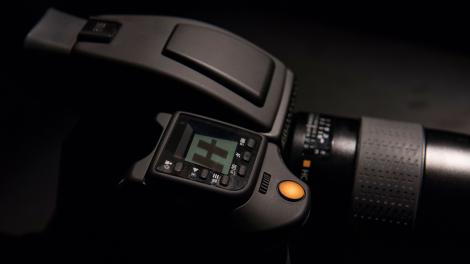 Hasselblad had a quiet 2015, but according to the company’s CEO, Perry Oosting, that was largely because of all the work going into the development of the H6D and the preparations for this year’s 75th anniversary celebrations.

Both cameras accept Hasselblad H system lenses and while the 100Mp sensor produces images that have ‘close to’ 1x focal length magnification of the 645 format focal length, the 50Mp incurs a magnification factor of around 1.5x. This means there is a difference in the framing when the same lens is mounted on each camera – it’s similar to swapping a 35mm full-frame lens from a full-frame camera to an APS-C model.

Both cameras use Sony CMOS sensors and Oosting is keen to point out that although the 100Mp model has the same chip as is inside Phase One’s 100Mp XF, Hasselblad’s is ‘Sony qualified’, where’s Phase One’s isn’t.

Hasselblad has also refreshed its entire lens line-up giving them a new shutter mechanism (they still have a leaf shutter) for faster shutter speeds. The two cameras’ shutter speeds may be set in the range 1/2000 – 60seconds depending upon the lens. As usual with Hasselblad lenses, flash will sync with any shutter speed – that’s a benefit of the leaf shutter.

Both models are capable of shooting Full HD video, but the 100C can also record 4K (3840×2160) movies. The maximum continuous shooting rate has yet to be specified, but demands of video recording, especially 4K have been met by the presence of a CFast card slot. There’s a secondary SD card slot which is sufficient for storing stills. Images may be stored on a tethered computer and there’s an HDMI port to connect an external monitor or storage.

The H6D doesn’t have an internal mic, but there’s a port to connect an external one as well as a headphone terminal.

Hasselblad has retained the familiar modular design of the H-series for the H6D, but it’s added a high quality touchscreen to make operating the camera and adjusting settings easier. All the gestures that you would expect to be able to use work, swipes, taps, double-taps and pinch zooms. A swipe down reveals a helpful control screen that allows you to change key settings such as exposure mode, sensitivity, shutter speed, aperture and white balance.

Unusually, it’s not possible to focus automatically in Live View mode, but this is believed to be coming with a firmware update. The optical viewfinder is unchanged from the H5D and is clear as a bell while the main screen is superbly sharp, showing lots of detail. A double-tap of the screen zooms in to 100% to assist with focusing and its easy to get the subject sharp.

Like the H5D, the H6D has an ergonomically shaped grip that makes it comfortable to hold, although it is still heavy.

In the past photographers, amateurs and professionals bought medium format cameras because the bigger film frame automatically translated into higher quality images that could be printed at much bigger sizes. These days medium format digital cameras don’t usually have the same size sensor as medium format film, but the H6D-100C comes close with a sensor that is near to the 60 x 45cm of 645 format, especially when you allow for the rebate typically found around the 645 film/negative frame.

Cramming lots of pixels onto a sensor can be a recipe for noisy images, but high resolution 35mm full-frame cameras like the Nikon D6810 and Sony Alpha 7R II have proved that technology is advancing all the time. Medium format digital cameras like the Pentax 645Z and Hasselblad H5D-50C have also been found to deliver the superior image quality that many professional photographers require. It’s entirely feasible that a larger 100Mp sensor can do the same, and it enables 98 x74cm (38 x 29inches) prints to be made at 300ppi.

So far we haven’t been able to shoot with the 100C, we’ll have to wait until June for that. The images from the 50C look great, with a just the tiniest hint of noise at ISO 1600 and impressively wide dynamic range. Hasselblad claims it possible to record close to 15EV in one shot with the 100C.

The camera’s autofocus system isn’t a patch on the average compact system camera or SLR for speed, but it’s fast by medium format standards. The clever True Focus system also adjusts for the slight shift in focus that’s required when using the ‘focus-and-recompose’ technique when the AF point does conveniently lie over the subject.

For many photographers, even professionals, an image size of 50Mp is more than enough and the handling improvements as well as the likely image quality improvements brought by the H6D-50C may be enough to convince them to upgrade. However, I suspect that it’s the H6D-100C that will be the bigger hit. Those looking to upgrade a H5D-50C or H5D-60CCD to a 100C will be given a trade in value of £8,750, which could be a very persuasive argument. Upgrading the same camera to a 50C attracts a trade-in value of £8000.

Traditionally the downside to using medium format cameras is that they are slow to use and heavy to carry. The H6D is still heavy but it’s much faster than earlier medium format cameras. The touchscreen is also responsive and it’s easy to check settings and make changes as you need.

Excitingly, Hasselblad’s Perry Oosting tells us that the company will be turning its attention to the enthusiast sector of the photography market next. Could that mean that there will be a more affordable Hasselblad medium format camera in the near future? One things for sure, we won’t be seeing a return of the likes of the Lunar that disguised Sony cameras with expensive woods and metal finishes.