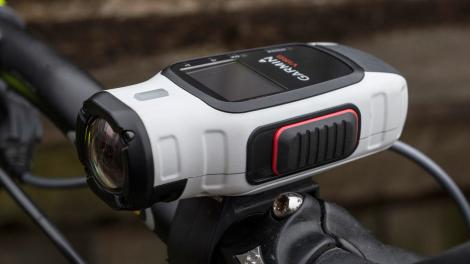 The action camera market is starting to settle down, with a familiar formula of ultra wide-angle lens, ultra tough exterior and small size. Despite the recent explosion in the number of action cameras on the market, it’s rare to see a device with a new feature outside of improvements in core technologies such as resolution and frame rates.

But Garmin is a big name in GPS, producing location-tracking car and personal navigation devices used by many outdoor enthusiasts. Perhaps it’s no surprise, then, that Garmin has entered the action camera market with a camera that incorporates GPS technology.

The Virb blends the action camera functions with GPS technology to give you a bit of both in a careful balance. It offers a maximum video resolution of 1080p at 30 frames per second and it also offers GPS data recording, though not navigation or route planning.

Up against rivals in both the action camera and off road GPS markets, the Virb’s features seem decidedly light, with limited high quality video or navigation options. Really, it offers just the basics, but it balances these features in a usable way that will appeal to everyday users, and make the experience of using this action camera that much better for it. It has a small but perfectly visible screen, image stabilisation and a huge three hours of battery life.

That’s all well and good, but is GPS really a feature that will help the Garmin Virb makes it mark in an increasingly crowded action cam market?

The Virb’s design stands out; it is at the moment the only camera that has gone for a bright white outer casing. Initial worries that this will become marked and grubby are quickly realised, but with a quick wipe down after a ride that white glow is quickly recovered. In fact, though, a little dusting of dirt actually adds to the appeal of the design.

Design wise, the Garmin is like the Drift Ghost-S and goes for a mixture of the bullet and box design, which makes it slightly larger than many of its rivals. However, this additional size does make it easy to handle, with direct access buttons that cover the side of the case. The small screen is contrasty and although relatively low resolution when compared with smartphones, it’s easy to see in bright sunlight and enables quick settings changes when needed.

A design feature that really standout is the slide switch on the side that is used to start and stop recording. This is very similar to the control on the iON Air Pro 3, though without the vibration indicator. It enables quick operation and you know if the camera is recording simple because of the position of this switch. This saves you having to visually check if you’re filming, which is useful when the Virb is mounted on a helmet. This slide switch automatically activates the camera so there is no need to power up before recording.

The small screen enables you to easily navigate settings, or you can use it as a live view. This is generally a luxury in the world of action cameras, but on the Garmin it feels like a sensible addition.

Down the side of the camera are four buttons. The power on button doubles as the mode button once on, then the navigation buttons enable you to switch between screens and confirm settings. Navigation is quite simple and finding and changing modes and settings is very straightforward with a good responsive feel even when wearing gloves.

On the back is a rubber flap under which are hidden the camera’s connectors, including USB and HDMI. This flap should be good enough to protect the camera from a typical heavy downpour, but although Garmin says that the camera is waterproof to 1m, I’d want to have it in the more secure waterproof housing before it was submerged.

On the underside of the camera is a hatch for the battery and card slots. This follows exactly the same design as many of the Garmin handheld devices and as long as you have a decent capacity micro SD card – 32GB, for example – there should really be no reason to access this during your three hours of recording time.

Mounts are all important and here Garmin has created a quick release cradle system that enables you to remove the camera from any mount it happens to be attached to. This design is one of the best that I have used. All of Garmin’s mount parts right down to the bolt design have been finished to an exceptionally high standard. The other advantage of this mount system is that Garmin has followed GoPro’s mount style, so with the use of the adapter that comes in the box you can then start to attach the Virb to any GoPro Mount.

As well as direct control the Virb also enables control from either Android or iOS devices. Connection simply involves activating Wi-Fi on the camera and locating the network on your mobile device. The network and password are displayed on the Virb’s screen, so there is no searching around to try to establish the details. Once connected, the app enables you to adjust all of the cameras settings as well as access live view and start recording – surprisingly, though, it doesn’t enable you to play back footage from the Virb to your mobile device. The design of the app is very slick and connection during the test was very reliable.

Options for video resolution are limited but the actual quality of video playback is very good, showing good, natural colour that resolves plenty of detail and tonal graduation. Moving from dark to light areas does show a slight delay in the change to exposure, but the exposure balance is quickly corrected. Within the video options you can also change the field of view through three zoom settings; using these does slightly reduce the image quality but due to the motion of most footage you’d be hard pressed to actually see the difference.

The ability to shoot stills has also been well thought through and the quality is surprisingly good. It has a maximum resolution of 16Mp and as with the video footage the images’ colour and tone are reproduced naturally with plenty of detail. Still images do have a noticeable but acceptable barrel distortion that you’d expect from an action camera.

GPS is really where this camera stands out, and it will automatically record the your location. This data can then be picked up later when it comes to editing the footage, and used in any way that you see fit. The Virb is also ANT compatible – this technology enables you to connect and control the Virb using other ANT devices, so this makes the Virb an ideal choice for anyone using a recent Garmin Edge cycle GPS or other ANT enabled hardware.

GPS features can all be accessed in-camera and seen on the screen. This section is called the Dashboard and shows details of time, compass, speed and elevation. If connected to an ANT device you can then see further information such as heartbeat, cadence and temperature, depending on what other devices you have.

As well as the mobile app, Garmin also supplies its own video editing software, and while this is relatively basic it does the job and is well worth a look.

The Garmin Virb is a well designed action camera that takes a conservative approach. Although it has a good list of features, it doesn’t push the boundaries and simply does what it needs to do in order to capture great quality footage. This is an action camera for those who have a more cautious approach to extreme sports, so while you could use it for base jumping, it’s probably better suited to a weekend off-road ride or a week’s skiing with the family. It also does away with many of the complexities of its rivals and is one of the more refined cameras presently available in this sector.

The Virb manages to pack in a host of features, including GPS, which will appeal to many. It also has an impressive 3 hour battery life and is extremely easy to use. The side switch for recording and small but contrasty LCD all add to the intuitive operation.

The conservative approach to video settings restricts creative edits, so resolution has to be dropped in order to capture slow motion footage. The accompanying app is well designed for the most part, but an inability to playback footage is a let-down. Despite the 1m waterproof specification, the Virb is really only water resistant unless you get the optional waterproof case.

The Garmin Virb is an exceptionally well-thought out action camera that does what it has been designed to do, and it does it well. At this price point it sets a benchmark for quality and the design and materials used in its construction look and feel great. The lens and sensor produce stunning footage with the added bonus that the camera records GPS data at the same time.

If you’re looking for a good reliable camera with GPS then this is really the only choice. The no-fuss approach to control and adjustment is intuitive, and the three hour battery life does mean that for most activities you don’t have to worry about carrying additional batteries. But you will need to look elsewhere if you want wireless playback on your mobile device, fast frame rates for slow motion footage or resolutions above 1080p.