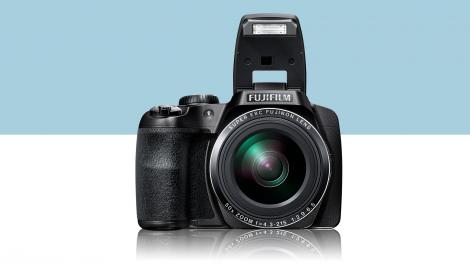 Outwardly the new cameras are identical to their predecessors, but one notable upgrade is a boost in the resolution of the electronic viewfinder (EVF) from 201,000 dots to 920,000 dots, which produces a much smoother and sharper image.

Another improvement is in the Wi-Fi functionality of the S9900W. With the S9400W you could only transfer photos from the camera to a smartphone or tablet over Wi-Fi, but the S9900W adds the facility to control the camera remotely, using the Fujifilm Camera Remote app.

Other key specs are the same between the new pair of cameras and the old. The 50x optical zoom gives you an equivalent range of 24-1200mm in 35mm terms, and the maximum aperture ranges from f/2.9 to f/6.5. There’s a three-inch, 460,000-dot LCD screen, and the cameras can record full 1080p HD video. Fuji says that the AA batteries which power the S9900W yield around 400 shots.

The S9900W is a fairly large camera – you could mistake it for a DSLR at first glance. A textured coating encases the grip, which, along with an indent in the grip for your finger, helps it sit comfortably in the hand. Along with the customary zoom switch around the shutter release button there’s a second zoom switch on the lens itself, which is handily within reach when you’re using your left hand to steady the camera.

The EVF is fairly small, and you need to press a button to turn it on, and the main screen off. You need to press the button again if you want to view the image you’ve just taken on the rear screen, which makes for a bit of an awkward transition – so much so that you may find you only use the EVF when very bright sunlight makes it difficult to use the screen.

Most of the S9900W’s key settings can be adjusted via a group of buttons on the right of the rear panel, all of which are within easy reach of your thumb. The ‘up’ segment of the four-way keypad is customisable – it accesses the ISO (sensitivity) setting by default, but you can assign it to one of ten other functions if you find yourself often wanting to change a particular setting.

As well as a range of automatic modes, there are also manual and semi-automatic modes, which are selected via the mode dial on the top of the camera. Unfortunately there’s only a choice of two or three aperture settings (depending on the focal length you’re using), which is a little restrictive.

Unlike some bridge cameras on the market there’s no option to shoot raw images, so you only have JPEG images to play with. However, in good light the S9900W performs well, producing images that contain plenty of detail.

If you examine shots at 100% it’s possible to see some image smoothing throughout the sensitivity range, but it’s not uncommon for sensors of this type and it doesn’t impact on images at normal printing or web viewing sizes.

When it comes to low light shooting and higher ISOs, however, the S9900W is rather less impressive. Both image smoothing and noise are visible from around ISO 800 when images are viewed at A4 print size, while it’s advisable to keep to ISO 3200 or below for small print and web sizes. The highest setting available is ISO 12800, which is best avoided unless you really have to get the shot.

Our lab tests indicate that detail resolution isn’t quite on a par with cameras such as the Nikon P610 throughout the sensitivity range.

Most of the time, the S9900W’s automatic metering works well to produce accurate exposures, requiring just a touch of exposure compensation in very high-contrast situations. The camera’s auto white balance works well in a range of conditions to render colours accurately – even artificial lighting doesn’t confuse it too much.

Detail is maintained well throughout the zoom range – there’s a little loss of detail at the longest settings, but it’s not too noticeable – and the S9900W’s image stabilisation system helps to minimise blur caused by camera shake when shooting at long focal lengths.

Autofocus speeds are quick in good light, but darker conditions prove to be the S9900W’s nemesis, with the AF taking two or three seconds to achieve focus in lower light. Operational speeds are a little lacklustre when the camera is called on to perform heavy processing too – if you’ve fired off a burst of shots, for example, it can be several seconds before the camera is ready to shoot again.

In the crowded bridge camera marketplace there’s nothing that really makes the S9900W, or the Wi-Fi-less S9800, stand out. While they’re capable of capturing good-looking pictures, this is very much dependent on the light being good.

The zoom range is generous, but 24-1200mm is fairly standard these days, and what were once enticing extras, such as Wi-Fi, are now pretty bog-standard offerings – although the S9900W’s remote shooting feature adds a touch of Wi-Fi assisted novelty.

The camera is easy to use, and for day-trippers the fact that it uses AA batteries means that as long as you carry spares you won’t have to worry about having access to a power source. But it would be nice to have the option of shooting in raw format, while a sensor would obviate the need to press a button to switch the electronic viewfinder on and off.