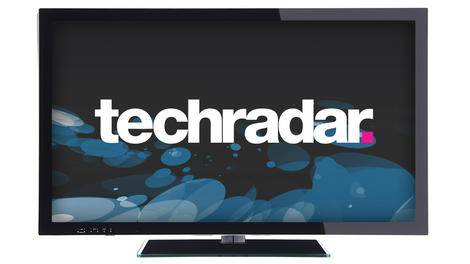 Finlux isn’t a brand we’ve been too familiar with of late, but its recent revival as a web-only business has seen a rush of thoroughly affordable LED-backlit and even 3D TVs hit the virtual shelves.

The key 40-inch size in its range is represented by the Finlux 40S8070-T, which comes to use with a luscious design alongside all the must-haves of the modern TV age. A Freeview HD tuner, Full HD resolution, USB playback, networking, smart TV apps – including BBC iPlayer, YouTube and social media – alongside four HDMI inputs and USB recording are all present.

The Finlux 40S8070-T – which, oddly, bears no Finlux logo on its front – is also a great-looking TV. It claims a frameless design that’s really nothing of the sort, though the use of a single pane of glass across the front is on-trend. 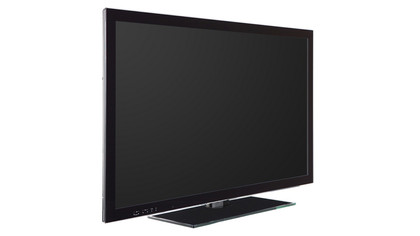 It reminds us of LG and Sony TVs, and though it’s attractive there is the issue of screen reflections. The Finlux 40S8070-T is best watched in a blackout and certainly shouldn’t be positioned opposite a light source.

Although ‘frameless’, there is a gap of 33mm/1.3 inches between the edge of the TV and the screen, with a further 2mm/0.08 inches of black around the image. There’s also a 2mm-thin transparent edge around the Finlux 40S8070-T, which catches the light nicely and lets off the odd sparkle.

In terms of screen depth, the Finlux 40S8070-T measures around 40mm/1.57 inches deep, which is reasonably normal at this price. 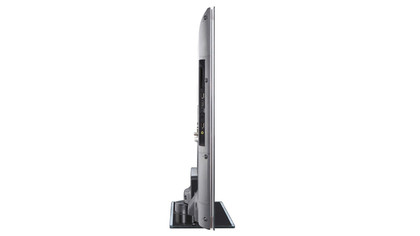 Owned by Turkey-based TV makers Vestel – the third largest television manufacturer in the world, with 25% of the UK market – the Finlux brand now covers a fast-growing range of LED-backlit LCD TVs that are closely mirroring the major developments in the bigger TV brands’ lineups. 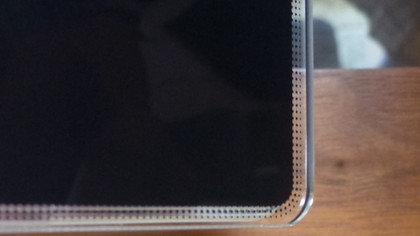 Aside from its Freeview HD tuner, the Finlux 40S8070-T is all about apps. The smart TV portal on the TV is a slightly antiquated version compared to newer TVs in the Finlux range, but there are actually more apps available here.

As well as BBC iPlayer, Facebook, Twitter and YouTube, the Finlux 40S8070-T adds Viewster, CineTrailer, ITN, Foreca, TuneIn Radio, MeteoNews.TV, Solitaire Club, Autozine, eBay, iConcerts, Joomeo and Qualifiers 2014, most of which won’t get used much but could be mildly diverting. It’s a shame that the likes of Now TV, Netflix and Lovefilm don’t appear. 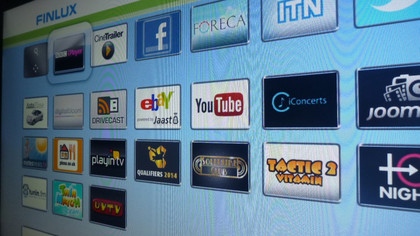 As well as this grid of apps, the Finlux 40S8070-T has four sponsored areas at the bottom of the screen sporting links to CineTrailer, Twitter, Facebook and Picasa, the latter of which doesn’t appear to be available as a dedicated app elsewhere.

Unlike its largely second-rate apps, the Finlux 40S8070-T’s ins and outs are exhaustive. The headline act on the back has to be three HDMI inputs, though there’s a fourth available on the side panel, too. Underneath those HDMI slots on the rear are two Scarts, a VGA input for a PC, and a set of component video inputs.

Audio is dealt with by an optical digital audio link, a subwoofer output and some stereo audio outputs. Elsewhere on the side panel is a composite video input, which is useful for legacy games consoles and camcorders – two USB slots, a headphones slot and a Common Interface slot for adding channels to the Finlux 40S8070-T’s built-in Freeview HD tuner. 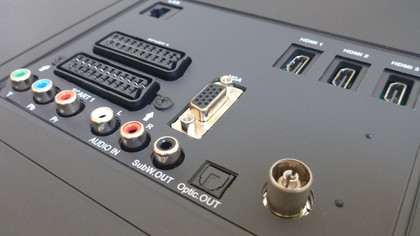 Picture processing circuitry is limited, as are tweaks and adjustments, with only the likes of skin tone, colour shift and RGB Gain controls to experiment with, precluding any kind of extensive calibration.

However, in addition to a 100Hz mode, the Finlux 40S8070-T does possess an HDMI TruBlack mode and a notable frame interpolation option. The latter, called Movie Sense, is available in several strengths and – if it’s effective – could introduce a dizzying realism to Blu-ray discs that removes judder and creates a flowing, video-like look, much like upping the frame rate in the recent movie The Hobbit. It’s not to everyone’s taste.

Finlux also provides a mini CD copy of Nero MediaHome 4 Essentials for streaming via DLNA from a Windows computer, though that was no good for our Windows netbook or our Mac. Who uses discs? Surely it should be a free download. It’s especially ironic, because the Finlux 40S8070-T is only available to buy online. 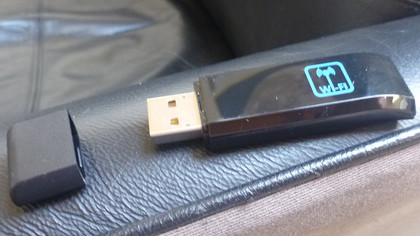 Although you might think that the Finlux 40S8070-T is aimed at living rooms looking for a basic big screen TV, it actually excels with the likes of Blu-ray while struggling with digital TV and DVDs.

Although not the sharpest HD detail we’ve ever seen, our Blu-ray test disc Hugo was free from both blur and judder (the 100Hz mode really does its job), but a standard definition broadcast of Homes Under The Hammer on BBC One looked soft and unstable. 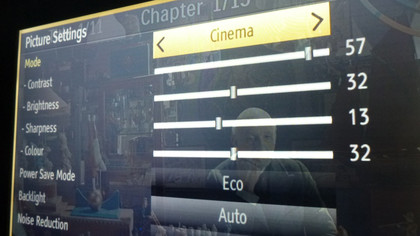 There is some basic noise reduction software, but it doesn’t help – if anything, it makes the picture less watchable by introducing a slight wobble. The same goes for DVDs.

Colour in general is good, though peak whites do suffer from haloing and a little glare. The latter is obvious in the opening sequences of Hugo as the camera weeps across Paris and into the train station. 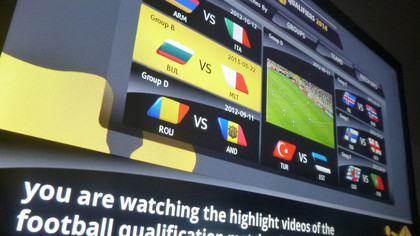 It’s a challenging shot for a TV to display accurately and smoothly, but the Finlux 40S8070-T does a pretty good job. Smoothness, in particular, is obvious and the detail remains remarkably intact with no detection of judder.

That’s with Movie Sense switched on in its medium power mode. This film interpolation tech proves a key feature; engaged on high power it does introduce some artefacts around fast-moving objects, but the video-like fluidity it brings to Blu-ray discs even on its lowest setting shouldn’t be missed. 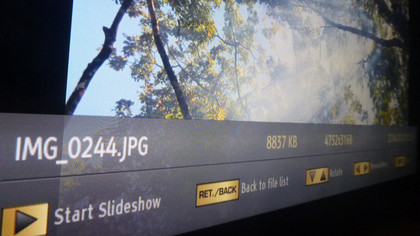 However, black response is pretty average, with dark areas of the picture tending to fade into each other – and it’s best to completely avoid the HDMI TruBlack option, which immediately increases clouding and decreases both shadow detail and the intensity of black.

If you are planning to regularly watch the Finlux 40S8070-T in a blackout, know that there is some LED light leakage from the bottom-right corner and upper sections of the panel as well as an overall blotchy look across the middle.

This isn’t unusual on budget LED-backlit LCD panels, and in everyday use you probably won’t notice it.

If it’s easy to pick out this television’s budget heritage from its so-so images, it’s much harder when judged on its unexpectedly polished user interface.

Instead of a clunky home screen, when you hit the Menu button on the remote a simple carousel of yellow-on-black icons appears. It’s then easy to access the Picture, Sound, Settings and Media Browser menus. 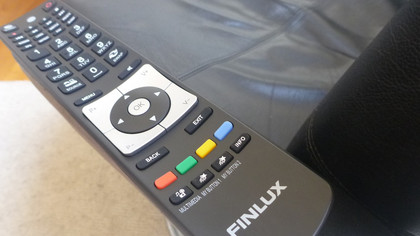 Where the Finlux 40S8070-T’s operation is disappointingly basic is with its EPG, which has no programme synopsis, no live TV thumbnail and no sound, which makes scrolling through its nine channels a lonely experience.

That’s a shame because its functionality is otherwise excellent, with two-touch recordings to USB and several different filters and views possible. 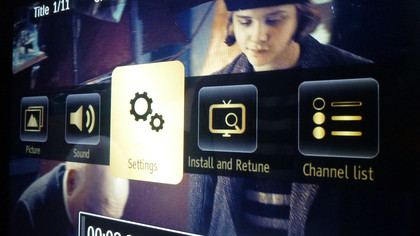 The smart TV user interface is very basic, and reminds us of first-time attempts by bigger brands a couple of years ago. But it’s not difficult to use, and firing up the platform is quick thanks to a shortcut on the remote.

Still, we’re not sure why YouTube has its own direct access button but BBC iPlayer doesn’t. Even then, the labelling is far from clear – YouTube is accessed by one of two buttons sporting a graphic of a star and labelled My Button. 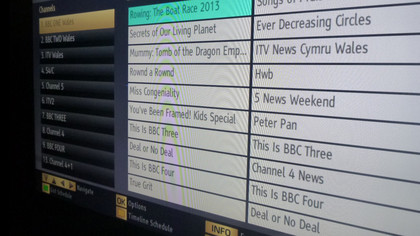 Elsewhere the remote control is a letdown – unlike some other Finlux remotes we’ve used – principally because it’s overly long and rattles. Feeling cheap in the hand, some of the buttons are simply too big, with small writing and/or positioned at the extremities.

The smart TV key, for example, is out of reach in the top-left corner, while the EPG button is hidden among less important controls to change language and aspect ratios. 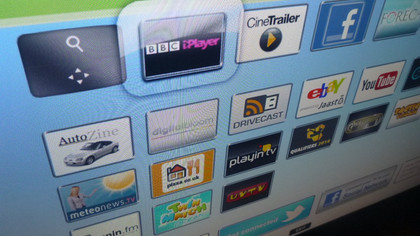 Digital media is a tad manual in how it’s handled – you must select what type of media you want to access before locating the drive, then the folder – but the core video codecs are all here.

In our tests we managed to get the key AVI, MKV and MP4 file formats to play, the latter two in HD, though other files such as WMV are also supported. Music comes in MP3, WAV and WMA formats only. 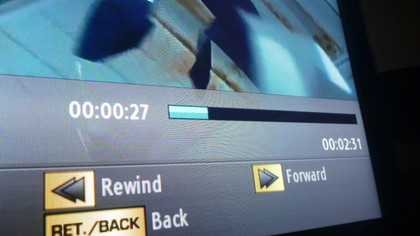 The Finlux 40S8070-T’s 8W speakers are not good, producing a rather muffled sound that lacks any kind of width. There are a few preset user modes, including Music, Classic, Flat and Movie, but only the latter has any semblance of low frequency sound – and it’s slight indeed.

Seeing as the Finlux 40S8070-T has an optical digital audio output – something that’s not common on budget TVs in general – we would recommend adding a soundbar, a home cinema system or indeed any kind of hi-fi speakers, which would enormously improve on the all-round perception of the Finlux 40S8070-T. 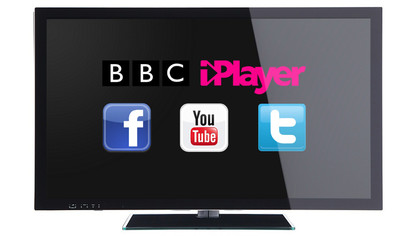 However, the 40-inch size is pushing the upper limits of what can be achieved with a relatively basic LED-backlit LCD panel and no fancy picture-boosting processing tech. What works on a 32-inch TV doesn’t usually come across anywhere near as well on a 40-inch version.

A terrifically good value package that breaks new ground at its price-point, or a slightly too ambitious attempt at a big screen TV?

We’ve got no complaints about the packing-in of features on the Finlux 40S8070-T, but a lack of consistently good upscaling processing makes this a TV that excels only with HD material.

The provision of four HDMI inputs and a couple of USB slots – as well as that Wi-Fi dongle – bring the kind of convenience often ignored on budget TVs, and that goes double for the Finlux 40S8070-T’s Freeview HD tuner and BBC iPlayer app.

It handles the core digital video and music files, delivers enough HD detail in accurate colour, banishes judder and most blur, and the user interface is a cinch to skip around. Lastly we must mention its design; a single pane of glass that stretches across the entire front of the product is pure class.

The one pane glass design also tends to attract the odd reflection. Apps-wise, it would be nice to see some more catch-up TV and film streaming services, such as Now TV, Lovefilm and Netflix.

After a barnstorming start with its awesome design, multiple HDMI inputs and apps aplenty, the Finlux 40S8070-T limps over the line after a picture performance that squeaks a pass mark.

It’s not that it’s at all unwatchable – quite the contrary – but it lacks the kind of versatility needed in a living room where standard definition is just as likely to be watched as the latest Blu-ray discs.

That’s a shame, since its all-round feature count is versatility defined, with the inclusion of a Wi-Fi dongle and access to both YouTube and BBC iPlayer – albeit from within a slightly dated-looking smart TV portal – is good value indeed.

Box-tickers looking for an all-rounder might find the Finlux 40S8070-T hard to resist on paper, but judged on both usability and picture quality this television lacks the finery that will cost you a further £100-£200.

There are few 40-inch smart TVs this affordable, but a close rival of Finlux at this level is LG, whose 42LS570T is similarly high on value. Also with four HDMI slots, the LG 42LS570T adds a USB slot and a far sleeker smart TV user interface that boasts many movie streaming apps and a fuss-free SmartShare link between TV, tablet, phone and PC.

It might also be worth monitoring new TVs from Panasonic, whose TX-L47ET60B from its ET60 Series adds passive 3D tech to a much more advanced smart TV platform.

If neither smart TV, 3D or Freeview HD are on your shopping list, Toshiba’s simple Edge LED-backlit 40BL702B sells for under £300.