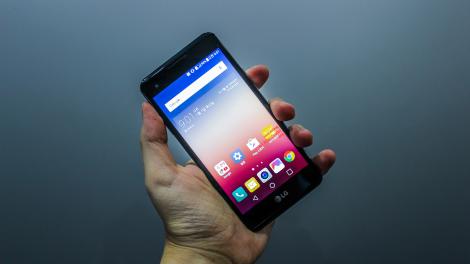 The LG X Style is determined prove that just because an Android phone is logged in the mid-tier doesn’t mean it has to be a chunky plastic eyesore. It can have class too.

Okay, the LG X Style that I tested in Seoul, Korea is still made of plastic, but it remains thin and light compared to a lot of monster-sized budget phones that we’ve reviewed. It’s down to 6.9mm.

This may be the more attention-grabbing phone when someone walks into a store looking for a cheap Android phone, one that looks like a flagship but doesn’t cost a lot of money. Here’s how to handles.

It’s all about looks with the appropriately named LG X Style. Its has a thin and light design and 5-inch display size at 720p, which most phone owners find reasonable to hold in one hand.

It has subtly curved edges that slope off the top and and bottom of the phone. It’s nowhere near as dramatic as holding the curved Samsung Galaxy S7 Edge sides, but it’s a nice touch nonetheless.

It’s so thin, in fact that the bottom hardly fits the 3.5mm headphone jack and microUSB port. New phones like the Moto Z and Moto Z Force eschew the jack, and so might the iPhone 7. Thankfully, LG didn’t go the same route.

LG has announced three colors so far: Titan, White, Gold. However, I spotted a fourth, possibly Indigo, color when testing out the new LG X Style phone earlier this month. Stand by for confirmation. 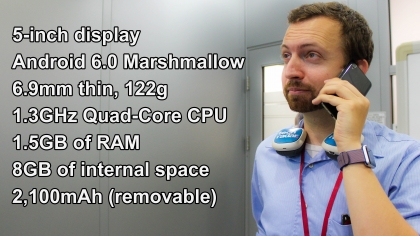 You’re not going to find a lot of horsepower behind the LG X Style. Like a lot of things in life, looks are fleeting. This doesn’t have the LG X Power battery or LG X Mach faster chipset.

Instead, the LG X Style specs gets away with a 1.3GHz quad-core processor and 1.5GB of RAM. It has 8GB of internal storage, but it’s of the slightly slower eMM variety.

The good news is that this LTE phone runs Android 6.0 Marshmallow just fine from what I saw at the LG offices. It also has an NFC chip inside, but so far that’s only destined to work in South Korea.

LG X Style has an 8MP camera and 5MP front-facing camera. That’s about par for the course on a mid-range Android phone. If you’re looking for something extra, go with the dual-lens LG X Cam instead.

The X Style has one more thing in common with the current LG G5 flagship: a removable battery. You have to take it out the old-fashioned way (by peeling off back the cover).

Even at a 2,100mAh capacity, this phone should still get you through a full day given the fact that the specs aren’t going to be taxing the battery life over 24 hours.

The LG X Style looks and feels closer to a flagship phone thanks to its thin and light design and curved top and bottom edges. There’s definitely some flair to this plastic mid-range handset.

It’s not going to fool anyone into thinking you have a top-tier phone, and the specs really don’t match the top of the line handsets from LG and Samsung. It can, however, run Android 6.0 Marshmallow just fine.

We’ll have to dive deeper into the LG X Style performance when the phone becomes available. It’ll roll out to Korea first, then Eastern Europe and Latin America and no pricing details have been made available.