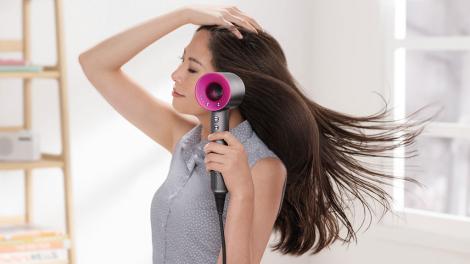 Primarily known for products that suck – calm down, we’re talking about vacuums – Dyson has also proven adept at machines that blow, too (hey now, what did we say earlier?), having refined its jet technology on its Airblade hand dryers and Hot + Cool fans.

Now, the airflow innovator has opened itself up to a completely different market, engineering and creating what it claims is one of the most technologically-advanced beauty products ever, with its new Dyson Supersonic hair dryer.

While it’s undeniably one of the most impressive hair dryers we’ve ever seen, the Dyson Supersonic doesn’t come cheap – the high-end device comes with a high-end price, and is only available in Australia on the Dyson website, and at Myer and David Jones stores for AU$699.

In the United Kingdom, the Dyson Supersonic is priced at £300 and is available on the UK Dyson site and at Selfridges.

So the real question is whether or not the added technological fanciness afforded by the Supersonic justifies its hefty price tag.

Though hair dryers have been around since the late 19th century, consumer models haven’t really changed much since then. In fact, it’s been over 60 years since the last significant evolution in hair dryer design, and that involved putting the motor inside the casing.

In typical handheld hair dryers, a bulky motor sits in the head of the device. This makes them awkwardly top heavy, and the motors themselves have a tendency to be loud, often overheating and burning out.

To remedy this, Dyson spent roughly AU$67 million in research and development on a new kind of dryer, using dozens of prototypes to dry 1,625kms of natural hair tresses over several years until it settled on the Supersonic design it has today.

So what’s different about it? For starters, Dyson’s engineers have come up with a much smaller and more efficient digital motor, which has the ability to propel 13 litres of air per second. Not only that, it’s moved the motor from the head of the device into the handle, which is why you can see straight down its barrel right through to the other side, much like Dyson’s aforementioned fans.

That’s not to say there isn’t anything fancy going on in the Supersonic’s head; it’s got a microprocessor that monitors temperatures 20 times a second, making sure it never overheats and burns out. Ordinary hair dryers will keep rising in temperature, which is why they give off a burning smell the longer you use them. Thanks to the Supersonic’s microprocessor, the device will actually prevent itself from going over a certain temperature (around 120 degrees Celsius), so you’ll never have to worry about your hair experiencing heat damage.

One of the Supersonic’s neatest and most convenient design elements is also its simplest – magnetised attachments and nozzles. It’s the kind of smart inclusion which makes it difficult to go back to lesser hair dryers, as it allows you to instantly snap on a diffuser, styling concentrator or smoothing nozzle (all included) without worrying about it falling off.

Inside the box, you’ll also find a non-slip mat and a little rope hanger, so that you can hang the Supersonic from a hook in your preparation area.

The most immediately noticeable aspect of the device’s performance (and probably the main reason it received the Supersonic name) is that it’s fairly quiet. It’s not absolutely silent or anything – you’ll still hear the powerful whooshing of air – but compared to any other hair dryer, the sound it gives off is much quieter and infinitely less irritating.

Aside from a power switch and a button to instantly turn the Supersonic’s airflow cool, there are two main buttons used to control the device. The first, which has a little picture of a fan on it, scrolls through three different airflow speeds, while the button to its right, which has a red dot on it, allows you to cycle between three heat settings.

The power level on each of these settings is indicated by three LED lights (white lights for power, red lights for heat) right above each button, making it easy to keep track of how powerful and how hot you’ve set the device.

In terms of drying speed, the Supersonic is on par with most devices of its kind, taking around 3-6 minutes to turn wet hair dry, depending on the thickness and length of your hair. Though it doesn’t get as (irresponsibly) hot as cheaper competing dryers, its sheer blowing power makes sure to get you well-coiffed quickly.

It’s important to note that the Dyson Supersonic is a corded product, so while it might’ve been extra impressive to have a cordless model in the same vein as the company’s excellent cordless vacuums, it would also come with significant drawbacks.

The unit would need to be bulkier and heavier to accommodate an in-built battery, and short battery life and long recharge times would make that proposition hardly worth investing in. Most people will be using the Dyson Supersonic in front of mirror anyway, so being tied to the wall is really no big deal.

Though it’s only got one real function (and one that’s hard to get wrong, at that), we can’t help but overstate just how well it performs that singular task.

The Dyson Supersonic is a pleasure to use, with its perfectly-weighted build, attractive design, easy-to-use settings and quiet-yet-powerful airflow, you really do feel like you’re using a high-end, luxury product.

Admittedly, the Supersonic is incredibly expensive for a hair dryer, costing 2-3 times as much as a professional grade hair dryer from a well-renowned brand like ghd, which are priced at roughly AU$250/£145.

With that said, Dyson execs have suggested that the Supersonic is so well-built, that it should last at least ten years – a much longer lifespan than most other hair dryers. The actual warranty on the device is only two years, however, so that’s not a guarantee set in stone.

Quite frankly, the device’s exorbitant price is its only real drawback. It’s likely going to be out of most people’s price range. However, if you have disposable income and want the best hair dryer you can possibly get, or if you’re a professional hair-stylist, you should look no further than the Dyson Supersonic. It really is the Porsche of hair dryers.