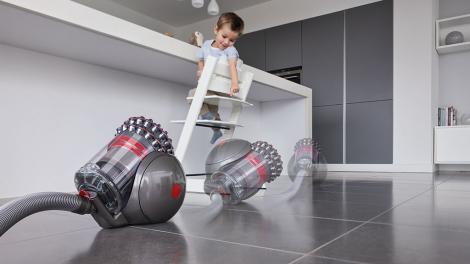 It’s hard to deny Dyson’s position at the forefront of cutting-edge vacuum technology, with most other vacuum makers regularly playing catchup in an arena that’s been dominated for years by the trendsetting company.

It’s easy to be instantly impressed by Dyson’s manoeuvrable and endlessly convenient stick vacuums, with their impressive suction, lightweight builds and attractive designs – all without the hassle of cables getting in the way. However, cordless vacuums do have their caveats.

Getting 20 minutes of vacuum time from a two-hour charge can suck even more than the device itself, and there are times when you require a more powerful and heavy-duty vacuum solution.

In these situations, Dyson’s new Cinetic Big Ball vacuum is a terrific alternative, offering the quality cleaning experience and reliability that corded vacuums are known for, without many of the usual hang-ups that make people want to go cordless in the first place.

One of the biggest frustrations that comes with using a corded vacuum is that it tends to constantly fall over or tumble as you drag it along behind you.

Granted, on the late-night infomercial scale of annoying first world problems, a ‘vacuum cleaner that constantly tips over’ sits just above the ‘milk carton that explodes in your face when you try to open it’ predicament – it’s nowhere near as big a problem as some would have you believe, though we’d gladly live without it.

To combat this problem, Dyson has developed a ball-shaped vacuum that automatically picks itself back up whenever it falls down. It’s sort of like the vacuum equivalent of the band Chumbawamba; the main difference being that even the Cinetic Big Ball can’t hope to achieve that level of immense suckage.

A clever design, the Big Ball’s spherical array is weighted at its base, creating a low centre of gravity which forces the vacuum back into the upright position whenever it falls over. You can even walk up and kick the Big Ball down, and, short of physically restraining it, it will always roll back into the right position. It’s got a decent cord length, too, allowing you to venture 10.75 metres from your power plug.

Though Dyson vacuums are easier to handle than most, there’s always room for improvement. Typically, vacuum handles are quite rigid, sacrificing manoeuvrability for sturdiness. However, Dyson has given the Cinetic Big Ball an articulated handle that allows for 360° movement, providing a much more comfortable and precise vacuuming experience.

As we’ve come to expect from Dyson vacuums, the Cinetic Big Ball comes with a number of quick release tools for all kinds of vacuuming situations. The entry-level model ($699 / £399.98) comes with a Combination tool for narrow areas, a Musclehead floor tool, and a smaller Stair tool, which lets you vacuum across the length of each step without overhang. If you’re willing to go as high as $999 (£449.99) for the Cinetic Big Ball Animal Pro (great for people suffering from animal fur-related allergies), you’ll also receive a Reach Under tool, a Carbon Fibre Soft Dusting brush, a Swivel Hard Floor tool and a Tangle-Free Turbine tool.

All of this is great, but the real showstopper here is the inclusion of a new Hygienic Dirt Ejector system, which is the kind of welcome addition that makes it hard to go back to the bin-emptying methods of Dyson’s previous vacuums.

On earlier models, collected dirt would constantly find its way into the vacuum’s hard-to-reach crevices, forcing you to either shove your hand into an extremely tight spot, or use a utensil (like a butter knife) to scoop out the built up waste. The Hygienic Dirt Ejector makes this problem a thing of the past, providing a new silicone collar along the inside of the unit which scrapes down from the very top of the bin, making sure that no compressed junk is left behind.

Its Cinetic Cyclone technology, in which a series of cones is used to spin air and separate microscopic dust particles (like dead skin cells, dust mites and other allergens) from the rest of your accumulated waste, is more efficient than ever before.

Normally, this kind of particle pickup would require the filter to be cleaned regularly, however, the Cinetic Big Ball’s particle separation is so fine and microscopic, that there is literally no need to ever clean or replace its filter. This means that the vacuum requires no maintenance whatsoever.

Though it has a lot of grunt under its theoretical hood, its design is what makes the Cinetic Big Ball perform so well. Its round shape prevents it from snagging on the corners of furniture, and you already know what happens when it topples over. Its swivel handle also performs admirably, taking the pressure away from your wrist and forearm so that you can focus on precision control. It’s also got a longer wand than previous models, extendable to 1,250cm, allowing you to access hard-to-reach places.

Admittedly, there were moments where blockage would occur in the back of the vaccum’s head. While the Tangle-Free Turbine tool performed just like its name would imply, the tube behind the brush would occasionally need to be manually unblocked so that vacuuming could continue.

It’s hard to fault Dyson’s Cinetic Big Ball. Its round design and self-pickup functionality takes much of the frustration out of vacuuming, and its articulated handle allows for vacuum control that’s easy on the wrists and forearms.

It’s got a great deal more suction power than Dyson’s cordless vacuums, making it the perfect vacuum for heavy-duty cleaning situations. We also love the fact that its filter never needs to be cleaned or replaced.

Though its vacuum head occasionally needs to be unblocked, and it still needs to be tied to a wall or extension socket to function, the Cinetic Big Ball is just about the best vacuum in its class.