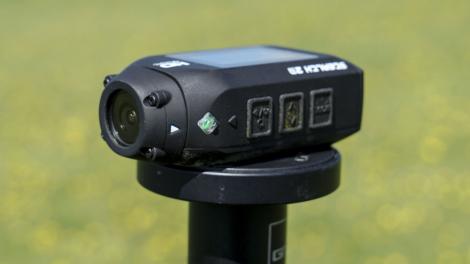 Action cameras generally follow one of two designs, box or bullet, but the small Stealth 2 is a mixture of the two. It looks very similar to the larger Drift Ghost-S with the same long rectangular shape, twist lock back, screen on top and rotating front lens element. This design made the Ghost-S exceptionally easy to mount, but the size and weight of the Ghost-S can be an issue, but while the Stealth 2 looks similar it’s 40% lighter and 50% smaller.

Physical appearance is where the similarities end because the Stealth films at 1080p at just 30fps compared with 60fps on the Ghost-S. The screen on top is just for navigating through menus rather than offering Live View, the battery is internal and it requires a waterproof housing if you want to venture into water. There are also a few differences with the way the Stealth works when it’s controlled by the mobile app.

For the most part, though, the Stealth 2 is still very much part of the same ‘get out there’ action-ready family, despite its differences with Ghost-S.

An action camera’s mount is always an important aspect of any system and while the GoPro mount is at present by far the most popular, Drift has been around for a few years too, so there’s a good selection of bike, chest to helmet mounts out there. Prices are very competitive and the mount quality is very high.

The mount itself is a simple compression clip – you just slot it in and it’s attached – yet despite this simplicity it holds the camera nice and firm with no play. which is important in order to avoid vibration when attached to moving vehicles or people.

This design also makes it easy to remove the camera quickly just by pinching the release tabs, so there are no fiddly knobs or bolts to undo. The compression clip itself fits to the bottom of the camera casing and can be removed to reveal a standard 1/4-inch thread, meaning that the Stealth is able to mount straight on to a tripod without the need for any additional accessories.

Settings and start/stop recording are all set through the three buttons on the side, with the illuminated LCD on top letting you know where you are and what settings you’ve selected. The mode button enables you to cycle through the modes, which include movie, stills, time lapse and burst and also give access to the settings. There’s also a handy car DVR mode which can be activated in the settings. Once the Stealth is on, the power button doubles as ‘select’ and the middle button enables you to scroll through the settings. All areas of the interface are well thought out and finding the settings that you want to adjust is all relatively easily.

The Drift 2’s big feature is the rotating lens that changes the orientation of the captured video – a small white triangle shows the position. This means you can quickly set the camera to record in a vertical format when it’s side-mounted on a helmet, or horizontal format when it’s mounted on a car bonnet, for example. This ease of adjustment makes the mounting process a much easier task than it is with competitors as there’s no convoluted mounting process needed to correct the camera’s orientation. This rotation is not just limited to 90 degree turns but can be rotated through smaller angles too.

As with the Ghost-S, a twist lock back protects the MicroSD card slot, HDMI and USB slots. This can be a little fiddly to use with cold hands, and impossible to undo if wearing gloves, but as the battery is built in there really should never be any reason to open the back when you’re out filming.

WiFi is a big action cam feature and the Stealth 2 connects through the Drift Connect app which works seamlessly and is one of the nicer action camera apps out there. Again, you see the slight limitations of this camera as full live is not possible – instead you have a still image showing what the camera is seeing and touching the refresh icon in the app refreshes the feed. This makes it good for adjusting the composition but you can’t really use it as a full live feed, which for an action camera really isn’t too much of an issue.

Viewing footage and stills that you have shot is also very easy and smooth, with the Stealth 2 saving down a smaller thumbnail video for this streaming process – and if you like you can save this version directly down to your mobile device.

All settings for video and stills quality can also be adjusted from the app’s interface, further enhancing the ease of use. Stills can be shot using the app up to 12Mp, though again the live view needs refreshing every to check the composition each time you move the camera, which is annoying. The app also features a zoom slider, although this is a digital zoom rather than optical.

Battery life for action cameras is generally not great, and an hour and a half is considered good. The Stealth 2, however, manages a massive three hours, and each time we tested the camera this quoted lifespan appeared accurate.

One feature with a difference is the car DVR mode, where the Drift 2 can be used as a car dashboard cam, a feature that has recently gained interest for insurance and liability claims. Setting this up is very easy and USB plugs are readily available for less than £10 – these plug directly into a cigarette lighter socket to power the camera. It’s a really nice additional feature that’s easy to use and could ultimately save you a great deal of time and money if you are ever involved in a crash (as long as you don’t cause it).

You cake a look at these sample videos to see how the Drift 2 handles different conditions and subjects.

Shooting in all resolutions the video quality remained consistent, showing a good amount of saturation, tone and detail. In slightly overcast conditions or when shooting indoors the quality of footage still looks great with good colour, tone and contrast and plenty of detail. In bright sunlight however, large areas of highly saturated colour quickly loose definition. In bright scenes the camera shows limited ability to capture a wide dynamic range with clouds burning out or suffering a pink or yellow tinging, and this restricted range also causes tonal detail to be lost. Footage captured in bright condition also has a warm hint that needs toning down during editing.

Within its limits, though the footage is high contrast and vibrant which does give it a pleasing look direct from camera.

Motion appears smooth with no dropped frames and as the speed of motion picks up our footage showed no signs of pixelation. The lens does a good job and gives the typical wide-angle action camera look. Taking a look towards the edges of the footage you are able to see softening of detail and signs of fringing but you’d generally expect from an action camera.

Garmin and GoPro offer their own software solutions but Drift suggest that you either use either iMovie or Sony MoviEZ both of which are relatively cheap and offer a fantastic range of editing tools.

The small size, compact design and the rotating lens make this camera incredibly easy to mount and this makes it stand out from its competitors. Features such as built in WiFi, the three hour battery life and car DVR make this camera very appealing.

Footage in bright sunlight can suffer from a limited dynamic range. Frame rates are limited at 1080p to a standard 30fps and you need to drop to 720p in order to access 60fps, so creative footage options are limited. Despite featuring Wi-Fi the lack of real time live view for shooting stills can be an issue and if you do want to venture into water then an additional waterproof housing is required, although it is relatively inexpensive.

The Drift Stealth 2 builds on the design features and usability of the Ghost-S, which is already a firm favourite with automotive enthusiasts, due to its discreet design and easy mounting options. The small size and weight now make what was a relatively heavy design with the Ghost-S a viable option for lighter weight vehicles and people. The stand out features are the lens design, which enables you to quickly adjust the orientation without the need for additional mounts, and the three hour battery life. Video quality is an issue in brighter conditions but many will like the added warmth and look of the high contrast footage.