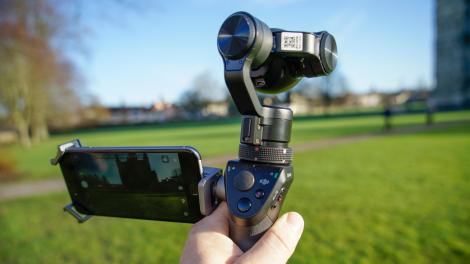 DJI is best known for revolutionising the multirotor drone market with the Phantom range, but now it brings its knowledge of image stabilised gimbals to earth with the unique handheld gimbal and camera combo known as the OSMO.

The OSMO is a camera system that enables you to capture your world from a personal perspective, and does so in a way the far exceeds the capabilities of regular action cams like the GoPro Hero4. This step up in quality isn’t down to the visual properties like tone, colour and detail, but the fluid stabilized footage made possible by the integrated gimbal.

This gimbal ensures that the DJI X3 12.4Mp camera is always level and stable, and in doing so cuts out the wobble usually associated with handheld camera work.

The handle features a series of buttons that enable complete control over the operation of both the camera and gimbal. Mounted on the side of the handle is a spring-loaded holder that neatly grasps a Wi-Fi enabled phone in order to further expand on the camera and gimbal’s operation, as well as acting as a handy live view screen.

Its unique design and the almost autonomous movement of the camera makes it look other-worldly. The OSMO promises the budding filmmaker or vlogger the ability to shoot professional stabilized footage that is as yet is unrivaled for the price by anything else on the market.

The majority of small motorised gimbals for GoPro and other action cameras are often gimmicky or time consuming to set up, but the OSMO is ready to go in seconds. Rival camera gimbal combos include the Yuneec Typhoon ActionCam, but although this does succeed as a handheld system, the ray-gun style design is still far behind the usefulness of the OSMO.

The OSMO combines a futuristic design with functionality and the device is solid and exceptionally well made. The gripped handle is an ideal size, ergonomic and comfortable to hold. Just out of the way located on the side of the grip is the power button, while the thumb-controlled joystick for manual movement of the gimbal, along with the start stop record buttons for video and stills, are all well positioned and easily accessible in use.

On the opposite side of the grip to the power switch is the phone mount, which flips out and enables you to quickly attach a mobile device. This is a high quality mound made from metal and can be removed so other accessories can be attached if needed.

The OSMO is a modular system. and on top of the handle is the motorised gimbal and camera combo, the X3. This can be swapped out for the X5 and X5R cameras that offer higher resolutions and Micro Four Thirds sensor and lens mounts.

The X3 is the base camera in DJI’s range but shoots exceptional quality footage enabling impressive 4K video capture at 25fps, as well as plenty of other resolutions including full HD at 120fps.

The lens features a 94-degree field of view (20mm equivalent) but, unlike other action cameras equipped with the Sony Exmor R CMOS 1/2.3-inch sensor, the OSMO’s footage shows well controlled distortion and has a focus range from 1.5m to infinity, making it far easier to film yourself and get close to the action.

In reality, the 1.5m minimum focus distance isn’t quite close enough for handheld selfies, although only close scrutiny of the footage would highlight the softness in focus and it’s still considerably better than the majority of action cameras.

Footage is captured on a microSD card that slots into the side of the camera and there’s a standard 3.5mm audio jack on the front of the handgrip, though at the moment this only enables automatic gain control, which will annoy even the mildest audiophile. You’ll also find a standard 1/4-inch tripod mounting hole on the side so accessories such as the mobile phone holder or tripods can be attached, although in reality this is really designed for the mobile mount and the design of the handle makes it impossible to attach a standard tripod base plate without an adapter.

Setting up the OSMO is quick enough, and if you’re familiar with the Phantom multirotors then the connection process is identical. You download and install the DJI Go app to your mobile device, power on the OSMO, select the OSMO Wi-Fi signal on your mobile, start up the app and select the OSMO by swiping through the devices.

Once it’s connected you have a speedy live view stream and access to all the camera settings.

The interface is well designed, but as this is a new concept, navigating around the settings and modes does take a while to understand, especially as there is both the camera and gimbal to take into consideration.

Across the bottom of the interface are the options and record button as well as settings to adjust resolutions, frame rates and other features.

The gimbal settings enable you to adjust how the mechanism reacts rather than taking control over its motion, and this could be ideal for custom panning and automated shots. Another nice feature is the ability to hold your finger on the screen then use the liveview on your phone as a trackpad to move the camera. The direction you drag your finger will determine the direction of rotation of the camera.

Camera settings are all pretty straightforward and as you’d expect, with resolution and frame rate control and sensitivity adjustments.

Starting filming is simple enough – just hit record and your movie is started, hit the record button again and it stops. During recording the thumb joystick can be used to adjust the pitch, roll and yaw of the camera. One further control can be found on the back of the grip; this is a trigger device and can be used in modes to activate difference commands. In normal recording mode, a triple click will spin the camera round for a selfie – repeat this and it will spin back to forward facing. Hold down the trigger and the camera’s direction will lock so wherever you point the camera it will remain.

After a short time spent using the different features and button commands, the use of the OSMO becomes very intuitive.

The X3 camera features very similar headline specifications to those of the GoPro Hero4 Black, with 4k video capture at 25fps compared with 30fps for the GoPro and full HD at 120fps on both. Settings all need to be selected through the DJI Go app interface on a mobile device and are all easy enough to select and navigate. There is even a manual mode so you can adjust the shutter speed and sensitivity, which is handy in low and harsh lighting conditions.

The camera itself does cope well with light changes; moving the camera from shade to light shows that the exposure adjusts smoothly without burning or blacking out through the transition. As the light falls, noise does become apparent in the footage, but for this sized sensor that is common and the noise reduction keeps the noise levels under control. There is some scope for the manual adjustment of the sensitivity for video from ISO 100-3200.

• This footage was shot directly into the sun. Here you can see how well the OSMO deals with the contrasts in exposure across the screen.

• The small motorised gimbal does a superb job at cutting out the usual wobble associated with handheld footage. The position of the Joystick just by the thumb enables you to easily point the camera in the direction you want.

• The design of the camera and gimbal make it incredibly easy to operate one handed with all basic controls reachable from the grip.

• The extended focus range of between 1.5m and infinity, compared with the X3 camera that features on the Inspire 1, means that you can shoot relatively close to your subject or capture these close-up panning shots.

• At a distance the panning shots are really impressive. A bit of concentration while shooting will also cut out the bobbing effect!

• When challenged with contrasting exposures and different lighting temperatures the OSMO manages to keep a good balance across the frame.

Colour and saturation are all fixed with no way to change any of the parameters, which is a shame. However, the auto white balance and saturation do a good job of balancing the colour and there’s plenty of detail in the tones.

The X3 high video quality can be attributed to the maximum bit rate at which footage is recorded. In our test at 4K our clip showed an average bitrate of 60mb/s, while dropping the resolution to full HD at 60fps the bit rate showed at 40mb/s.

This bitrate is high when compared with many other cameras that feature a sensor of the same or similar size, and this means that motion looks incredibly smooth and rich during playback.

The design may look odd but it instantly makes sense when you use it, and any apprehension that the sphere camera, gimbal and handle construction might be delicate is instantly dismissed once you have it in your hands. The mechanics of the gimbal, camera operation and connection to the mobile app all work incredibly well. Most importantly the video quality is exceptional, and this lightweight device enables filmmakers to capture professional stabilized footage in a way that would have been difficult or impossible previously with this kind of budget.

Despite the well thought out button layout and design, there are a few issues. The construction is solid but this is not a device that can just be thrown into a bag so is best stored and carried in the semi hard case supplied. That’s not saying it’s delicate but is just seems best not to tempt fate. The only mount on the handle is used by the mobile phone holder, and even if this is removed the shape of the handle makes it impossible to mount a standard tripod base plate without the special adapter. A simple mount on the base of the handle would have been an ideal addition, but this would be tricky because this is where you access the battery. And although there is a socket for an external recorder, its positioning makes it difficult to utilize.

The DJI OSMO gives you the ability to film in a way and style that was only previously possible with professional kit. Setup and use straight from the box is incredibly easy and the unit is exceptionally well designed, with no additional wires bolts or screws that are so often found on the action camera equivalents. If you need to shoot free, handheld video then the smooth fluid motion you get here is really unrivaled at the price.

There are a few minor issues, such as the positioning of the audio in socket and the feeling that as yet the full potential of the device has yet to be fully realised, but compared with anything else on the market the OSMO is a videographers tool that enables you to quickly capture incredible shots that would otherwise not be possible.