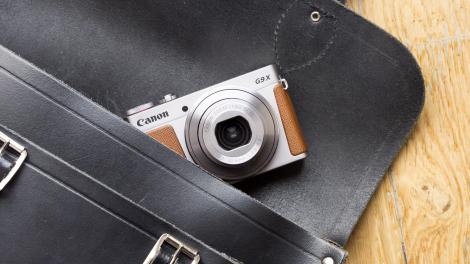 It’s every keen photographer’s dream – a camera with a decent sized sensor that’s still small enough to carry around everywhere. The G9 X has a 1-inch sensor, a comparatively new type that’s four times larger than the 1/2.3-inch sensors in point-and-shoot cameras and more twice the size of the 1/1.7-inch sensors in older high-end compacts – including Canon’s own highly regarded PowerShot S120.

Remarkably, the G9 X is barely larger than the S120, itself considered in its time to be a brilliant bit of miniaturization.

There are other compact cameras with 1-inch sensors on the market, and Sony’s RX100 range is one of the most widely known – the latest version is the Sony RX100 Mark IV. There’s also Canon’s own G3 X, G7 X and G5 X – the same sensor is shared across all four models. However, it’s only really the G9X which is properly pocketable.

Sacrifices come with such extreme pocketability of course, and although the G9 X has impressive sensor and processor specs (20 million pixels coupled with a DIGIC 6 processor), there’s no viewfinder and no tilting or articulating screen.

The lens is also a bit of a trade-off too. While the G7 X has a 4x optical zoom which offers a focal length of 24-100mm (equivalent), with maximum apertures of f/1.8-f/2.8, the G9 X only offers a 3x zoom (28-84mm equivalent), and has a maximum aperture of f/2.0-f/4.9. While the wide end is still useful for creating shallow depth of field effects and in low light, it’s not quite as flexible as the G7 X’s lens at longer focal lengths.

On the plus side, the three-inch screen is touch sensitive, and there’s inbuilt Wi-Fi and NFC technology. As with the other cameras in the G range, there are manual and semi-automatic exposure modes, along with automated options, as well as the ability to shoot in raw format.

With a sleek and stylish chassis, the G9 X is reminiscent of the older and very popular Canon S120. You can easily fit it into a jeans or jacket pocket – it is noticeably slimmer than the PowerShot G7 X, as well as other one-inch type cameras, such as the Sony RX100 Mark III.

The front of the camera features a textured covering which looks pleasing but also helps to make it feel secure in your grip. The top of the camera has an mode dial to quickly switch between the various exposure modes, such as the manual and semi-automatic modes, as well as the automatic and creative options.

There are very few buttons on the body of the camera; instead, most operations are carried out via the rear touchscreen. If you’re not a fan of touch operation then this probably isn’t the camera for you.

There are just four buttons on the back of the camera, including a ‘Q’ button which accesses a quick menu for commonly used settings like white balance or metering, but it would perhaps be nice if you could customise the options. This Q button has a touchscreen counterpart which you can use instead if you prefer.

There’s direct access to certain settings on the screen itself, such as ISO (sensitivity), exposure compensation, aperture and/or shutter speed. A control ring around the lens can also be used to set certain parameters – you can choose which ones in the main menu or tap a setting on screen first and use the dial to make the adjustment. The autofocus point is set by a tap on the screen too.

There are no directional buttons on the camera and menu navigation and setting selection is done entirely by touch. This takes a little bit of getting used to at first if you’re used to a conventional camera. It feels a bit more natural in the age of the button-free smartphone, but working your way through eight pages of menu options without physical buttons can be laborious.

There is a button for starting up the Wi-Fi connection, but it’s on the side of the camera and easy to miss. After connecting to the network which the camera creates, you can launch the free Canon CameraWindow app (available for iOS and Android) on your smart device and both download shots you’ve taken and control the camera remotely.

Our hopes for the G9X were relatively high considering it has the same already proven sensor of the G7 X, coupled with a DIGIC 6 processor.

For the most part, those hopes have been justified, with beautifully saturated and vibrant images direct from the camera. The images have the warmth and depth of colour which we have come to expect from Canon cameras.

Colours are vibrant and well saturated in JPEG images taken directly from the camera. Click here for a full size version.

You need to switch on the G9X’s macro mode if you’re shooting something close-up. Click here for a full size version.

You need to switch on the G9X’s macro mode if you’re shooting something close-up. Click here for a full size version.

At 28mm, the widest point of the G9X’s lens isn’t quite as wide as the G7 X (24mm), but it still gives you good scope for landscape shots. Click here for a full size version.

You can use Canon’s “Creative Shot” to add filters and random crops to your images, an example of which is shown here. You don’t get a say over which filters and crops are chosen though. Click here for a full size version.

Having the larger sensor (than most compact cameras) and a wide maximum aperture also allows you to create some beautiful shallow depth of field effects, as well as keeping sensitivity (ISO) down in low light shooting conditions.

Images taken at the lower end of the sensitivity scale (ISO 100-400) display a fantastic amount of detail, giving a great impression at A3 and below. If you zoom in to 100% it’s possible to see a little loss of detail in some finer areas, but nothing more than we would expect from a sensor of this size and kind.

As you move up the sensitivity scale, detail is still maintained well across the frame, but it’s a little more painterly, or smudgy, in some areas of the image from around ISO 1600. That said, sensitivities up to around ISO 6400 are more than usable, especially if you intend to print or share at A4 size or smaller.

At the time of writing it was not possible to open the G9 X raw files with Adobe Camera Raw, but you can download Canon’s own Digital Photo Professional software to work with the files until an update is released. Checking the raw files shows that Canon’s own processing applies a fair amount of noise reduction to JPEG images shot at high sensitivities, getting rid of the majority of chroma noise though the cost of a little image smoothing.

For the most part, Canon’s evaluative metering system does a good job, producing accurate exposures. There are times though, if you’re shooting something of particularly high contrast underneath the active AF point, that you may need to dial in some exposure compensation or switch to spot metering.

Focus is swift and accurate, particularly when shooting in good light. In lower light conditions, the camera will on occasion hunt around before locking onto a subject, activating its Focus Assist light to help. It is rare for the camera to display a false positive acquisition of focus.

In our testing of the G7 X we found that images taken at the widest point of the lens suffered a little from coma distortion in the corners of the frame when looking at them at 100% (this effect makes dots appear as commas). There doesn’t seem to be the same problem with the G9 X, although it is worth bearing in mind that it’s a different lens. Images appear sharp both at the widest point of the lens and at the telephoto end of the lens, and at focal lengths in between.

The supreme pocketability of the G9X sets it apart from other 1-inch sensor compact cameras on the market. The small body doesn’t appear to affect image quality and the G9 X produces vibrant and well saturated pictures.

Being so reliant on a touchscreen to control the camera will appeal to some but not to others. It works well for most things, but when you’re navigating menus it’s almost as if the menu has been designed for buttons which aren’t there.

There’s plenty to like about the G9 X, and those looking for a really small camera that’s also good will be pleased. The G7 X and the Sony RX100 IV are also small, but the G9 X takes it a step further.

But there are sacrifices. The lens isn’t as long as some of the others on the market, and the maximum aperture isn’t as wide. It’s still pretty flexible for the majority of shooting conditions, but there will likely be times you wish you had something a bit longer to capture subjects just out of reach.

Although the G9 X technically sits below the G7 X in Canon’s line-up of premium compact cameras, for the moment, its price doesn’t reflecte that. If you have the budget for a G9 X, you also have the budget for a G7 X, which offers a better lens, tilting screen and more physical buttons. But if your main concern is how snugly a camera slips into your pocket, the G9X is an excellent choice.