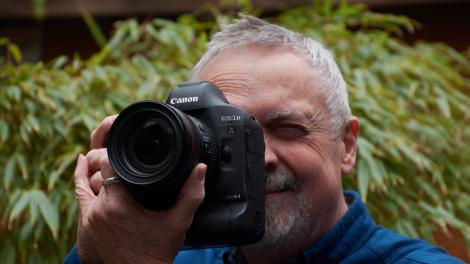 The wait is over, and Canon has unveiled its brand new flagship pro sports, action and press camera, the EOS-1D X Mark II. Keen Canon watchers have long suspected a new top-of-the-ranks model was in the wings, but it’s only now that the specifications have become official. Even better, Canon invited us to a special one-on-one session to see the camera ahead of the official announcement.

The EOS-1D X Mark II is a replacement not just for the original 1D X, but the EOS-1D C pro video camera too. In some areas it reads like a modest upgrade of the tech in the 1D X, but in others it breaks while new ground.

Canon says the new camera’s been developed following feedback from existing 1D X users, and what may sound like minor changes to the controls and layout can be a big deal for professionals who use these cameras day in, day out. We were able to try out the 1D X and 1D X Mark II side by side, and they are so similar it would be easy to get them confused, especially with the camera held to your eye.

But the big news stories are the Mark II’s amazing continuous shooting mode, its improved autofocus system and its 4K video capability. Canon set out to deliver “the ultimate combination of image quality, resolution and speed” in a camera designed to give photographers a “competitive edge”. That edge is all-important for pro sports photographers, where a small percentage improvement in their hit-rate for saleable shots can make a big difference.

The EOS-1D X Mark II has a brand new sensor, but it offers only a modest 2-megapixel increase in resolution over the old one. At 20.2 million pixels, it’s a long way short of the 50 million pixels of the EOS 5DS, but this is a different kind of camera aimed at a different market. The EOS-1D X Mark II is designed for high-speed shooting and low-light performance, and you can only achieve this with more ‘modest’ pixel counts. A 20-megaxpixel camera is more than enough for most pros (and amateurs) needs, and Canon realise this with the 1D X Mark II.

Many sports take place in less than perfect lighting, and Canon’s new sensor has an important innovation. The A/D converter circuitry, which translates captured light values into digital data, has now been integrated with the sensor itself. This shortens the signal path and reduces image noise – not just at higher ISOs but also further down the ISO range. This extends from ISO 100-51,200, which is the same as the previous model, but with expansion settings from ISO 50-409,600 – the highest setting is one stop higher than the old 1D X.

We were shown early versions of the camera so we weren’t able to take any photos away with us, but it’s going to be interesting to see if there are any obvious differences in image quality when we get a full review sample.

The on-chip A/D conversion is not the only change. The new sensor also incorporates Canon’s Dual Pixel CMOS AF technology for the first time in a full frame Canon. This uses phase-detection autofocus techniques to provide faster focusing in live view mode, which is especially relevant for movies.

The 1D X Mark II has upgraded processing power too, featuring dual DIGIC 6+ processors for high-speed processing – and it needs it, given its amazing continuous shooting capabilities.

The EOS-1D X was designed for flat-out speed, and the Mark II takes it a whole step further, with a continuous shooting speed of 14 frames per second with full auto exposure and autofocus tracking. That’s an amazing feat when you consider the mass and complexity of a full frame camera’s mirror and shutter mechanisms.

In fact it’s been made possible by a ‘refined’ mirror construction and drive mechanism which ditches traditional springs in favour of a cam system. This gives much more control over the movement of the mechanical parts at high speeds and helps control mirror vibration and noise.

In side by side use, it’s pretty hard to tell the 1D X II from its predecessor – both clatter through frames at an amazing rate at maximum speed. The extra 2fps of the Mark II, though, will be a big selling point for sports photographers looking to get a competitive edge over their rivals.

Canon’s also designed a new sensor cleaning system to cope with these high frame rates, which apparently can cause static buildup which, in turn, attracts dust.

It doesn’t stop there. The EOS-1D X II can go faster still in live view mode, where the mirror stays locked up, hitting 16 frames per second. Both these speeds are 2fps faster than the EOS-1D X could achieve, and at this level that’s a substantial gain.

High-speed shooting is of limited value if the camera’s buffer capacity can’t keep up. The old 1D X could shoot 180 jPEGs or 38 RAW files before the buffer filled up, but the Mark II is in another league, capturing unlimited JPEGs in a burst and up to 170 Raw files. That’s hugely significant for sports photographers who need to capture long continuous bursts and have the added quality of RAW files too.

To put a burst of 170 images at 14fps in perspective, this is continuously shooting for just over 12 seconds – that’s long enough to capture an Olympic 100-metre sprint race from start to finish! In Raw image quality mode!

This continuous shooting speed and buffer depth relies on the latest CFast 2.0 memory cards. The 1D X II has one CFast memory card slot and one regular CompactFlash slot. This gives photographers the benefit of the latest memory card technology and compatibility with their existing memory card collections. Interestingly, you’ll also need a healthy battery! Canon told us you won’t get the top shooting speeds if the battery level drops below 50%.

It’s all very well having super-fast continuous shooting speeds, but you’ll need an autofocus system that can keep up. At first sight, the AF system in the Mark II looks the same as the 61-point AF system in its predecessor, with 41 cross-type sensors and 5 dual cross-type.

But Canon has made lots of changes under the hood, with an expanded AF area and a new AI Servo AF III+ system which improves the tracking sensitivity for subjects moving erratically. Canon’s latest adaptive 3D tracking system adjusts to your movements as well as the subjects, such as when you swivel to follow a subject moving past you, for example.

The autofocus tracking is aided by the 1D X Mark II’s new 360,000-pixel RGB+IR metering sensor, which provides improved subject detection – an interesting example of how metering and focusing work closely together in the latest cameras.

One further improvement will be big news for photographers who routinely use long telephoto lenses with teleconverters – all 61 AF points now work at f/8.

The EOS-1D X Mark II can shoot stills faster, for longer, than ever before, but it also introduces another major new feature – 4K video.

This has been around on mirrorless cameras for a little while, but it’s the first time it’s appeared on a stills-orientated Canon DSLR. This is a camera with appeal for two target audiences – it’s also one which will appeal to the growing number of pro photographers now being commissioned to shoot video footage as well as stills.

The even bigger story is that the 1D X Mark II doesn’t just shoot 4K at 30fps, it can shoot it at 60fps too. That requires serious processing power and it means you can record smooth 2x slow motion footage at 4K resolution.

Interestingly, the Mark II shoots ‘real’ 4 at 4,096 x 2,160 pixels, rather than the slightly smaller UHD format most other cameras refer to generically as ‘4K’. The one possible complication is that this 4K video is slightly wider than the standard 16:9 ratio used by UHD, full HD and standard HD – it’s actually closer to a 17:9 ratio.

Another anomaly is that the 1D X II can’t save 4K to an external recorder via HDMI – it’s restricted to 1920 x 1080. 4K can only be recorded internally.

Canon has chosen the Motion JPEG format for video capture because this stores a full image for each frame of data and allows the extraction of 8.8-megapixel stills. It means photographers can capture good-quality still images at 60 frames a second, albeit not at the sensor’s full 20-megapixel resolution. Grabbing stills from video is being taken much more seriously with the advent of 4K.

And the 1D X Mark II takes another step forward relative to its predecessor with the addition of a headphone socket. Sound is a major part of any video production, and it’s important to be able to monitor the sound the camera is recording as you film in case you need to reshoot – if you only find out there’s a sound problem later, it’s too late to do anything about it.

Despite all the changes to the technology inside the camera, on the outside it looks very much like the old model. Professional photographers need to learn their cameras inside out, so the closer the new camera is to the old one, the better.

There are a few changes, though. Round the back, there’s a new 3.2-inch 1,620k-dot touchscreen display with a new menu font for better on-screen aliasing (smoothing). The touchscreen is only for when you’re shooting in Live View, not for tapping the screen to adjust settings – which makes sense to us as the menu tabs and options are smaller on screen than most fingers, so it’s quicker to use the dials and buttons as usual to change settings. The surface of the small ‘thumb-stick’ controller has been modified to make it easier to grip.

On the top of the camera, a new bulge in the pentaprism houses the camera’s new built-in GPS receiver – a popular feature with picture agencies, apparently, because it allows the auto-captioning of photos.

Round the front, the vertical grip has been improved and the dividing ridge between the function buttons next to the lens have been removed to make them easier to find with your fingertips.

On the side of the camera is a rubber flap, and underneath you’ll find the 1D X II’s wired ethernet socket, HDMI port and USB 3.0 port – the original 1D X uses a slower USB 2.0 interface.

Otherwise, the EOS-1D X feels almost identical to the 1D X. Both cameras are heavy and solid-feeling, with the characteristic ‘battery bulge’ in the base doubling up as a vertical grip for portrait format shooting. This has been revised for the Mark II with a deeper grip for a more secure hold.

We knew the EOS-1D X II was coming but the full specifications were still shrouded in mystery right up until the end. And now it’s here it’s clear that Canon has put a lot of thought into this new camera – and a lot of powerful technology and bold features.

Professional photographers are pretty conservative. They don’t like change for change’s sake, and Canon has been careful to keep the overall handling experience as consistent as possible with previous professional EOS cameras.

But Canon has massively boosted the two key features for pro sports and press photographers – the continuous shooting speed and buffer capacity, and the addition of 4K video at frame rates up to a truly impressive 60fps.

The sensor gets a modest resolution upgrade, from 18Mp to 20Mp, but the real work here has gone on behind the scenes, with the new on-chip A/D converter design and Dual Pixel CMOS AF technology for faster, smoother live view autofocus.

The EOS-1D X II was never going to challenge the mighty EOS 5DS for resolution – it’s not that sort of camera. But what Canon has built is a camera with blistering speed and immensely powerful video capabilities that will bring a grin to the face of every pro Canon shooter.