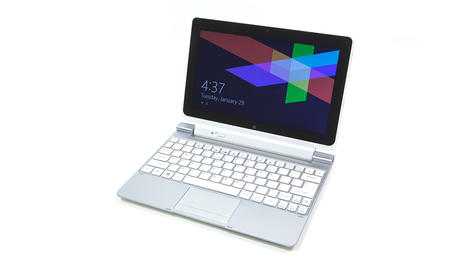 Don’t let the Acer Iconia W510 and its hearty hinge confuse you. It’s a tablet, not one of those convertible laptops you’ve been seeing lately. It may transform into three different modes, but it’s a Windows 8 slate with a keyboard dock, pure and simple.

Why? Because its 10.2-inch form factor and low-wattage Atom processor make it less than functional for all but the most basic computing tasks. Despite running the full version of Windows 8, it has more in common with the Microsoft Surface RT than a true convertible like Lenovo Thinkpad Helix. 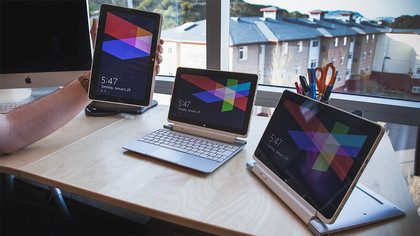 Our configuration of the Acer Iconia W510 packs a 1.8GHz Intel Atom processor, 2GB of RAM, and a 64GB SSD. It retails for $750, half of what true transformers like the HP Envy X2 go for, but don’t mistake the W510 for a value. This is iPad pricing without iPad performance, and for just a $100 more, you could get a more functional, albeit heavier, Windows 8 laptop. Or you could get a sleek Surface RT, preloaded with Microsoft Office.

Though the thought of a full Windows 8 slate, keyboard stand included, might be tempting, the Acer Iconia W510 is not suited to be to the solo computing option for anyone but the lightest of users. It’s meant to be someone’s second or even third device. Portability and battery life are its only true selling points, but its that unfortunate device that’s easy enough to haul, but barely functional enough to justify its presence in your bag.

As we said, the Acer Iconia W510 is not a laptop or ultrabook, it’s a tablet. You can even buy it sans keyboard stand for $500. We wouldn’t want to though, since the stand provides extra battery life and the machine’s only full size USB port. 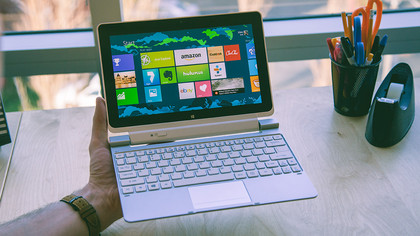 On the tablet itself there’s mini-HDMI and USB, a microSD port, headphone jack, volume rocker and charging port, so it really can fly solo without the keyboard dock.

The overall design of the Iconia W510 is defined by one thing: size. At just 10.2-inches and weighing less than two pounds, it’s tiny, cute even. While this is an excellent form factor for a tablet, when you drop the W510 into its dock and start to type, you’ll feel its limitation immediately. 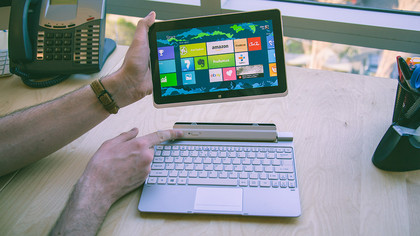 In ultrabook-esque productivity mode, we found the W510’s keyboard annoying and cramped to type on. 11-inches is as small as you can go and still fit a standard laptop keyboard on your machine. Since Acer went below that form factor, some sacrifices have been made. Keys are small, shallow and the touchpad is tiny too.

Banging away on this very review, we often missed keys and always felt as though we were hunched over the thing. Overall, we found the keyboard adequate for email, but not something we’d want to do any real word processing on. Just fifteen minutes or so of composing on the Iconia W510 had us dying to get back to our Lenovo IdeaPad Yoga or MacBook Pro, anything with a full, more functional keyboard. 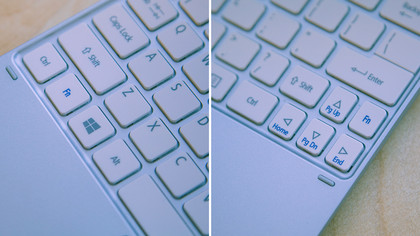 The touchpad is torturous. It’s tiny and sensitive like a gnome with emotional issues. Mousing around, the arrow tended to flit all about the screen any time we applied our pointer finger with anything less than extreme precision. Unless you plan to stick with touching the screen, a wireless travel mouse is a must for the W510. Make sure its bluetooth or you’ll be giving up your only USB port to a wireless dongle.

The touchpad is not also not multi-touch capable. This means no dragging two fingers to scroll a web page or slide the Start Screen. This is a corner that really shouldn’t have been cut, since the shrunken keyboard makes Home, End, Page Up and Page Down keys into function keys. Make sure your travel mouse has a scroll wheel. 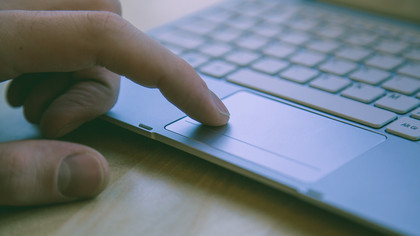 Finally, the whole thing is unbalanced. Though the hinge is sturdy and keeps the screen in whatever position you choose, the thing tends to fall overt backwards at anything other than a ninety degree angle. The tablet/screen houses all the internals, outweighing the dock, giving it a tendency to fall over backwards when placed on anything other than a flat desktop. That’s a mighty flaw for a travel-oriented machine.

The Acer Iconia W510 has Intel inside, but not a chip we’ve seen in awhile. It runs on the Atom processor, which was introduced a few years ago with the first wave of netbooks. This is, of course, an updated version, but at just 1.8 GHz dual-core, it’s not terribly modern.

The Atom is supported by 2GB of RAM and you’ve got 64GB of SSD to fill up, minus the space taken up by Windows 8 and few Acer applications.

This low-energy processor does wonders for the Iconia W510’s battery life, but it makes for inconsistent performance, especially when multitasking. Browsing in either Internet Explorer or Google Chrome was a pleasant experience when it was the only thing we were doing. With three or more programs active at once, websites loaded in a herky jerky fashion. Sometimes a page displayed quickly, but the machine would take a few seconds before we could scroll or click a link. 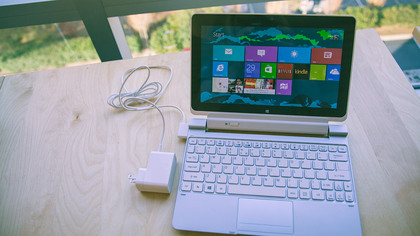 The Iconia W510 handled games like Angry Birds: Star Wars and Where’s My Water just fine, but the machine’s specs limit you tablet titles. Real PC gaming is basically out of the question. We were able to get playable framerates in the eight year old Half-Life 2, but anything more modern than that, such as Far Cry 2, proved too much for it to handle. The W510 is capable of basic Photoshop use, but forget about doing any sort of HD rendering.

However, that power-sipping processor does have one massive benefit: great battery life. Acer’s estimation is 18 hours when using the dock, and we generally got numbers just slightly south of that. The W510 consistently pulled 16 hour days, with use ranging from word processing, email, web browsing and some Netflix and YouTube streaming. 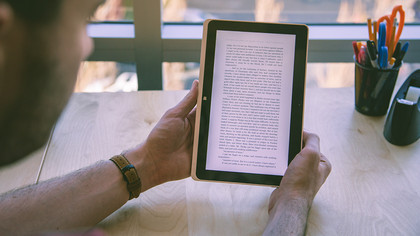 Using just the tablet still results in very respectable battery performance. We averaged 8 hours when going dockless. The W510 might be unpowered, but it’s certainly not unreliable. 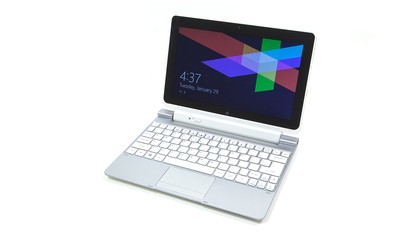 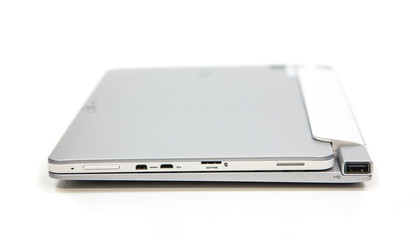 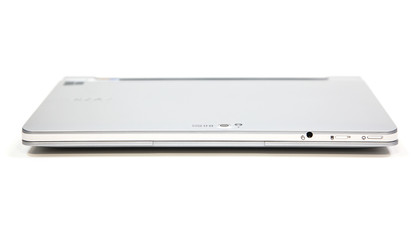 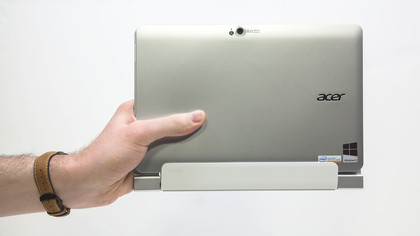 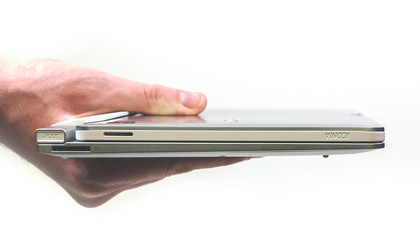 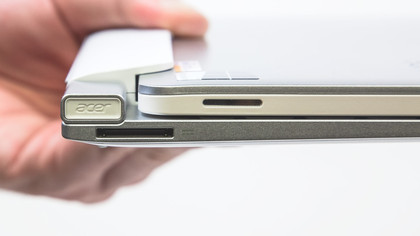 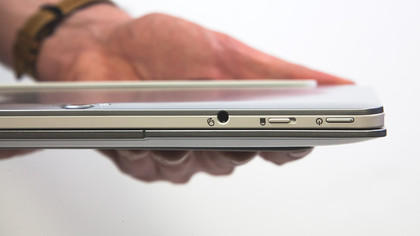 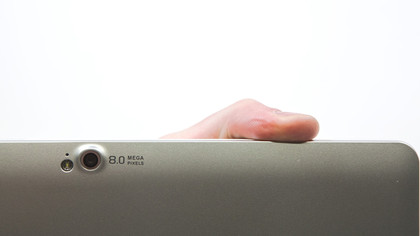 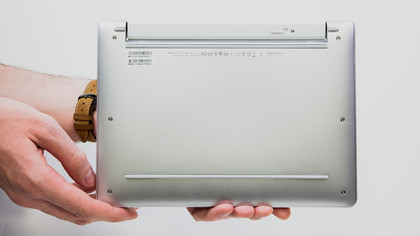 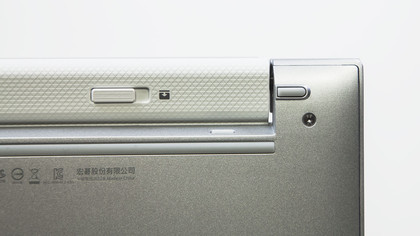 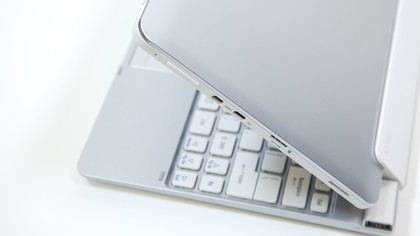 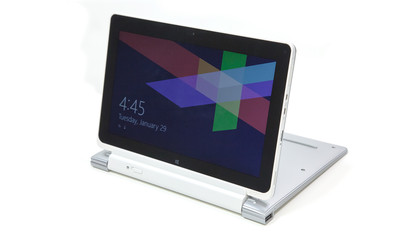 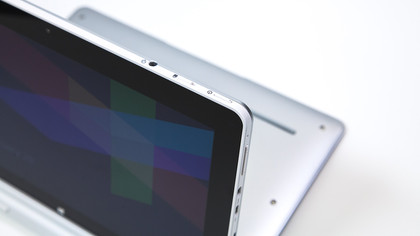 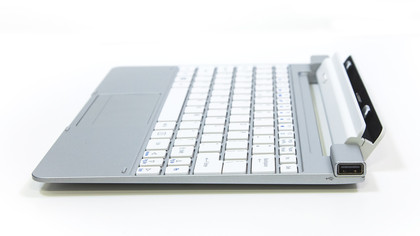 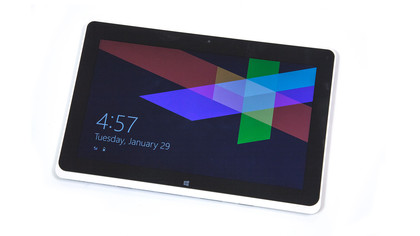 With Windows 8 going all touchy-feely, the PC space is starting to get a tad schizophrenic. Touchscreen laptops are common, as are ultrabooks that want to be tablets, and now we’ve even got portable all-in-ones like the Acer W700. Full Windows 8 or not, the Acer W510 is a tablet, though it wishes it were a convertible ultrabook. 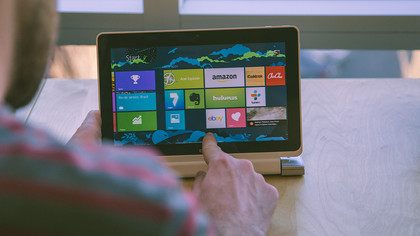 In trying to be everything to everyone, it embraces the tired old "Jack of all trades, master of none" cliche. While we loved the portability it offered, we’d rather sacrifice our shoulders and haul a heftier notebook with a full keyboard. Ten inches is great for a tablet, but for as a laptop replacement it just doesn’t get the job done, and there’s not enough pep in its processor to justify a $750 price tag. Additionally, the lack of a 3G/4G option prevents the W510 from being a true road warrior.

The Iconia W510 is so very portable. At 10.2-inches and weighing less than two pounds, it fits easily in a bag or large purse, and you’ll likely forget you’re even carrying it.

The tablet itself gets excellent battery life, and when coupled with the dock it gets even better. The W510 can easily make it through the day on a single charge. 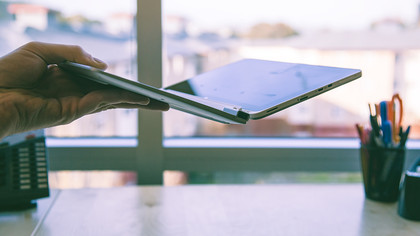 Like any tablet, it’s a great media consumption device. It performed perfectly when streaming web videos and watching Netflix.

It’s also a nicely built piece of machinery. The hinge is sturdy, the silver brushed metal exterior looks and feels good, and it looks more like a laptop than other more cobbled together looking tablet and dock setups.

The keyboard. We hated it. Typing anything more than a paragraph or two was tortuous, and the touchpad is a real stinker too. It’s tiny, very sensitive and not multi-touch. That means no two finger scrolling, a feature we’ve come to expect on laptops, even if they have a touchscreen.

The processor is also not peppy enough for the W510’s price point. What’s the point of paying for a full Windows 8 machine if it can hardly run any Windows programs? 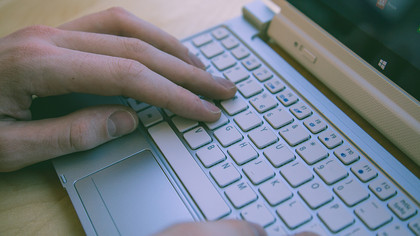 While the hinge is very sturdy and keeps the screen nicely in place, it’s a top heavy design. It tends to fall over backwards when used on a lap or couch cushion. That’s rather precarious for something obviously built to travel.

There also aren’t enough ports on the thing. One full size USB port is tough to swallow, especially since you’ll like use it up with a wireless mouse to compensate for the W510 miserable touchpad.

Finally, the price. The W510 is too expensive for the limited functionality it offers.

Do not purchase the Acer W510 to be your solo computing option. The compatibility of full Windows 8 is tempting, but the internals aren’t powerful enough to support the most relevant software. The real deal breaker, however, is how cramped the overall build of the thing is. Let us reiterate that this is meant to be someone’s second or even third device, something good for media consumption and light work or gaming when on the go.

We’re obviously not crazy about this machine, but there is one customer we’d recommend the Acer Iconia W510 to. That’d be someone looking to upgrade from a dated tablet who often types on a third-party keyboard. If you’re using an iPad 2 with a ugly keyboard stand, and like the idea of getting a decent Windows 8 tablet bundled with typing dock that provides extra battery, then we would recommend you check out this machine. Go into a store and try typing on it, and make sure the keyboard suits your needs, because it didn’t suit ours.

Really though, there are better ways to spend your money. For less cash you could pick up a Nexus 7 or Nexus 10, or even a brand new iPad, and pair it with a bluetooth keyboard.

If it’s the promise of portability and productivity that intrigues you, spend just a little more money and get a real ultrabook, an 11-incher with real keyboard. Your fingers will thank you. Or just get a full-on laptop. You shoulder may hate you after hauling it all day, but you’ll be getting a lot more computing power for money.

Finally, if it’s a real convertible you’re after, you’re just going to have to pony up. Investigate the The HP Envy X2, the Thinkpad Helix or the Surface RT, or wait for the soon-to-debut Surface Pro.

We’re not big fans of Windows RT, so we can’t believe we’re saying this, but the W510 might have been better off as an RT device. Mainly for the Microsoft Office apps that are included with RT. Remember, Windows 8 doesn’t come bundled with Word or Excel, so you’ll be dropping even more cash to get your W510 functional. We say no thanks.