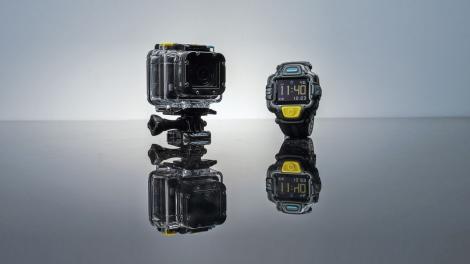 Fast frame rates and 4K video are the big hit features for action cameras, enabling you to capture high-quality footage. However, once the action has been captured that footage still needs to be edited and uploaded, and this process usually takes place some time after the event. That’s set to change with the arrival of the 4GEE Action Camera, which features the same tough build and latest video technology, but incorporates a 4G network connection that enables you to broadcast live video as the action is happening.

Sporting a box-style design similar to the GoPro Hero4 and Veho Muvi K2, the 4GEE features a waterproof housing to protect the camera from the elements; the housing uses the familiar lever lock system to access the camera.

On top of the housing is a window through which you can see the camera’s small LCD, which displays shooting modes and other settings. On either side of this screen is a start/stop record button and a power/menu button. This simplifies the three-button setup that usually appears on box-style cameras, and it makes navigating the menus and selecting options quick and easy.

The case also features two mount slots, one on the base and the other on the back, which enable you to connect the GoPro Mount adapter. The adapter features a ready to go strap loop, so straps can be quickly added and used to connect the camera to your chosen support.

The camera can be easily used with any of the existing GoPro accessories. Out of its housing, the camera is a similar width and height to the GoPro, but it’s twice the depth, and weighs in at 128g compared with the Hero 4’s 75g.

On one side of the camera are the USB and MicroSD card slot – there’s no direct HDMI connection. A slide cover on the back gives access to the battery, under which is a slot for the SIM card – a contract is required in order to use the 4G live streaming feature, and you can add the data contract to an existing EE contract, or pay as you go.

As well as the camera the kit also includes the Viewfinder watch, which enables you to start and stop recording, take photos and watch a live video stream direct from the camera; you can also use it as a regular watch.

The option to position the mount adapter on either the base or the back of the camera makes the 4GEE extremely easy to mount. However the extra depth does make it a little more cumbersome that the sleeker GoPro Hero, especially when it’s chest mounted.

The extra bulk also means that attaching the 4GEE to a bike or vehicle requires a little extra care in order to avoid vibration or wobble, although again you have plenty of flexibility when it comes to positioning the camera. The additional depth does hinder mounting directly to a standard cycling helmet, but if you’re attaching it directly to a bike or vehicle this isn’t much of an issue.

Setting up the camera is quick and easy, and the interface is intuitive to use: switch on, press the power button to scroll through the modes, and the yellow button to start recording.

The 4GEE can be used on its own, but the easiest way to adjust video settings is via the 4GEE Action Camera app. Once loaded you have quick access to all settings, including video resolution from 1080p at 30fps to 480p at 120fps.

Pairing the camera with phone is straightforward. On the camera simply select Pairing, then select the phone icon on the camera’s LCD and the camera is primed. Switch to your phone and locate the camera in your mobile device Wi-Fi options, select it and the two are paired. Connecting the camera to the Live View watch is equally simple.

Once the mobile pairing is done, you can boot the separate kkeegle app in order to set up the live streaming functions. Again this is relatively straightforward, and it only needs to be done once.

The app enables you to set up a direct stream from the camera over the 4G network, and invite people to view it. After this initial setup, every time you switch the camera to the live stream setting anyone in your group of contacts in the skeegle circle will be sent an email with a link to watch the stream.

The whole process is quick and simple, and once it’s done you’ll be able to go out riding or surfing and broadcast the events live without the need to take your mobile phone.

The 4GEE’s small lens produces the typical action camera look, with fish-eye distortion and crisp contrast. The footage itself is well saturated, with bright vibrant colours.

Dynamic range is good, with plenty of detail in shadows and highlights, and the auto exposure works well as you move from bright conditions to shade. Where the camera really excels is in the rendering of highlights – it manages to retain detail in bright clouds where other cameras would struggle.

Comparing the auto exposure adjustment against other cameras, the 4GEE copes just as well as both the GoPro Hero4 and Muvi K2. In lower light conditions it is possible to see that the sensor struggles, with colours becoming subdued and noise becoming evident, but this is pretty standard for this size of camera, and for action cameras as a whole.

The 4GEE’s video looks fine direct from camera, with good colours and sharpness. However detail within the footage is lost, especially in scenes such as grassy fields, which simply become a sea of green without detail. Large areas of single colour will also lose definition, and this is especially apparent when compared with the more subdued footage of the Muvi K2 and Hero4.

The big feature is the live view streaming, and when this mode is selected the resolution drops down to 720p at 30fps, although this is still a decent resolution, and more than adequate for playback on most mobile devices.

The quality and delay of the stream varies depending on the quality of the signal strength, but under full 4G the quality is surprisingly good. If the signal drops to 3G then the footage does become pixelated, as you’d expect, but it’s still just about viewable.

The live view watch is a nice addition in theory but the quality of streaming through the watch is low, especially when compared with the Sony AS100V. The watch is also short on features, and feels more like a gimmick than a useful accessory for the camera.

Image quality falls down when the frame is filled with grass or other areas of mostly flat colour.

Dynamic range is good – there’s plenty of detail visible in these bright clouds.

The camera performs best in urban settings with plenty of contrast and detail.

The facility to broadcast live footage is a novel feature in action cams, and something that will appeal to many. Where this camera really excels is in its ability to make the action camera format truly accessible to the mass market. Both the camera and the app are easy to use for novices, and the monthly contract option will make the 4GEE attractive to those who can’t afford to buy an decent action camera outright.

Throwing loads of extras into the bundle might make it feel like you’re getting value for money, but the live view watch leaves much to be desired. The quality of the stream is overly pixelated and slow, which is a shame when so much thought has been put into the rest of the product. Video quality is variable from the camera, and while footage shot in urban environments looks good, footage of fields or other expanses of similar colour lack definition.

The 4GEE Action Cam brings an exciting new angle to the wearable camera market with the ability to broadcast live via the 4G network and the skeegle app. The camera, live view watch and app make up a nice package, and initial setup, connection and use are straightforward, making it a good option for the non-tech savvy.

Its size and weight does make it one of the larger action cameras on the market, but the use of the GoPro-style mount and the ability to change the position of the mount gives it an edge over the likes of the Veho K2 and Toshiba Camileo X-sports in terms of flexibility – the camera can be attached to almost anything. Video quality ranges from good to mediocre, and while the resolution and frame rate options are rather limited, they’ll suit the needs of most users.

At the £299 upfront price you’d expect something to rival the features and quality of the TomTom Bandit or GoPro Hero4, but the 4GEE comes nowhere close. On contract at £10 a month the 4GEE becomes more appealing, packaging the action camera experience in a fun kit, albeit one that will appeal to families rather than to serious extreme sports enthusiasts.