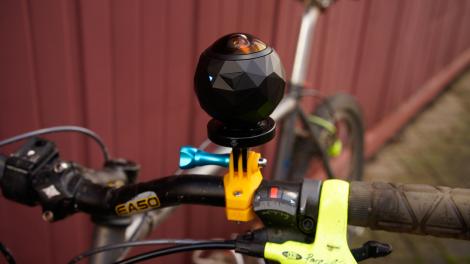 The 360fly is like no other action camera on the market. The popular box or bullet shape and design that is so common has no part in the 360 Fly’s DNA; instead the exterior is formed by a series of geometric patterns that makeup the striking spherical shape.

The textured exterior has a hard wearing black finish that is topped by the large 360 degree lens. There’s no cover or housing for the camera so this lens is open to the elements, and although you might worry that the lens’s direct exposure to mud, grit and water would be a sure fire way to quickly destroy it, we found that during our test it stood up to all conditions well, even when soaked and caked with mud.

The large lens is the unmissable feature topping the camera. It features eight elements with an aperture of f/2.5, a field of view of 240 degrees, a 0.88mm focal length and a minimum focus distance of 30cm.

Below the lens on the side of the spherical body is a small on/off push button that uses the same geometric design as the body – the rest of the body is pretty much clear of any other features except for a small microphone hole. On the base are contacts for charging and the mount socket.

This sealed design means that there is no need for an additional housing and the camera is water resistant up to 5 atm, or 50m – although a small rubber plug does need to be inserted into the microphone hole. This means that the 360fly is perfectly suitable for attaching to a surfboard or shooting underwater for short periods, but deep sea diving would be pushing the camera’s waterproofing ability.

Directly in the center of the base and surrounded by the contacts is the camera’s mount. This is a proprietary socket design and special mounts can quickly be clicked in. The design holds the camera incredibly well and although it’s easy enough to quickly release it on purpose it’s unlikely that it will knock free accidentally.

Other than the lens, button and contacts there are no other features on the exterior and the whole unit is sealed. There’s no interchangeable battery, memory card slot or USB port, and data transfer and charging both require a small dock.

The dock is nice and small and uses a USB cable to connect to a computer so you can download video files or charge the device through USB. The dock is very simple with a USB socket on the side for the cable and a ring of small contacts on top. These contacts match those on the base of the 360fly. Just pop the camera on the dock and it’s ready to charge. If you need to transfer files to your computer then the dock can be used to make the connection – just switch the 360fly on, attach to the dock and the camera will appear on the computer like a regular external drive or action camera.

As there are no controls on the camera, all settings and recording options are controlled through the app. This is available for iOS and Android devices and requires a bluetooth connection. Once connected it enables a live view stream. Unlike normal video streams that are static in their composition, with the 360fly you’re able to look around the scene. You can do this by moving the phone around or by using your finger on the screen to navigate and start the 360 video experience.

Build quality and finish is excellent and any worries about the lens being damaged easily are quickly dispelled, although a careful cleaning technique as highlighted on the 360fly website should be followed to ensure that the lens stays in excellent condition. The outer shell is solid and the geometric surface is a work of art.

Attaching the camera to a bike or helmet is easy enough and in the box there are a small selection of self adhesive mounts that can be stuck directly on to your object of choice. There’s also a GoPro mount adapter that enables you to use the camera with the vast array of existing GoPro Mounts. If used you do need to take into consideration that the 360fly is a larger and heavy camera than the GoPro, so any mount used needs to be a little more sturdy in order to avoid vibration and wobble when on the move.

The mount in the image here was designed for use with a 22mm diameter bar and printed with the Ultimaker 2 Go 3D Printer.

Getting started is easy enough – you just hold down the button on the camera for a few seconds and wait for the vibrations and blue light.

All operations for the camera are handled by the 360fly app. Once downloaded and paired through bluetooth to your phone, the app can be used to view the latest videos from the 360fly community, control the camera, adjust settings or view the footage you’ve shot.

Due to the nature of the 360 video there are no real adjustments to the video recording settings. Although this is the first device to enable this style of video captured all under one roof, it would have been good to have some flexibility over the white balance, sensitivity and frame rate settings. However, not being able to adjust these settings isn’t too much of a worry as the 360 video is the major feature.

Video can then be reviewed through the app by selecting the clip that you want to see and clicking. At this point the footage is displayed on your Phone. Due to the interactive nature of the video clips it’s best to download the clip to your mobile before watching them back. Once a clip is downloaded it can then be viewed, edited and shared directly from the mobile device, which is a really nice touch.

When it comes to sharing your footage with others the process is well thought out, enabling you to either share your exploits with the rest of the 360fly community or launch your 360 videos onto YouTube or FaceBook via a simple share button.

Video editing can also be carried out on the Desktop 360fly Director app. This is available for both Mac and PC and can be downloaded directly from the 360fly website. As with the app and camera the desktop application is just as well thought out and enables you to quickly edit your footage, add soundtracks and upload your movie to the community, YouTube or FaceBook.

Powering down the camera follows a similar procedure as powering on, so you just hold down the button and wait for the vibrations and the light to go out.

Video performance is limited to 360 capture and there is no ability to change this to a more familiar 16:9 HD etc format, but then this isn’t what this camera is about.

The 360 video capture is impressive and although the quality doesn’t match that of a standard GoPro camera the ability to move the footage in order to get a complete 360 degree view is impressive.

However, although the camera is called 360 this refers to the horizontal rotation, and obviously anything below the camera will not be captured. Vertically, the field of view is set to 240 degrees.

As the camera is designed with the lens pointing up, the sharpest part of the footage is directly above the camera – but the usual point of interest in the footage is around the edges of the frame, and this is considerably softer and lacks the detail captured in the centre. This is unavoidable due to the design. It will be interesting to see if cameras such as the Nikon KeyMission 360 will address this issue with the two-lens approach later in the year.

Sharpness and detail aside, the quality of tone and colour is good, although again not as crisp as that from the GoPro.

The big selling point for the 360fly is the 360 degree video, and on this front the camera performs exceptionally well. Playback of the footage through the mobile and desktop app is good and gives you an immersive experience that just isn’t possible with traditional single point of view video.

The 360Fly is unique in its approach and although it isn’t the only 360 degree camera on the market, the design and simplicity of use make it the only real 360 option at present for the extreme sports enthusiast.

The design and build are excellent and although it’s slightly larger and heavier than standard action cameras the solid mount design and inclusion of the GoPro mount adapter make the 360fly quick and easy to attach to almost any object or vehicle you could want.

At first, the fact that both the memory and battery are sealed within and can’t be swapped is worrying and is in stark contrast to every other decent action camera on the market. However, in practice the internal storage and power is enough to capture a good two hours of continual footage. This amount of time for most days is more than enough, especially when it comes to editing later.

The small dock design is well is thought through and although it does mean that you need to carry around the dock and cable it’s small and light enough not to worry about too much.

The 360fly is a well rounded first generation device, and the company has done incredibly well to make sure that everything is kept simple and works, rather than trying to add in additional features that over-complicate a new genre of video.

There is a lack of settings adjustments, with no ability to change the resolution in camera or video modes.

The small mic hole on the side that needs plugging if you’re using the camera in water is an issue, as over time that small plug is very likely to get lost or may even fail in use. If the 360fly didn’t have the 360 video ability then the quality of the footage would be an issue too, there’s a high level of softening at the edges of the frame and overall the video lacks detail and quality.

As with the DJI OSMO, the 360fly is an action camera with a difference, and one that enables you to capture your perspective of the world in a way that just isn’t possible with any other device at the price. The stylised geometric design makes the camera itself one of the best looking devices on the market. In use, the camera does exactly what it is designed to do and although the video quality isn’t anywhere near as good as the likes of the GoPro, the ability to look around a scene adds a dimension that definitely makes it worth owning. Compared to other 360 degree devices already on the market, the 360fly is by far the most complete and well designed all-in-one solution.