Back in 2006, Panasonic launched what it claimed to be the world’s smallest compact with a 10x optical zoom, the Lumix ZS1 / TZ1. This was arguably the camera that started the now-popular travel zoom compact category, and Panasonic has contributed consistently to it over the years with very well regarded models.

Last year it refreshed its ZS / TZ range with two new additions. The Lumix ZS60 (known as the TZ80 outside the US) blended a 1/2.3-inch sensor with a 24-720mm (equivalent) zoom lens, while the ZS100 / TZ100 defied expectations by partnering its 25-250mm (equivalent) lens with a significantly larger 1.0-inch sensor – a first for such a camera.

Now, the new Lumix ZS70 (known as the TZ90 outside the US) appears to update the former of those two models, without quite dethroning the latter as the flagship model in the series.

The ZS70 / TZ90 doesn’t stray too far from the ZS60 / TZ80 in its intentions, although it does boast a handful of key changes, the most significant of which is a tilting LCD screen that should please those who like to shoot selfies.

This immediately gives it a handful of competitors, such as the Sony Cyber-shot HX90V and Canon PowerShot SX710 HS, but with 4K video and the addition of a viewfinder the ZS70 / TZ90 retains plenty of appeal.

In place of the ZS60 / TZ80’s 18MP High Sensitivity MOS sensor, the Panasonic ZS70 / TZ90 arrives with a new 20.3MP sensor, which is designed with the same back-illuminated construction as before. This works with the camera’s Venus processor to deliver an ISO range of 80-3200, which is extendable to a setting equivalent to ISO6400 for when there’s no alternative.

You can capture raw images in addition to JPEGs, and full manual control over exposure is provided through the camera’s mode dial. 4K video recording to the UHD resolution of (3840 x 2160) is also present, as is the 4K PHOTO option that enables the extraction of 8MP images from captured footage.

The lens covers a 30x optical zoom range that’s equivalent to 24-720mm in 35mm terms, and is accompanied by five-axis Hybrid O.I.S. technology to help keep things stable at longer focal lengths and in low light.

The camera’s tilting screen still measures 3 inches, as on the TZ80, but it can now tilt around a full 180-degree angle to face the front. Its resolution of 1040k dots is pleasingly high, and the fact that it responds to touch makes setting the focus point and keying in certain settings simple.

This screen is accompanied by a variety of selfie-friendly functions, such as a 4K Selfie mode and the option to blur the background or keep it sharp with the Background Control option. For more distant self portraits you can also have the camera automatically take the image when you wave your hands across your face, while the Buddy Shutter option fires the shutter when two people bring their faces close together.

Just above the screen sits a 0.2-inch viewfinder, still something of a rarity at this level, with 1,166k dots and a magnification of 0.46x in 35mm terms. What’s particularly welcome to see is an eye sensor next to it, as this automatically lets the camera know when to switch between the two, as the user’s face approaches or moves away from it.

All images and videos are whisked away to SD, SDHC or SDXC cards, and you can transfer images wirelessly through the camera’s built in Wi-Fi too. NFC isn’t present, however, and nor is GPS. You can, however, charge the camera via its USB port, which is convenient when travelling.

Panasonic has opted to drop the more defined texture of the ZS60 / TZ80’s grip and swap it for something that’s easier on the eye and nicer to touch. The grip itself, however, doesn’t appear to be sculpted in a logical way to support the user’s hand.

Unlike the Canon PowerShot SX730 HS, for example, on which the grip follows the natural curvature of the middle finger when the camera is held conventionally, the grip here does not. A slight indent to its side does make things a little more comfortable, but it’s still far from ideal.

The control ring that encircles the base of the lens only protrudes from the front plate by around a centimeter, which some may find shallow. Nevertheless, this helps to keep the profile down, and its ridged finish means it remains tactile. It turns very smoothly, and can be used to regulate aperture, zoom and other settings, although the menu pad dial on the back of the camera provides an arguably more convenient way to operate some of these functions.

You can also use the dial to scroll through images and zip through menus, among other things. This dial travels well, although its looseness is little less convenient when its up, down, left and right sides are pressed, as it can slip a little. Like the buttons around it it responds with a certain hollowness when pressed, but this is fairly typical on such a camera. 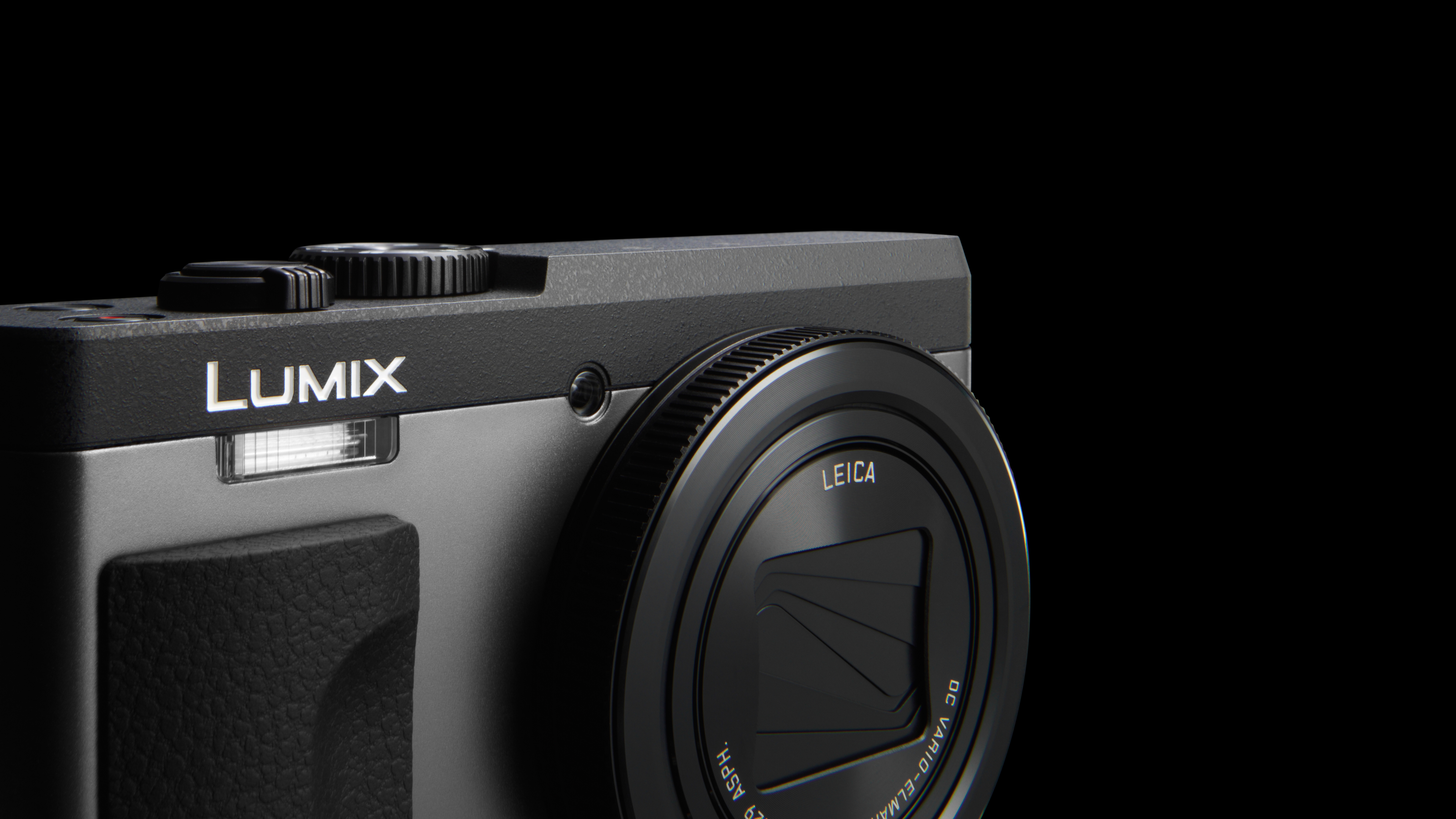 The LCD screen moves easily enough when pulled away from the camera’s body, but it stays in place when adjusted. The fact that you can grab the screen at any point along its base also makes this action far more convenient than on some other cameras, where you may only have a small groove in which to slip your thumb.

While the ZS70 / TZ90 doesn’t appear to offer the same blisteringly fast focusing speeds as its compact system cousins, focusing speeds are speedy enough for most situations, particularly when capturing static subjects.

In good light the 49-area option brings subjects into focus quickly enough, and while these speeds drop a little in moderate lighting they’re still perfectly respectable. If you define the focusing point in advance and light levels are good, however, focusing speeds are typically stronger.

As is common to Panasonic models the LCD screen is very responsive to touch, which makes this a convenient way of setting the focusing point with the finger, although on such a small body it’s easy to accidentally brush against it and inadvertently focus elsewhere.

The camera’s AF tracking system generally adheres very well to subjects as they move around the scene, and when you combine this with the camera’s continuous AF system it’s possible to get subjects moving at a moderate pace in focus with little hassle. It can lose the subject at times, but this is true of many similar systems.

The Lumix ZS60 / TZ80 takes just over a second or so to fully come to life, which is pretty much in line with expectations for such a model when you consider its zoom. You can also turn the camera on to view images without extending the lens by pressing the play button, although the delay here is considerable (and is also the case when turning the camera on and immediately pressing the play button).

The camera appears to use the same 0.20-inch viewfinder as the ZS60 / TZ80, which presents details with 1.166k dots. In such a small camera we can only reasonably expect so much, and it’s worth remembering that many rival models do not offer a viewfinder at all. Still, it’s at nowhere near the level of those inside the company’s compact system cameras.

With a magnification equivalent to 0.46x in 35mm terms it’s very small, and it can feel underpowered at times, leading to a somewhat muddy view. It also appears to be tinged with a green cast, and needs a hand around it in sunny conditions for it to be visible enough to be usable.

It is usable, and the fact that your face is pressed against the body when you’re using it helps with stability too, but you’re more likely want to use the LCD in most conditions.

Adjusting the LCD screen all the way around to face the front flips the interface without any delay, and this also brings a comprehensive level of control over image capture. The virtual buttons for these are somewhat on the small side, but if you just want to capture selfies without any fuss you should find the system works very well, with effective face detection and a clear timer on display.

Image quality from the Panasonic ZS70 / TZ90 is generally very good. The metering system in particular does a great job of balancing a variety of scenes, and the iDynamic setting has a noticeable effect for the better in high-contrast conditions.

Colors are largely accurate using the Standard Photo Style, and have a pleasing vibrancy when the Vivid mode is called upon, while remaining faithful to the scene.

The camera’s Auto White Balance system can generally be relied upon, although it does tend to leave images somewhat neutral at default settings, so you may want to opt for an alternative option to add a little warmth here and there.

At lower sensitivities, noise in featureless areas such as blue skies is well suppressed. Detail is generally very good in most scenes for a sensor of this type, although the wide-angle end can be a little soft, and images with more complex details show the camera’s struggle to balance noise with noise reduction. Zooming in a little and stopping down the aperture a touch help things a little.

At the telephoto extension there’s typically a little chromatic aberration visible (although no more than we would expect) and the image stabilization system does a good job to keep things stable, although it’s worth taking a few shots as these can vary a little when examined close up. Texture and the detail-robbing effects of noise reduction can make themselves known at even the lowest ISO settings when zoomed in this far, but this is only really noticeable when viewing images at 100%.

The option to shoot raw images is useful in that images can be processed in-camera after they’re taken, and Panasonic’s excellent in-camera raw processing function provides a high level of control over things like color, noise reduction, contrast and so on. This is a useful way to create alternate versions of your images for immediate use, although anyone expecting them to have a useful degree of latitude when it comes to processing things like noise is likely to be disappointed; there’s only so much you can do with images captured using such a small sensor.

In good light, the quality of 4K footage from the Lumix ZS70 / TZ90 is surprisingly good. Detail is clear and there’s plenty of it too, while sound is also nice and crisp. You don’t quite get the full benefit of the five-axis OIS system when recording 4K video, as you do when shooting HD video and stills, but the system still has a noticeable positive effect. On occasion it can take a little time for the lens to focus properly when zoomed right into the scene, but when it does it adjusts this smoothly.

The Panasonic Lumix ZS70 / TZ90 certainly has a compelling mix of features to recommend it. Its expansive zoom range should satisfy most situations, while its excellent touchscreen and a broad range of controls makes capturing whatever you want a doddle.

If you’re buying this camera for its selfie functionality you’ll also be pleased to know this works well, even if some of the features here are novelties rather than necessities. The camera is also capable of capturing very good 4K video, although less so in low light.

Slightly soft results at wide angles, together with mediocre viewfinder performance and questionable handling, let it down somewhat, and it’s up against a handful of models whose age necessitates a lower asking price. Of course, the price of the ZS70 / TZ90 should also start to fall soon, at which point it will be worth considering if its tilting screen, 4K video and a viewfinder are high on your wish list.