When we look at the planets and moons of our solar system today, it would be very easy to be fooled into thinking that everything always looked this way. But over the past few years, scientists have learned to their surprise that the solar system used to look very different indeed. Below we’ll list some of the shocking discoveries that show how a series of violent events shaped our solar into what we see today.

1. When Theia smashed into Earth

The question of how the moon formed has long been an argument among astronomers, but evidence over the past few years points to a dramatic answer: that it was formed by a direct collision with Earth by another planet.

The Giant Impact Hypothesis states that within the first 100 million years or so after the Earth formed (4.5 billion years ago), a planet around the size of Mars directed impacted it.

Known as Theia, this small planet was completely obliterated by the collision. Earth fared little better, with a huge mass of material thrown out by the impact – material that would one day reform and cool down as the Moon.

The theory may sound far-fetched, but it now has mainstream approval, with evidence for this astonishing encounter mounting with every study.

We know the formation of the early solar system must have been a violent place, filled with rock and debris flying everywhere. The most dramatic evidence for this comes from the innumerable craters observed across every single planet, moon, even asteroid, in the solar system.

More so because each of these bodies show that they must all have formed and cooled sufficiently before the impacts began.

Known as the Late Bombardment Period, this is thought to have occurred around 4 billion years ago, and was effectively caused by left-over debris from the solar system’s formation being flung about like pinballs.

As various craters evidence, it was a particularly violent period. At first it wasn’t clear what might have caused this sudden bombardment, but we now have a clue…

For a very long time, no computer model of our solar system’s formation resulted in the arrangement of planets that we see now. That was puzzling, because the overall process of planetary formation is something we can observe around other stars.

One astonishing solution, proposed in 2005 by a group of astronomers in Nice, France, is that the planets we see now didn’t not form in those positions, but drifted into them over time. If true, the Nice model would certainly explain why the Late Bombardment Period happened.

But it goes further than that: the most recent version, Nice-V, claims that the solar system used to have an ice giant planet, which was hurled out of our solar system by the movements of the other giant planets.

If it all sounds far-fetched, the problem is that the maths actually works out. It remains, to date, the only computer model of the solar system that actually predicts the positions of the planets as we see them now.

Evidence to support the Nice model continues to mount. This week a study to be published Astronomy & Astrophysics modeled how Jupiter may have moved in the early solar system. Their conclusions are striking.

According to the study from Lund University, Jupiter originally formed in an orbit four times farther away from the sun than it does now. Over a period of less than a million years, Jupiter migrated inward to its current orbit.

Aside from anything covered so far, a striking piece of evidence for this comes from Trojan asteroids, which share Jupiter’s orbit. There are two distinct groups, and computer models show that these must have been picked up while Jupiter was roaming into its current position.

We’re going to find out more about this, as NASA will soon be launching a space probe named Lucy to analyze these Trojan asteroids.

5. When a planet collided with Uranus

An odd feature of Uranus is that the planet effectively spins on its side by comparison to the other planets in the solar system. This has proven impossible to explain by normal means. The only viable alternative is a collision theory.

Originally it was suggested that a comet might have collided with the gas giant, but more recent modeling suggests something much bigger would have been needed to knock Uranus so completely on its side – something twice the size of Earth.

Computer modeling by astronomers at Durham University published a study in July last year suggesting a proto-planet, mostly made up of rock and ice, struck Uranus around 4 billion years ago. This possibly occurred while the giant planets were all still moving through the solar system, according to the Nice model.

This collision theory adds an interesting new twist though: fallout from the collision effectively smothered the core of Uranus, preventing heat from there reaching the outer atmosphere, thus explaining why Uranus has what is an otherwise inexplicably cold surface temperature. 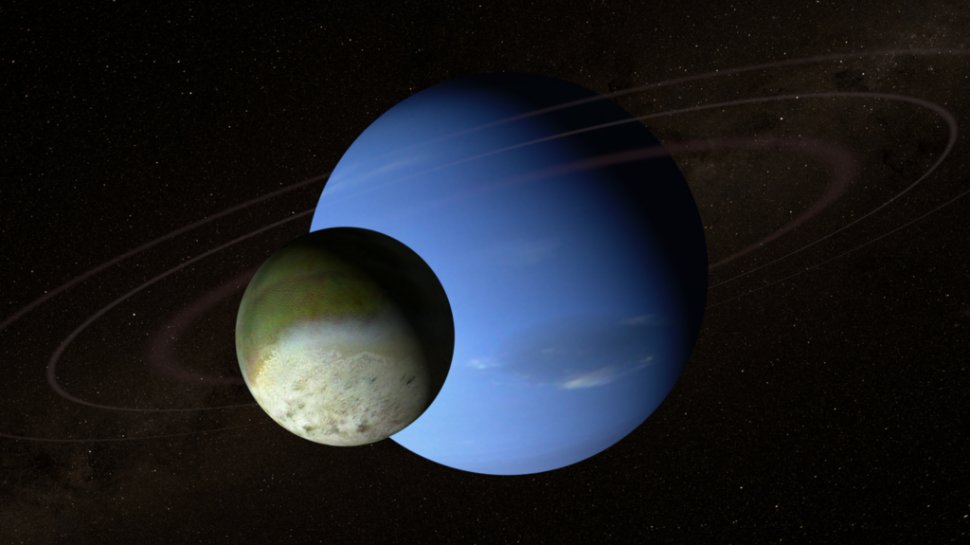 It’s not just the planets that have been moving around the solar system. Research now suggests that Triton, the largest moon around the planet Neptune, didn’t originally form there.

The key evidence pointing toward this theory is that Triton orbits Neptune in a retrograde motion. Effectively, it moves backwards by comparison to all of Neptune’s other moons.

Computer modeling has since shown that Neptune could indeed have captured Triton, especially while the gas giant was migrating through the solar system to its current position, along with the other giant planets.

It may seem like planetary collisions are a rare and extraordinary event, and yet we have another possible scenario in the form of Mercury.

Simply put, Mercury is so unusually dense that it resembles something more like a planetary core than a planet. But if so, where is the rest of Mercury?

Even though Mercury is very close to the sun, heat and solar winds alone are not enough to strip out Mercury’s outer layers. Computer modeling suggests that a giant impact by another small planet could have created what we see now.

However, this theory isn’t clear-cut. The biggest problem being, if something struck Mercury, then where did the rest of it go?

8. Phaeton – the planet that never was?

A popular theory in the 18th century saw a pattern in the sequence of planets. Later known as the Titius-Bode Law it successfully predicted the position of Uranus, though it failed to predict the position of Neptune.

However, part of the sequence fell on the asteroid belt. Some early astronomers thought this meant there used to be a planet there, only to have somehow been destroyed – perhaps by Jupiter’s gravity.

The idea fell out of favor, and now mainstream science believes the asteroid belt is just remnants from the formation of the solar system.

There are two curious reasons why we may yet see more discussion about this, though.

The first is that the asteroid belt has been found to comprise of two main groups of distinct asteroids, of very different composition. The second is that one of the most massive asteroids there, 16 Psyche, gives every suggestion of being a small planetary core.

Is it possible that the asteroid belt was formed by the collision of two small planets We’ll soon find out NASA will soon launch a probe to explore the asteroid belt, and especially 16 Psyche.

Welcome to TechRadar’s Space Week – a celebration of space exploration, throughout our solar system and beyond. Visit our Space Week hub to stay up to date with all the latest news and features.