Apple’s macOS Mojave has been available on the best Macs for a few months now, and with it we have access to core iOS apps, like News and Stocks. We also have a system-wide Dark Mode and increased productivity straight from Finder – there’s a lot to love about macOS 10.14 Mojave.

And, while we should be seeing more iOS apps make their way over to the Mac over the coming years, there is plenty to macOS Mojave to love right now – even if there are some macOS Mojave problems out there.

We’ve had macOS Mojave on our Macs for a few months now, and its various problems are slowly being patched out. For instance macOS 10.14.2 fixes some problems with third-party USB-C monitors. So, now that macOS Mojave is here, we’ll dive into all the features the new OS offers, so you can decide whether it’s worth the upgrade in 2019. The best part? It’s completely free. 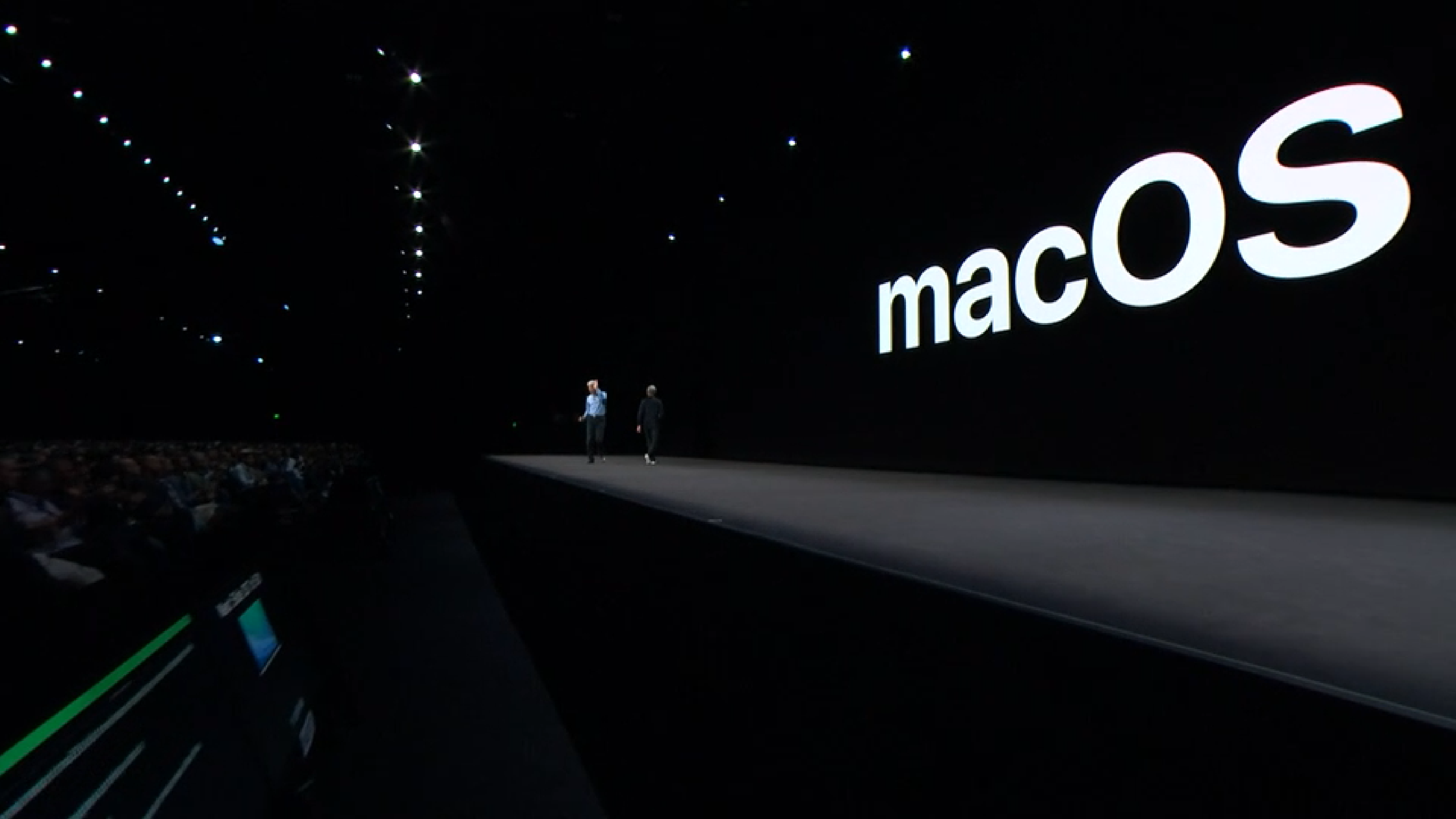 Apple announced macOS Mojave back in June 2018 at WWDC 2018, where most of the features were detailed.

This was followed by a Public Beta launch back in July, then finally the macOS Mojave launch on September 24 2018.

Apple’s macOS 10.14.2 has been released, and with it you can expect your standard stability and security fixes, alongside some awesome News improvements. There’s also support for real-time text (RTT) when using video calling. And, earlier, Apple released a supplemental update to macOS 10.14.1 to boost the reliability for the new MacBook Air.

Then, Apple has seeded the developer’s beta for macOS 10.14.2. And, while we don’t have any idea what’s actually in the beta, we figure that it will be mostly bug fixes and stability. Hey, maybe Apple will fix that slow login screen.

Keep it tuned, because we will keep this section updated with all the newest updates as they release. 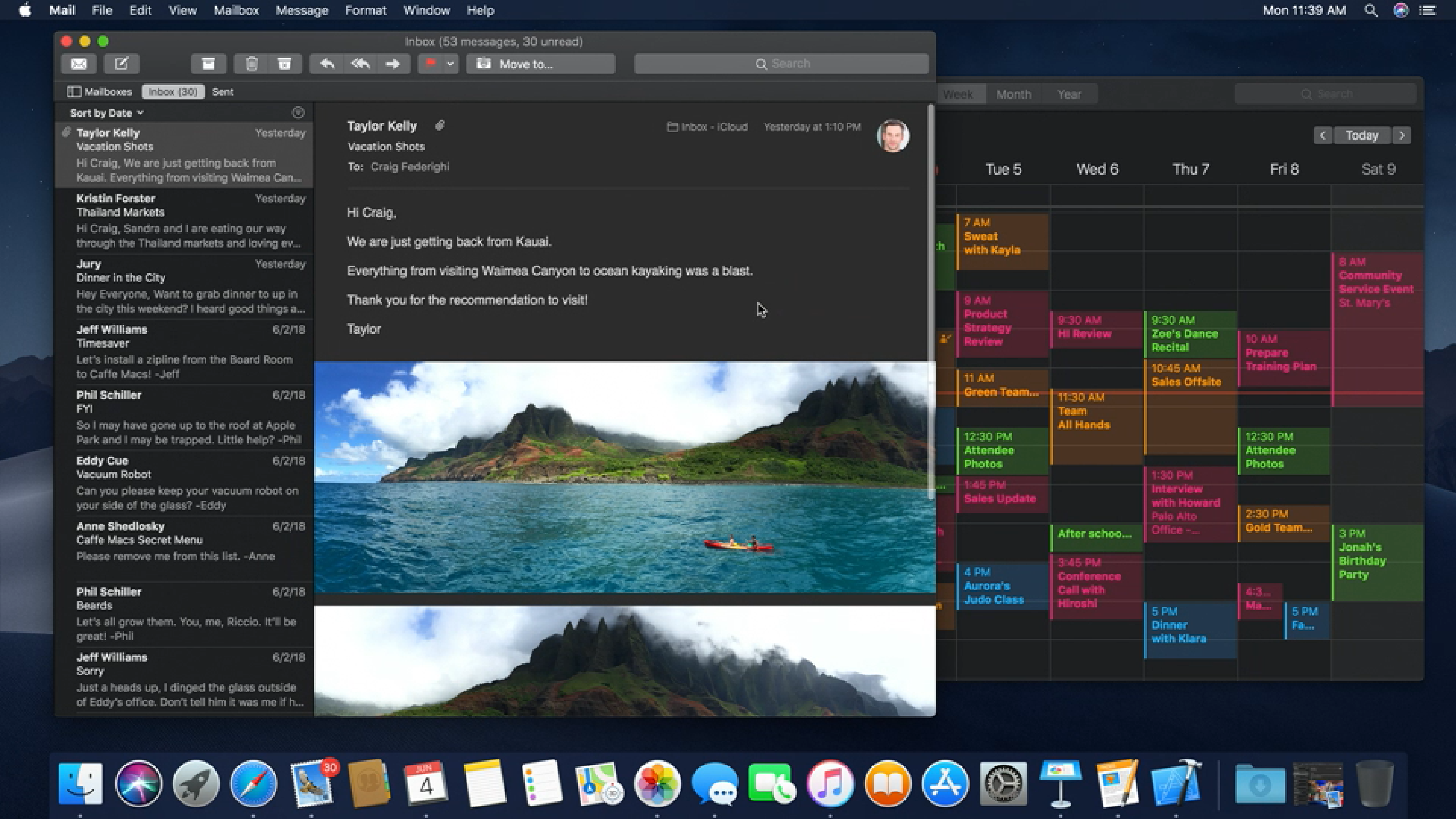 So, now that macOS Mojave has been out for a while, there are a ton of new features available to your Mac. And, we’re going to dive into a detailed overview of everything your Mac can do.

From Finder improvements to more rigid security, the best Macs are about to become a lot better.

Read on to discover all the new features coming to your Mac when you update to macOS Mojave. 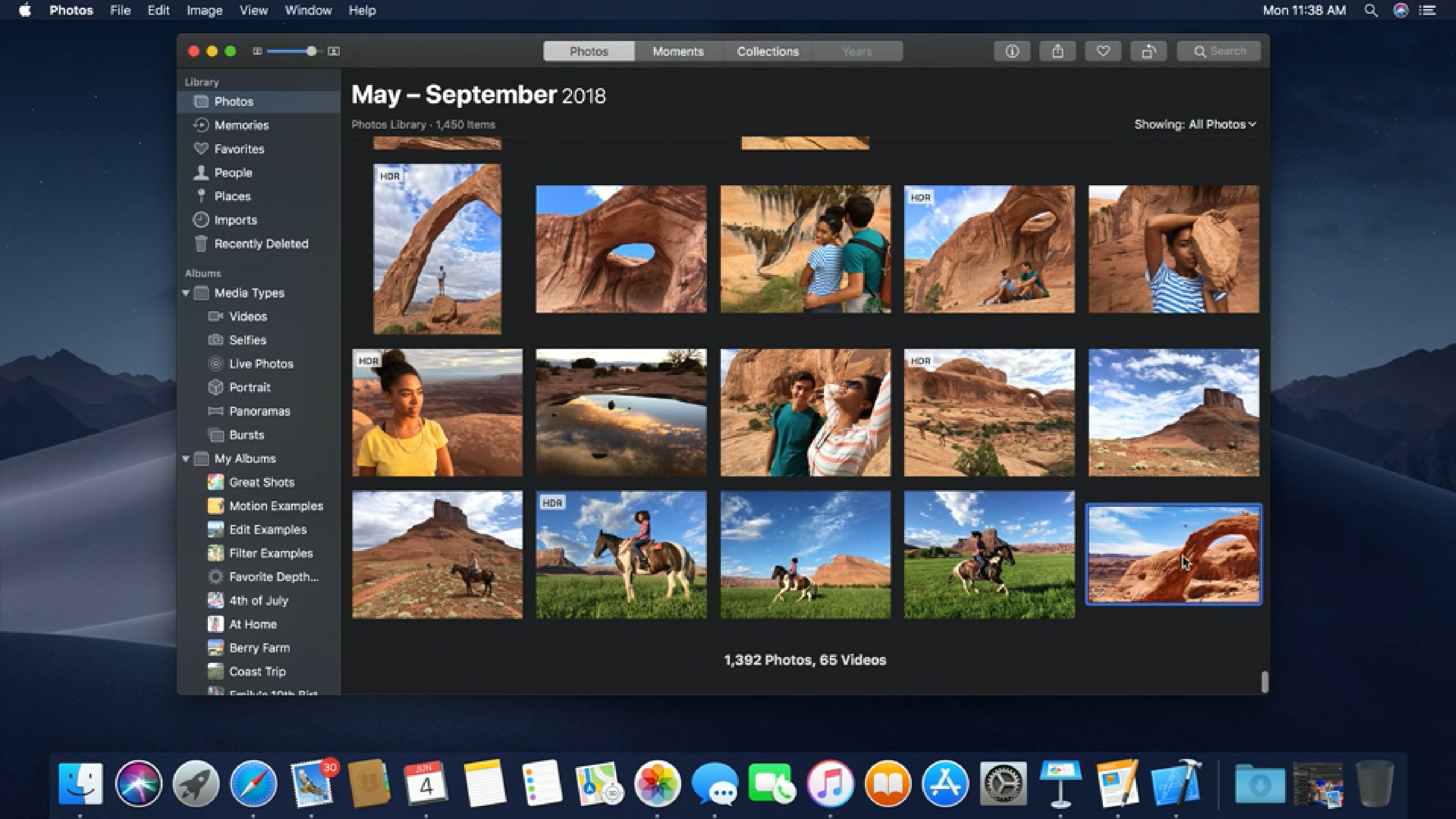 Apple’s macOS Mojave introduces a system-wide dark mode, which will extend to every first-party program on your Mac.

Even Xcode gets a full makeover, completely in black, making those extended programming sessions more comfortable for your eyes.

Third party programs will also be adopting this new theme, with changes happening automatically for any app that uses standard colors through AppKit.

Even developers that don’t use AppKit are working on bringing Dark Mode to their programs. For example, in a recent bug report, Google Chrome developers confirmed they’re working on a way to implement Dark Mode into the hugely popular web browser – they just have some issues to iron out first.

Initially shown as part of the initial release of MacOS Mojave, Group FaceTime has finally been released as part of macOS 10.14.1. This feature allows you to have FaceTime conversations with up to 32 people across iOS and macOS devices.

This feature is implemented in a way that makes it extremely intuitive in macOS Mojave. You can start a group FaceTime chat from any group iMessage thread, and invites will be sent via  a ringless notification, so you won’t be disruptive.

Once you’re in a Group FaceTime Chat, it will automatically detect whoever’s speaking and bring them front and center, so that you’re always looking at the person actively speaking. 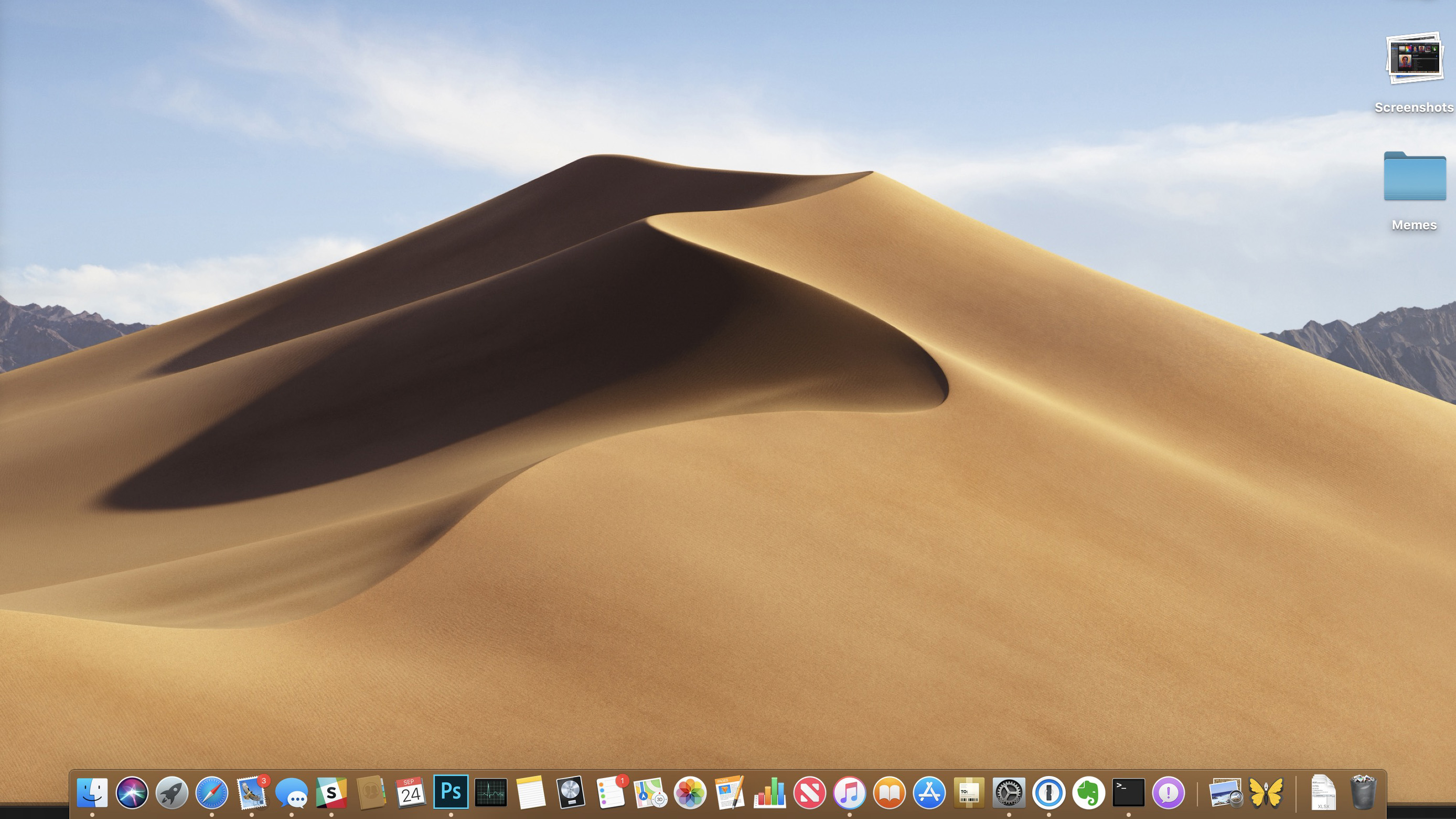 If you’re anything like us, your desktop starts to look like a virtual hurricane blew through it after a full day of work. With macOS Mojave, those days are over.

With Stacks, macOS Mojave will sort similar files together so that you have a less cluttered desktop – photos with photos, pdfs with pdfs – it’s great.

You’re even able to scrub through thumbnails with a two-finger scroll, so that you can make sure the file you’re looking for is actually in the stack. 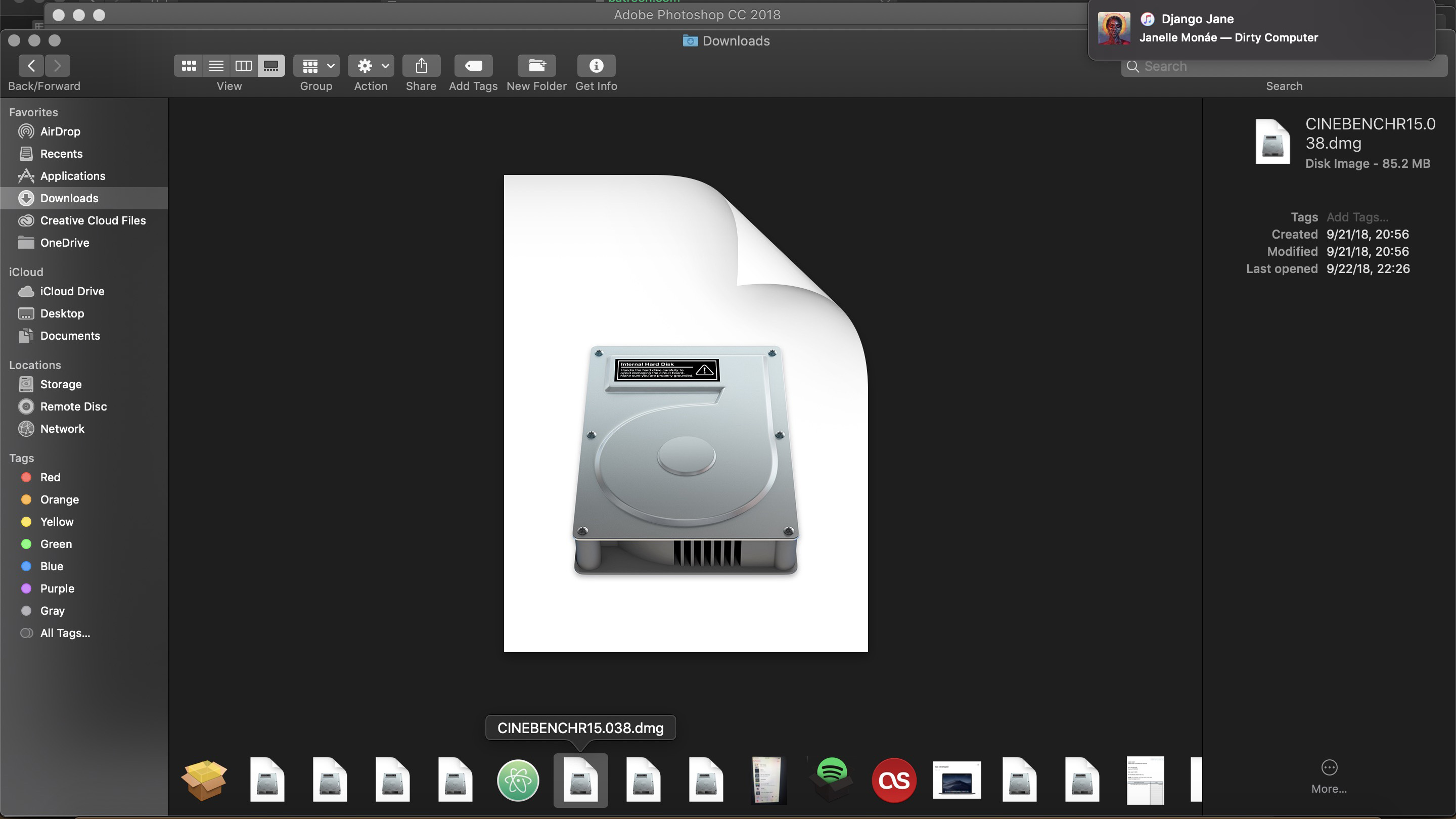 In macOS 10.14 Mojave, Apple has added a new Gallery View to Finder. This will let you quickly browse through, annotate and edit files. No matter what kind of file you select, you’ll be able to quickly and easily find exactly what you’re looking for.

This is made even easier, thanks to Apple adding a very detailed metadata display to the Preview pane. This makes it easier than ever before to take note of all the information of any file on your Mac.

And, thanks to the inclusion of Quick Actions in the Preview pane, you won’t even need to leave Finder to work on files. You should be able to edit images, add protection to files and more. You can even assign Automator tasks as Quick Actions to make browsing through files even easier. 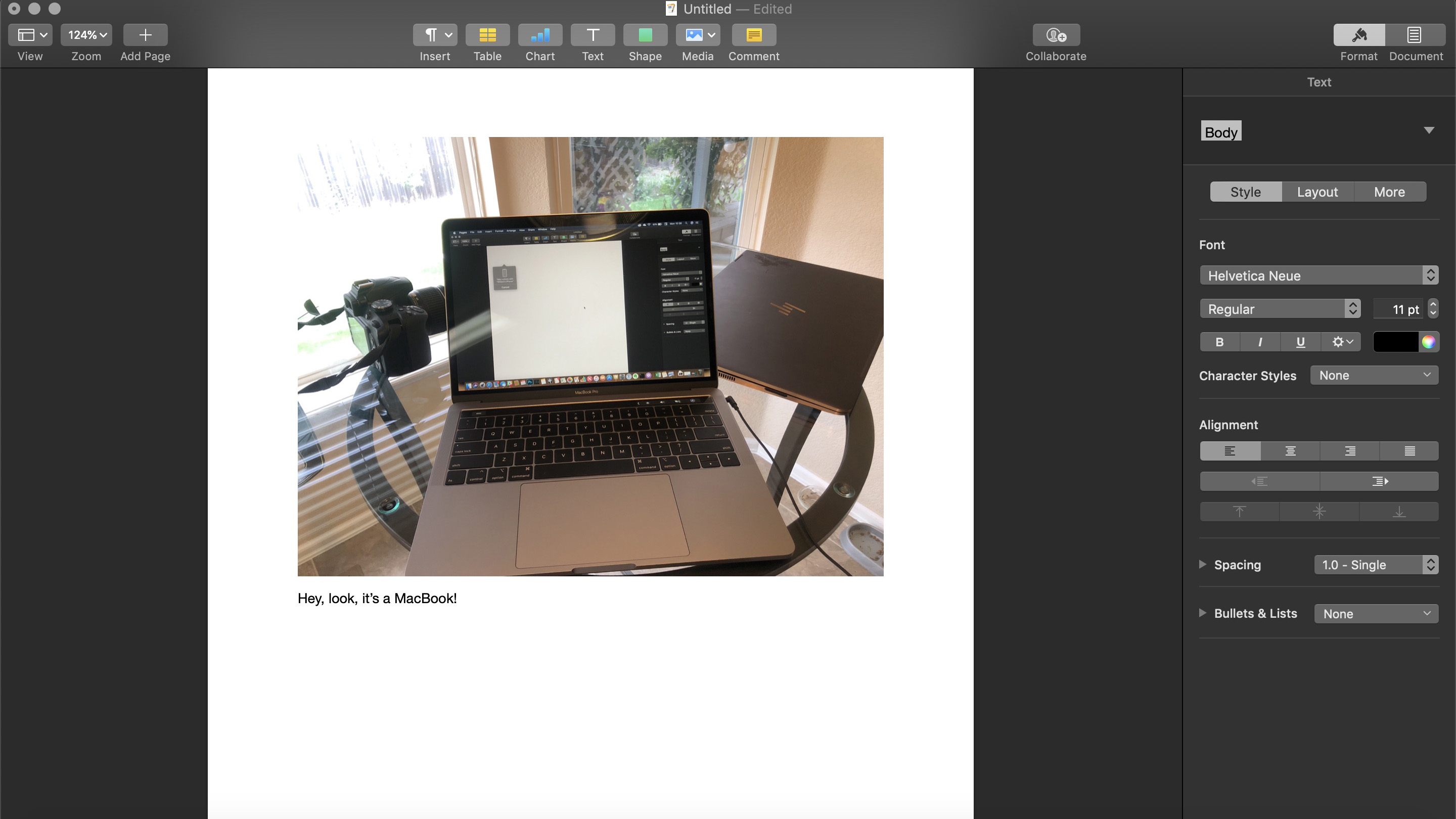 Have you ever found yourself working on a project, and you needed to implement a document or a photo? Well, with Continuity Camera, it’s easier than ever to do just that.

Across a multitude of different apps, like Numbers and Pages, you’ll be able to simply Control + Click in the body of the document, and select “Take Photo” or “Scan Documents.” It’ll then open the camera on your iPhone or iPad, where you’ll be able to take a photo and instantly pop it right into what you’re working on.

It’s smooth, it’s convenient, and it’s going to be a boon for anyone that needs to save some time while doing schoolwork or that next big project. 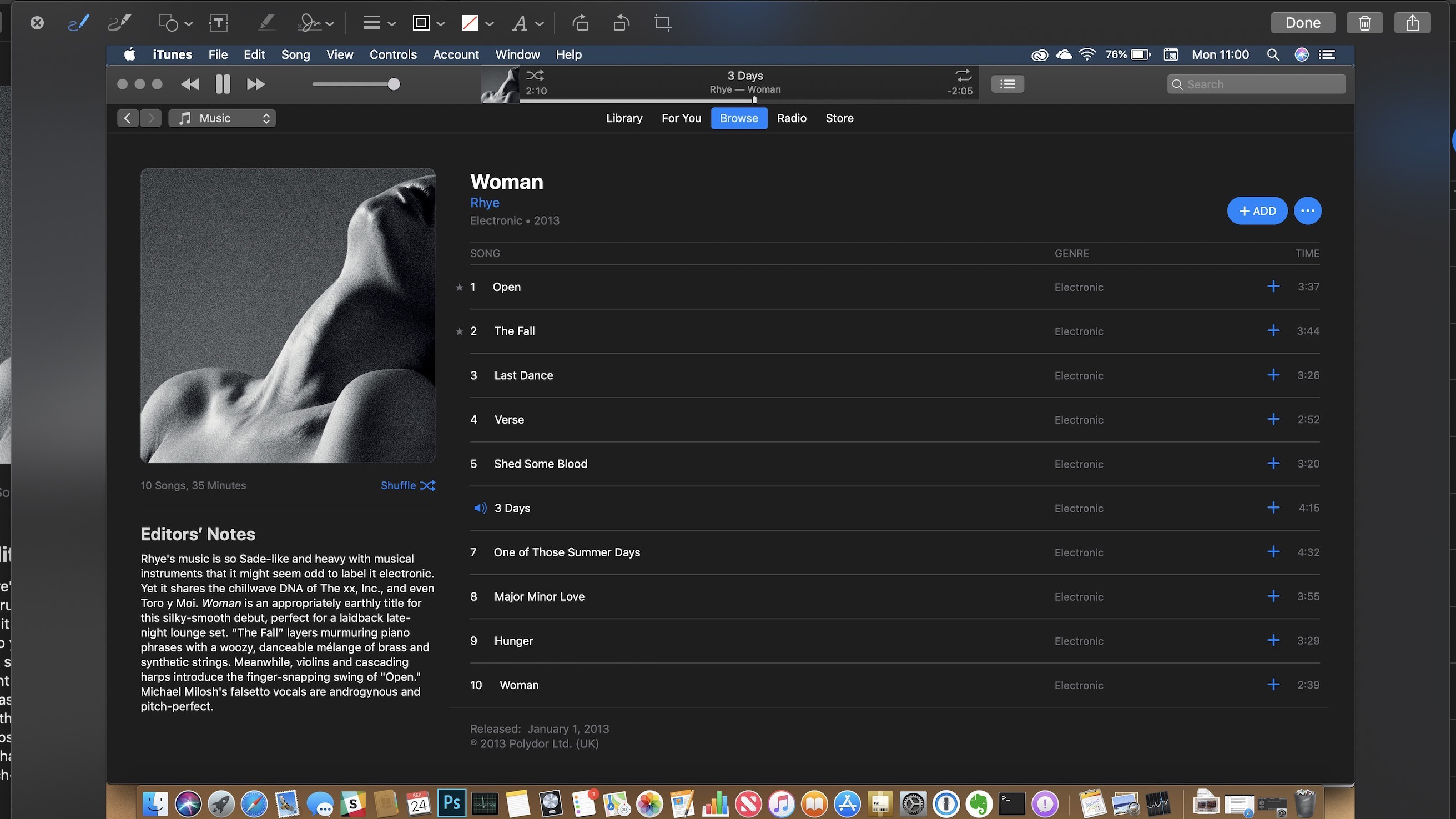 Markup in Quick Look and Screenshots

Quick Look is already an easy way to look at files quickly, and in macOS Mojave, you’ll be able to quickly and efficiently use Markup to edit files you open in Quick Look.

Markup is also implemented into screenshots. You’ll be able to bring up any screenshot and instantly edit any content within. Being able to quickly crop screenshots in macOS Mojave without any third-party photo-editing software is going to be a huge time-saver.

Once you capture a screen, you’ll see a preview image open up, similar to iOS 12, which you can click to preview and edit your screenshot.

That’s not all though, Screenshots are still a simple shortcut away, but with macOS Mojave, a new easy-to-use menu includes screen-recording tools, so that you can capture animated content. And, perhaps most importantly, you can choose to save the screenshot to your clipboard, saving time if you just need to send someone a quick screenshot. 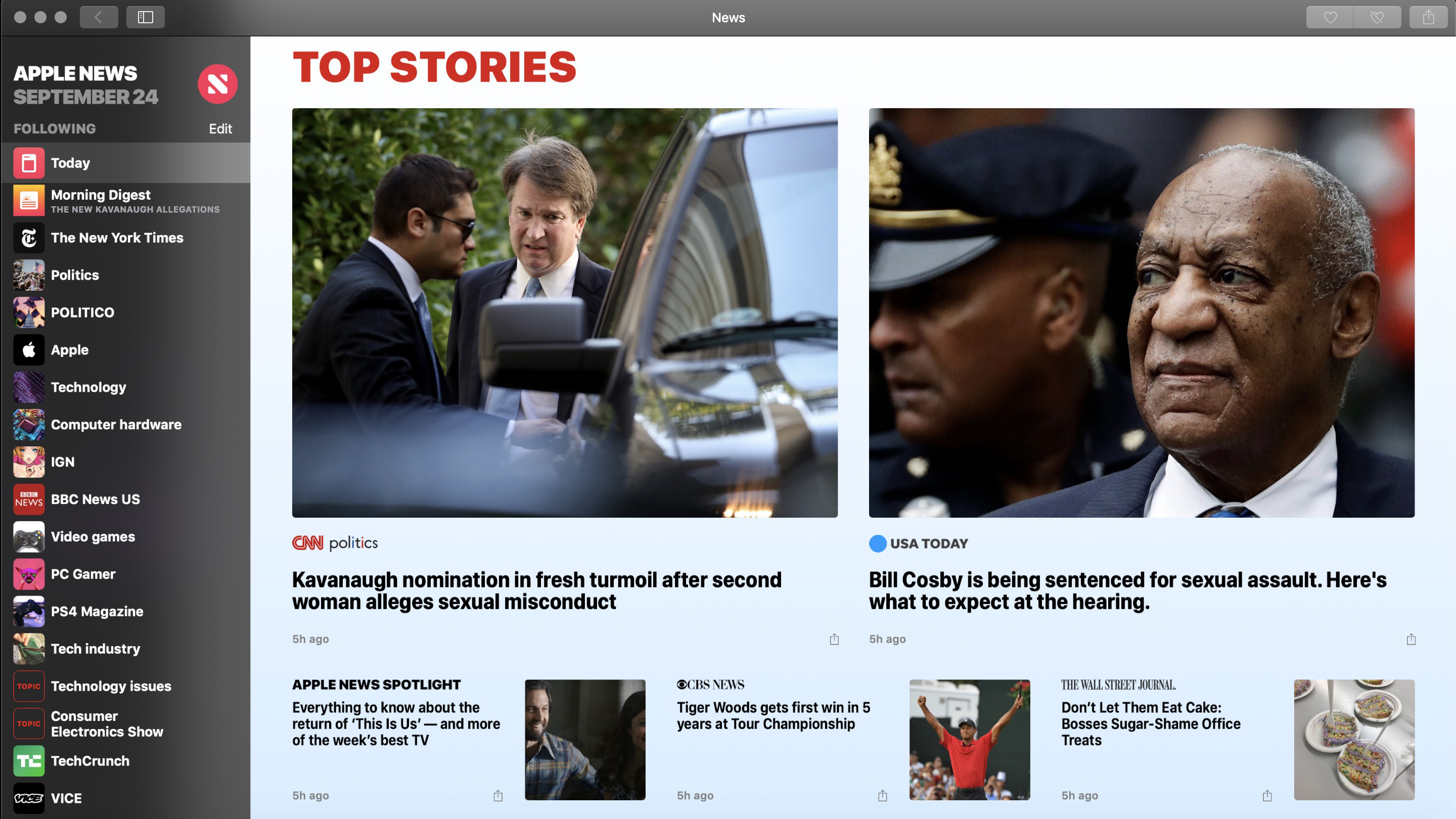 Apple News, Stocks, Voice Memos and Home are all brought over from iOS to macOS Mojave, with special care given to reformatting them to fit your computer.

These apps leverage the power of the best Macs to deliver an awesome experience. Voice Memos, for instance, will automatically transfer any memos you take between your iOS and macOS devices – rewarding anyone who utilizes the ‘Apple Ecosystem’.

This isn’t a full iOS app migration, however, but Apple did say it’d be bringing more iOS apps to the Mac in 2019, so we’ll just have to wait. 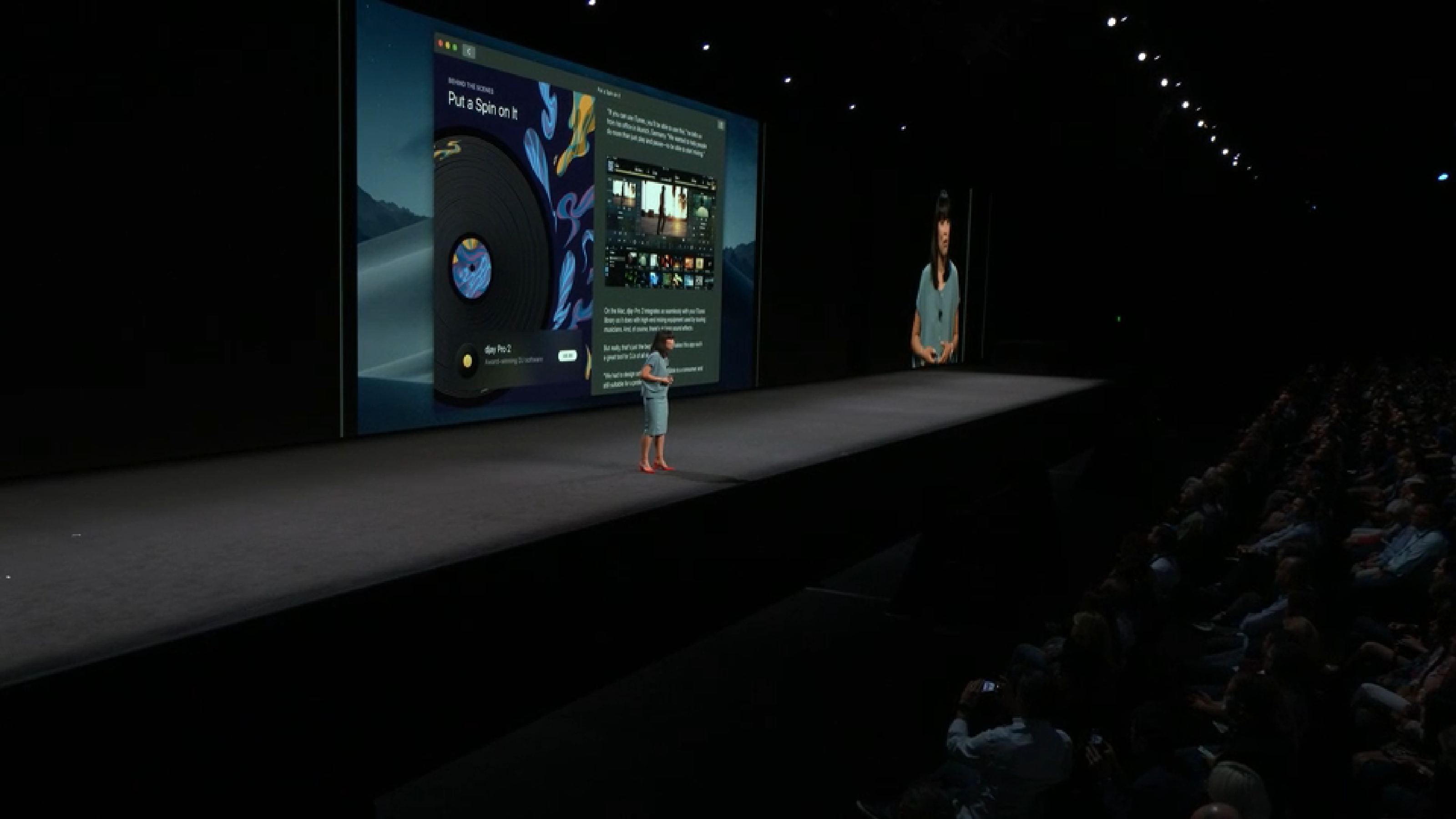 Apple is concerned about your device security, and now macOS Mojave asks for permission with more features, now including the camera and microphone. Mojave’s security also provides more robust protection for your file system.

Safari also has its own share of security enhancements, shutting down cookies that track you across websites, making sure Safari asks permission before it allows cookies of any kind to access your browsing data. This even includes those annoying social buttons that mysteriously appear on every page – Facebook and Twitter can’t track your activity outside of their own websites unless you grant them permission to. 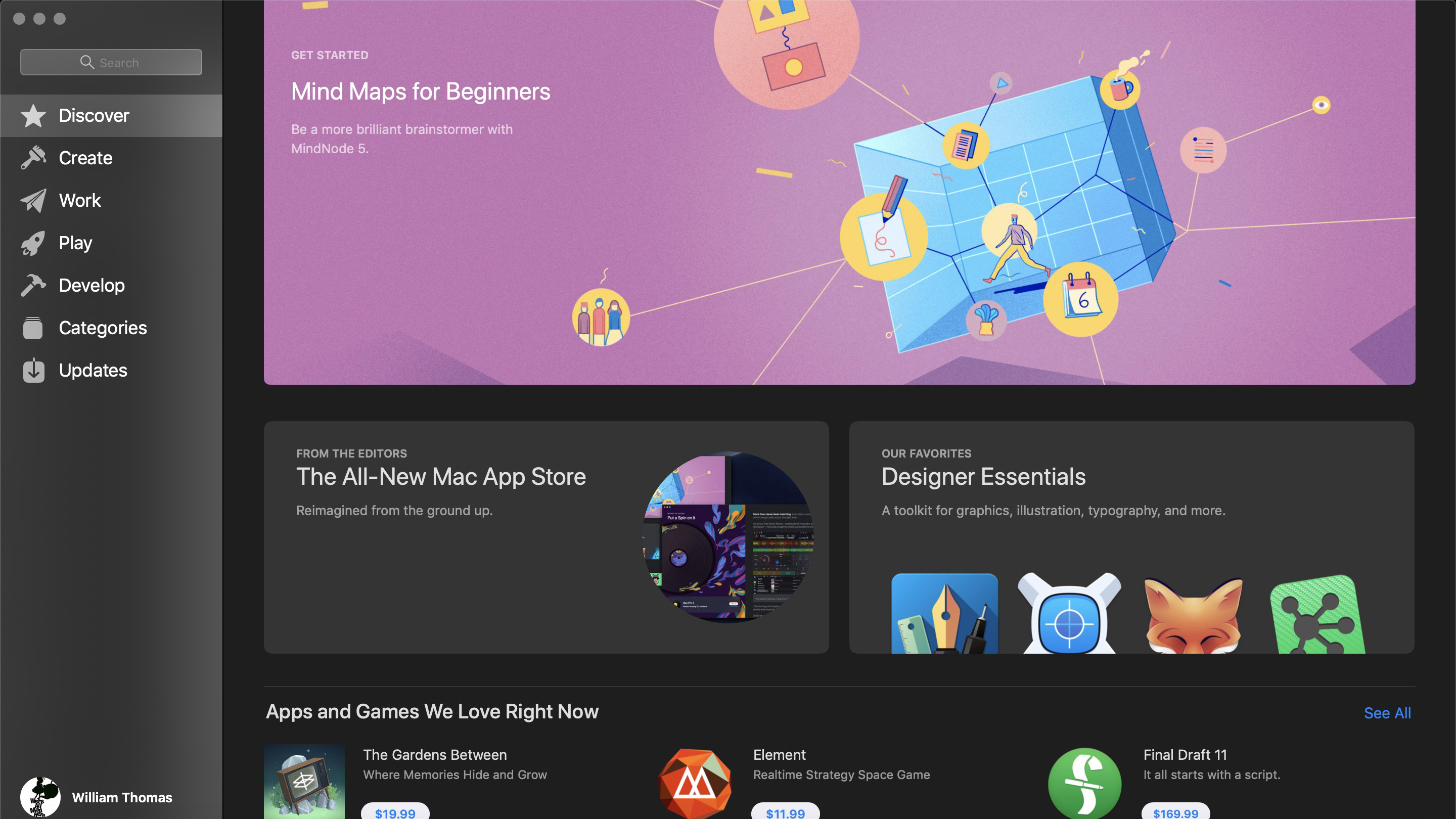 The App store has been a macOS staple for years now, but it always seemed a little out of place. That all changes with macOS Mojave. Apple has completely refreshed the Mac App Store, and it’s now designed exclusively for the best Macs.

Not only does it look great, but it also lets you browse through apps depending on what you’re trying to install. If you’re looking for an affordable alternative to Logic Pro X or Adobe Photoshop, it’s simple to find the best Mac apps for you.

The new Mac App Store also adopts the iOS App Store’s approach to editorializing its content. It’ll now have a much more modern interface with featured apps getting tutorials, spotlights and other such content. It really does bring the Mac App Store into the modern age.

And, perhaps more exciting is that a ton of third-party developers, like Adobe and Microsoft, are bringing their apps to the Mac App Store, so you don’t’ have to go through dodgy websites to get the apps you need. 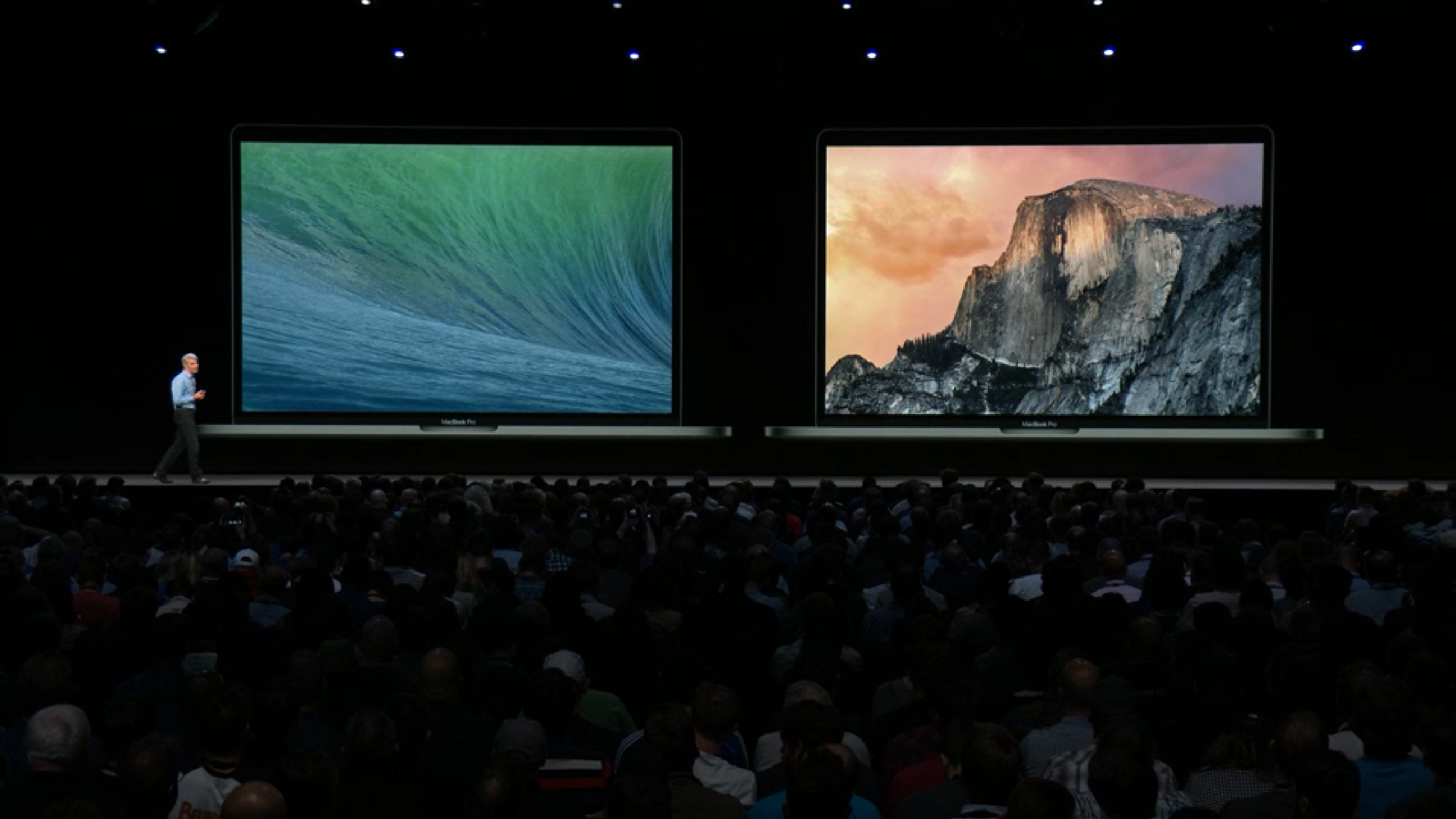 Unfortunately, with all these new features, some older Macs will have to go without updating to macOS Mojave. This is a departure from macOS High Sierra, which basically had the same requirements as macOS 10.12.

First off, macOS 10.14  requires at least 14.3GB of hard drive space for the installation, as that’s what was required last year. To keep it on the safe side, make it 20GB.

However, macOS Mojave requires more powerful hardware than High Sierra. macOS 10.13 required at least 2GB of RAM and OS X 10.8 or later – that’s not the case anymore. These are the Macs supported by macOS 10.14 Mojave.

Unfortunately, while the required models rarely change year over year, they have with macOS 10.14, so if you have an older MacBook, you might need to upgrade to enjoy this new version of the OS.