Organizer
Gadget news
LG HomeBrew takes all the fun out of making your own beer – but I want one anyway
3:00 am | January 11, 2019
Author: admin | Category: Cameras | Comments: None

I go to plenty of tech press conferences where I hear a lot about how 5G is going to change my life or how I need a smart fridge to be happy, but this week was the first time I heard the word ‘beer’ said on stage.

LG’s press conference was my first of CES 2019 and the company spent a lot of time talking through its upcoming smart home plans – like its new smart closet – but my ears pricked up when I heard the phrase ‘home brew.’

The LG HomeBrew is best described as a Nespresso-like brewery kit. Instead of putting capsules in and expecting a cup of coffee in a few minutes time, you put in a capsule that makes you a refreshing beer. Eventually.

Five types of beer, in fact, which are American IPA, American Pale Ale, English Stout, Belgian-style Witbier and Czech Pilsner. That’s it – put the capsule in, and the machine will do the rest of the work for you.

Unlike your Nespresso at home, this is going to take a while. Two weeks, to be exact, before you can have a refreshing glass of your first HomeBrew creation.

Turns out, this isn’t a fresh announcement for 2019, but I had missed it when it was first announced late last year. This is the kind of thing that made me look up from what I was writing and pay attention for two reasons.

Firstly, I love beer. Secondly, and perhaps more importantly, this is outright weird. There’s nothing else like it on the market – there’s even an app so you can keep track of the brewing process on your phone and make sure everything is going well.

While it is unique, that initial excitement I felt when I first heard of the product gently started to wear off as my first full day at CES went on. By the time I got to go see the product in the flesh for the first time (over 24 hours later) I’d had that excitement beaten out of me.

Full disclosure: I’ve never homebrewed beer, but I want to. I want to so I can mess with the ingredients to create something no company can offer me on a shop shelf.

I want to mess around with the hops going into my unique concoction. I want to wait two weeks to discover it was all a mess and I’ve made something that’s barely drinkable but then persevere because it’s something I’ve made. 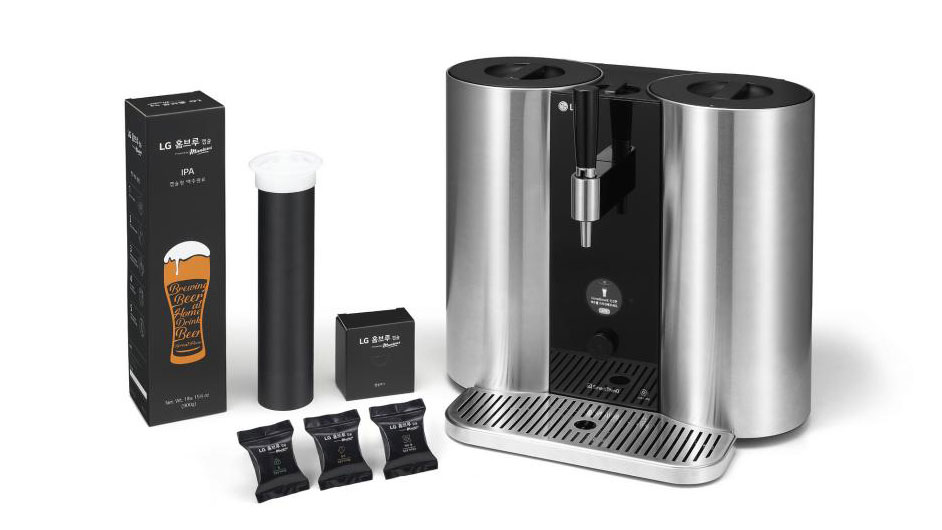 Capsules that you can insert into a machine, wait two weeks and then come back to that exact same beer you set out to create a fortnight ago don’t offer that same experience.

At launch, it’s set to be even more boring as the company is only making those five flavors from a company called Muntons. That’s five different types of beer, so you don’t even get the selection that you’d expect from your average shop either.

All of that said – I still want an LG HomeBrew. You do lose that fun element of playing with what you’re making, but as an introduction to homebrewing I think this will be an interesting first step.

The fact you can track its progress within the app rather than panicking about whether it’s done and given this machine even cleans itself after you’re done make the HomeBrew a unique product no other company offers.

We don’t currently know how much the HomeBrew is set to cost or when you’ll be able to buy it, but rest assured that when you can I’ll be scrabbling to find one and I’ll let you know how my first batch goes.