Well, this is something new: LG’s take on the foldable world of smartphones is that we don’t need them… just yet. What we all want really is a second screen that we can bolt on the side.

What to call it? How about the LG DualScreen? That sounds about right, and that’s just what’s appeared at MWC 2019. Designed as a companion to the LG V50 (curiously not the LG G8) this is essentially a fat ol’ case that the phone clips into. 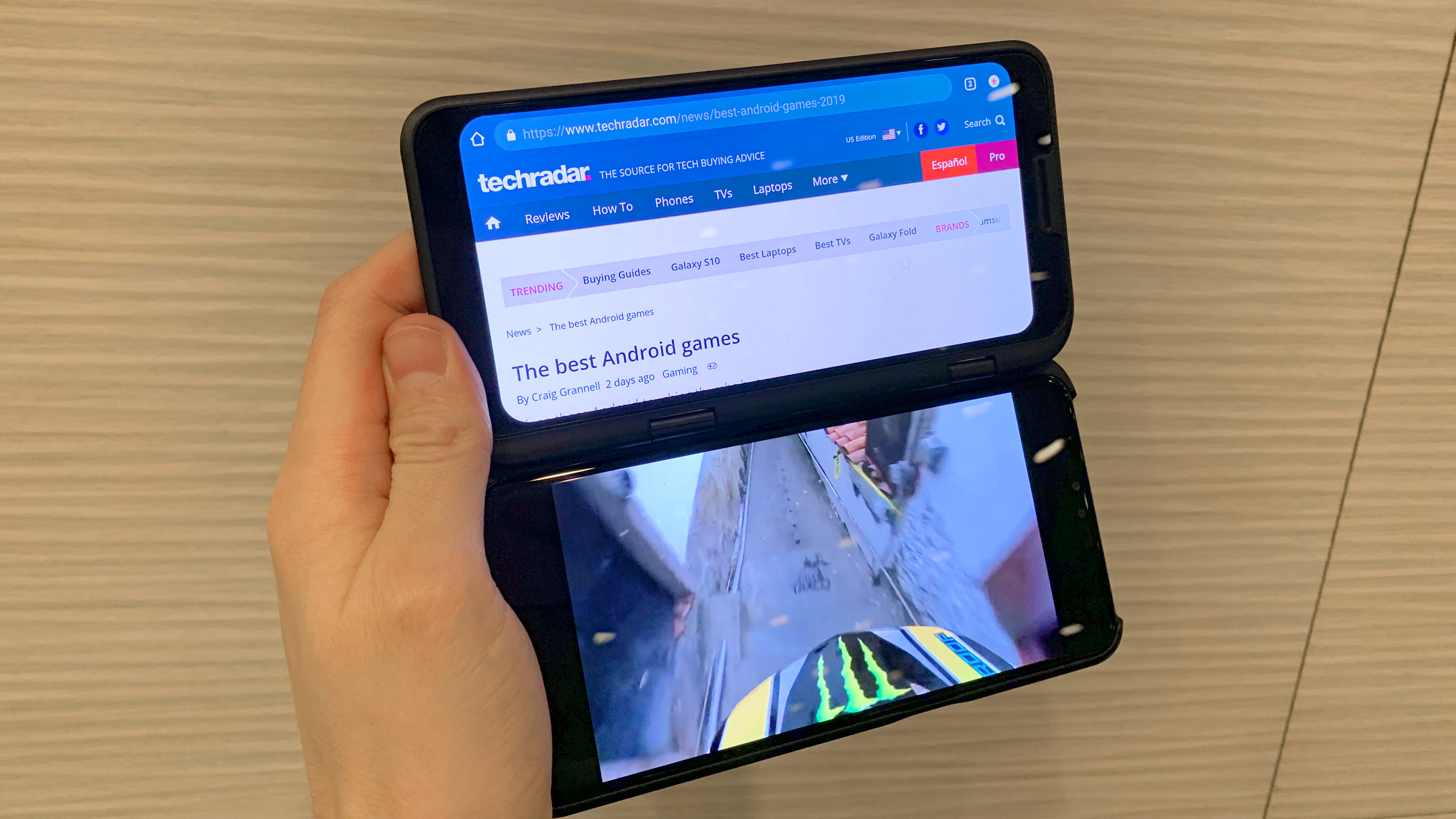 From there you’ll get access to another display that can communicate with the phone, giving you the equivalent of a secondary monitor for your phone that’s tethered onto the side.

We’ve got no idea when the LG DualScreen will be coming to the market, or the cost, but it can’t be that far away – we’d expect it to launch before the summer this year, and we highly doubt it will be cheap. 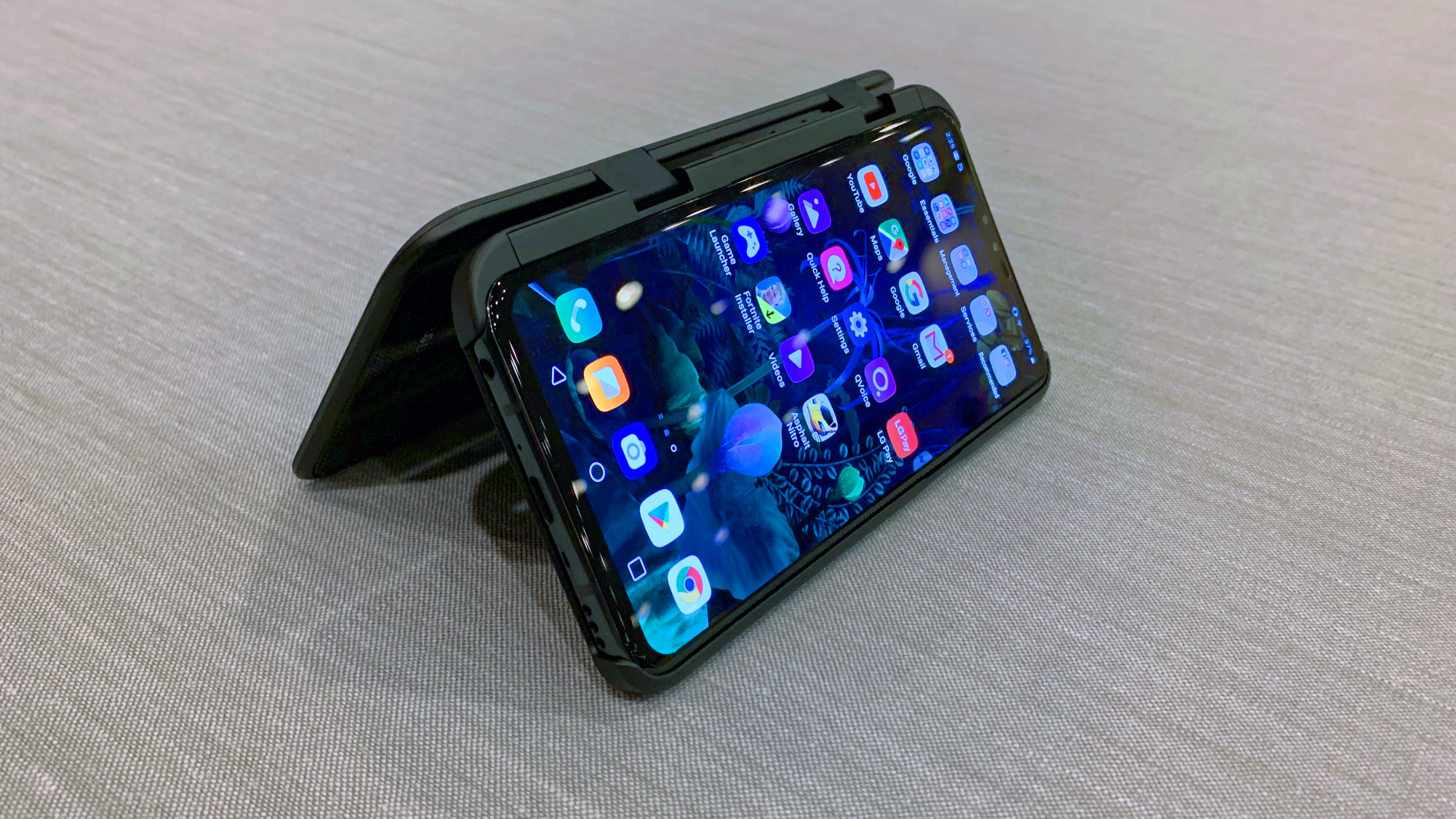 The LG DualScreen clips fairly nicely alongside the LG V50, but it adds rather a large amount of heft to your unit. It draws power and data from the pogo pins at the rear of the phone, although the information is sent wirelessly.

It’s not Wi-Fi, rather a specific short-throw signal that allows for low latency connection – important if you’re (spoiler alert) using the DualScreen as a gamepad. 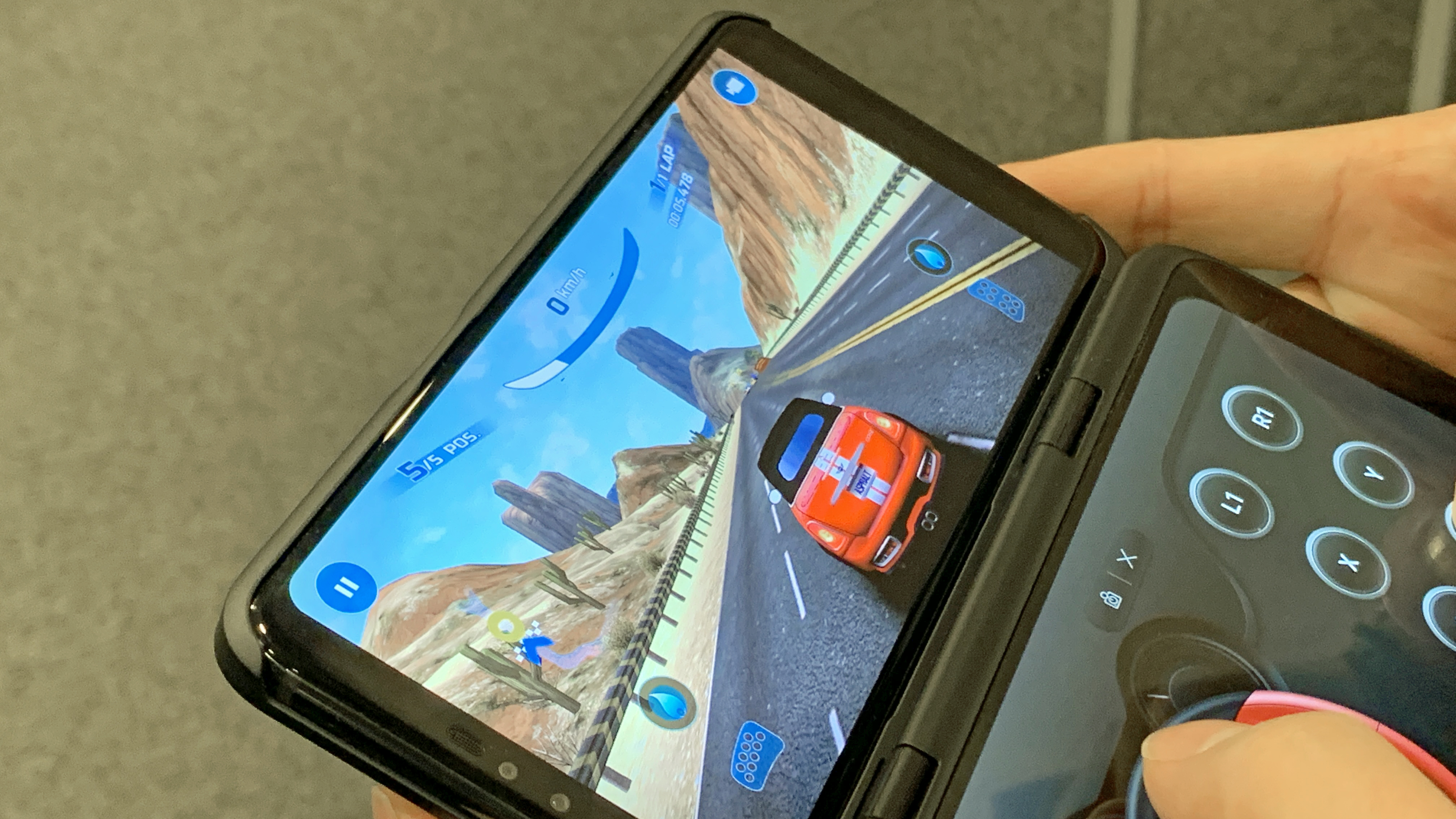 The DualScreen doesn’t look good though – it’s a fairly chunky device that’s lighter than the phone, which makes the balance a little off. We’re not saying we’d rather it was heavier, but we guess that it’s a little bit unbalanced compared to other ‘real’ foldable phones.

The bezels around the 6.2-inch OLED screen (which is only Full HD, rather than the QHD option on the V50) are rather chunky and look a little cheap compared to the phone itself, and their presence means that you can’t have any apps that spread over the two screens.

LG believes that this is fine, as too few apps are capable of working in these large-screen modes that the likes of Samsung and Huawei are throwing out with their foldable devices.

The rear of the phone is shiny and it’s easy to get smudged with fingerprints – but there’s nothing new there and holding the device with both screens shut feels like you’re holding a solid phone indeed.

The hinge of the screen also folds the whole way around, so you can prop up the V50 with the DualScreen on and watch a movie, or use the rear screen as a viewfinder for the camera.

A new way to use your phone

So how does the LG DualScreen actually perform? Does it make anything easier or more immersive, or is it just a total gimmick?

Well, it’s somewhere in the middle. Seeing the device demonstrated, with the LG reps skillfully navigating through the different camera or gaming modes, makes everything look quite slick. Pick it up with no instruction though, and you’re instantly lost. 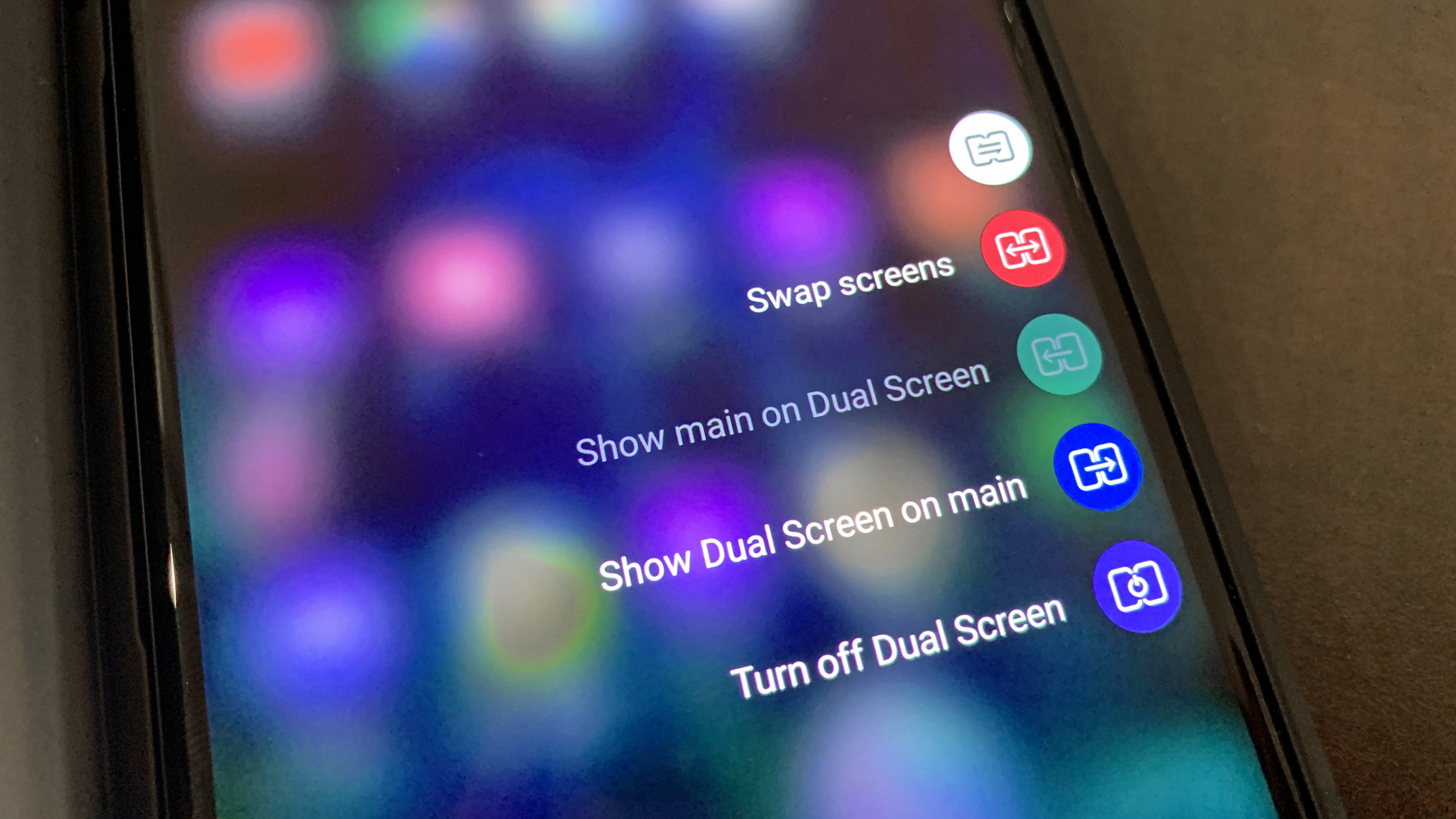 Firstly, there’s a small power button that appears on the side of the screen that you’ll need to tap to activate the other display. This menu allows you to switch the screen that’s in play, or show what’s on one display on the other.

This is a fiddly experience as it’s too small, and flipping the displays around didn’t feel hugely intuitive (or have a point to it, necessarily). 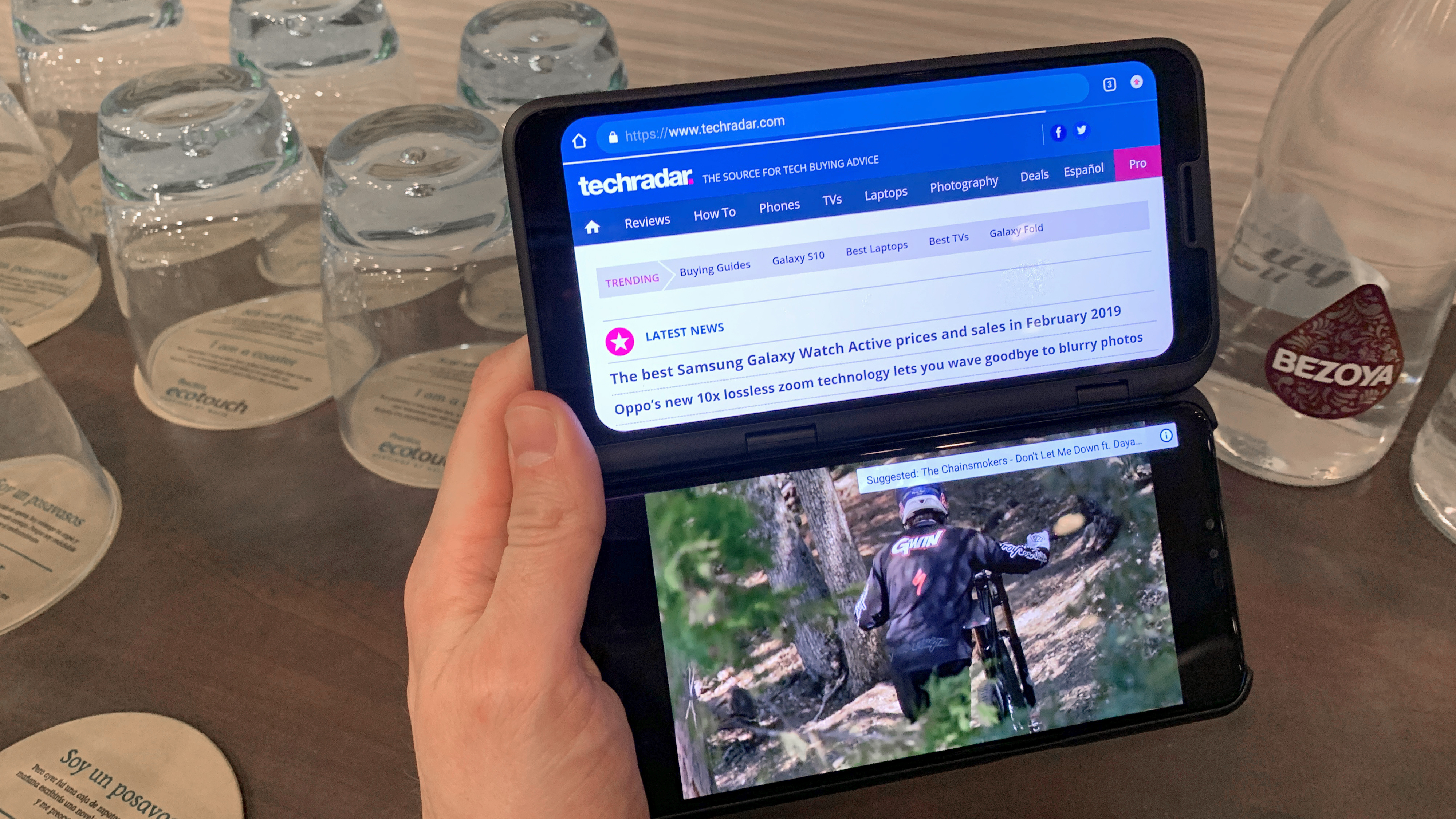 We tried watching a video while browsing the web, and in fairness it worked rather well. You could easily stream a YouTube video or Netflix show on one side and then browse for info on the other – but all that did was increase guilt that we’re not focusing enough on what’s important in life, adding in another distraction.

The gaming mode was the most appealing, with the DualScreen functioning as the place to see the gameplay and the bottom for gamepad controls, with four to choose from. This was easily the coolest bit, but despite LG claiming it worked just like a Bluetooth controller, it wasn’t easy to set up for a few games. 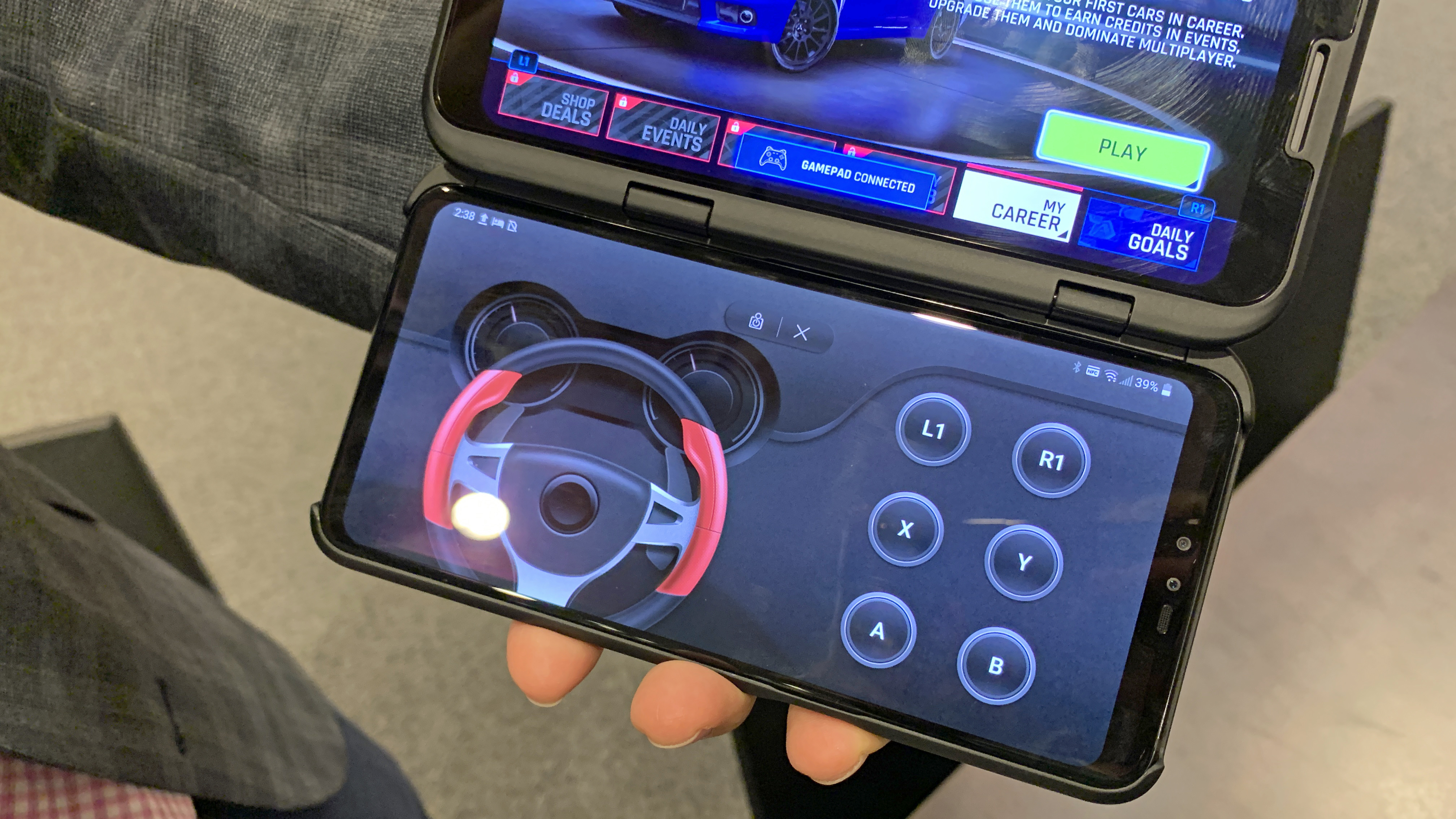 The camera is probably where the LG DualScreen was at its most impressive, with the phone showing you the live image on the screen and then the options available if you used the other sensors and how that would change your photo.

The screen quality of the DualScreen was just fine though, and at no point did we feel it was too low-res. We wish it was the same 6.4-inch size as the phone though, if nothing else just to make things more aesthetically pleasing 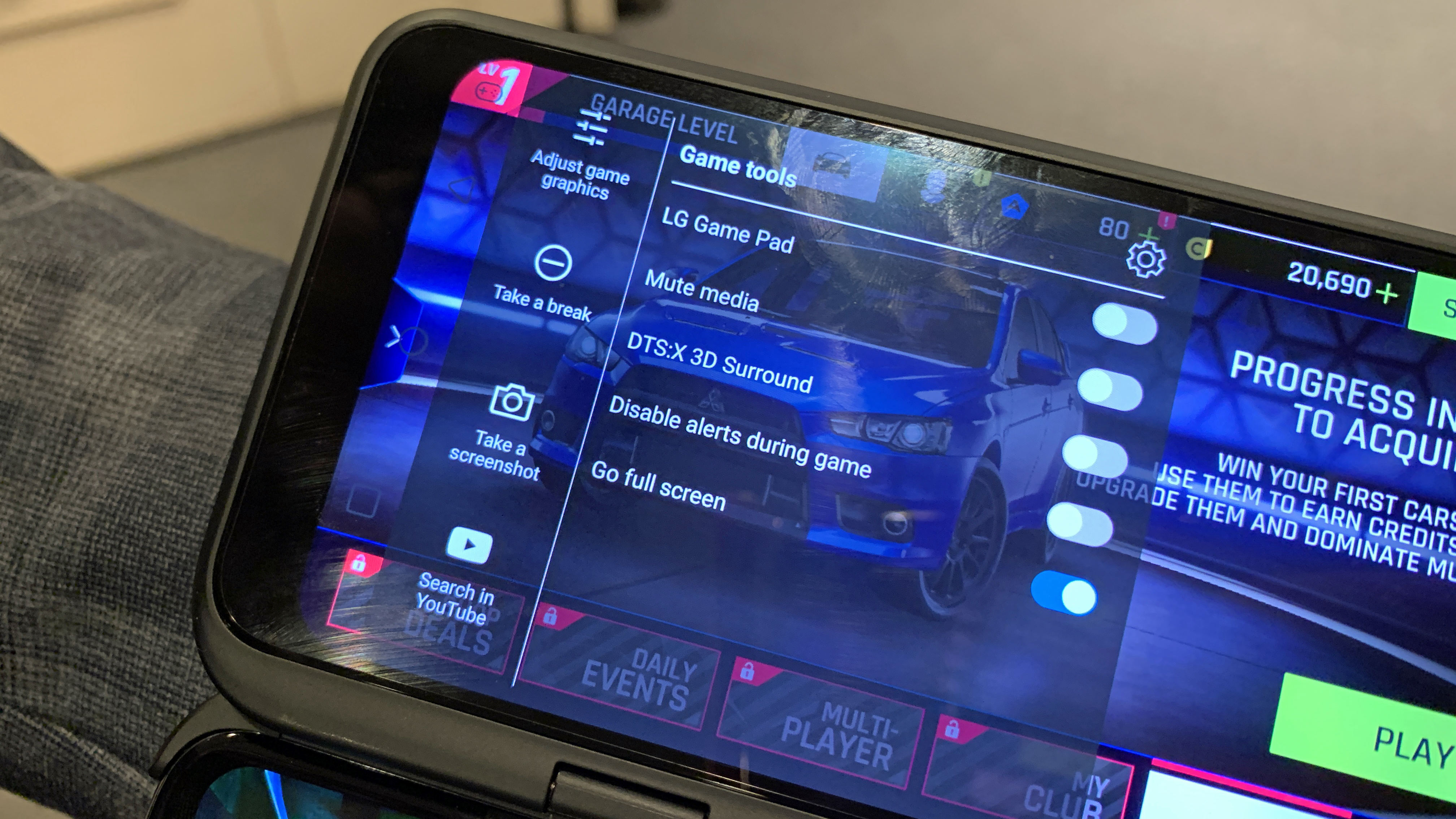 The LG DualScreen shows promise. It feels like something that needed to be made to convince users that there’s something innovative in the pipeline, worth waiting for and spending a little more for. It’s certainly a boon for the LG V50’s innovation reputation, if nothing else.

The overall effect could have been more premium though, and it would have been wonderful if LG had made more easy-to-use features. Like its phones, it’s the interface that gets in the way the most, with the DualScreen not acting in the way you might expect and packing some fat bezels too.

We’re still waiting for the price to really deliver a verdict here, but we don’t expect it to be cheap and it’s hard to see how many people really want something like this at the moment, especially when foldable phones are drawing the eye so much.