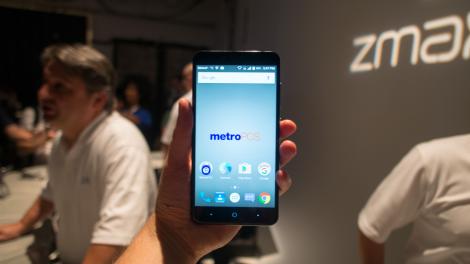 ZTE Z Max Pro is the latest sign that Chinese phone manufacturers are continuing to close the specs gap between mid-range and high-end smartphones in 2016.

It’s a $99 (after an instant rebate that will always be available) Android Marshmallow phone with surprising specs, including a rear fingerprint sensor and a 6-inch Full HD display.

The phone is also outfitted with a 13MP rear camera, a 5MP front-facing camera, a Snapdragon 617 octa-core processor. The CPU runs at speed of 1.5GHz and has 2GB of RAM.

It has 32GB of internal storage and, in case that’s not enough, a microSD card slot. It’s also been upgraded to the USB Type-C, ditching micro USB port in a mid-range phone.

ZTE Z Max Pro goes on sale in August and is currently exclusive to MetroPCS in the US. But as a GSM phone, there’s a chance it’ll launch on other US carriers like AT&T and T-Mobile in the future.

Of course, ZTE wants everyone to know the time is now to get the phone: the first 5,000 pre-orders get a free leather case. Stay tuned for more performance updates on the ZTE Z Max Pro.