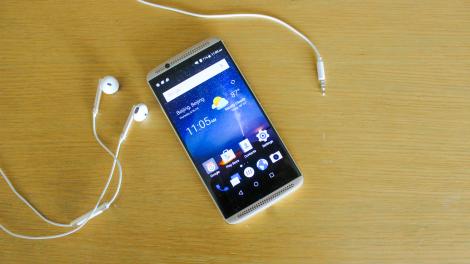 ZTE Axon 7 is an Android phone with a slick design, powerful specs and reasonable price that challenges the Samsung Galaxy S7 and forthcoming iPhone 7 in a dual SIM, unlocked form.

That explains the confusing name of this successor to the ZTE Axon Pro (ZTE Axon Elite in the UK) when we haven’t gotten a ZTE Axon 2 through ZTE Axon 6 in between last year and now.

The Chinese phone maker is ambitiously trying to compete with the flagship manufacturers from the US and South Korea, so much so that it designed the phone outside of China, in the US.

What we end up with is the a Android Marshmallow smartphone with the polished metal design, 2K display, front-facing speakers and software customizations of a more expensive handset.

Does that means it’s a reasonable candidate for TechRadar’s best phones list? I’ll continue to test it out – with a detailed ZTE Axon 7 battery life tests to come – but here’s what I found so far.

We’re about 30 days out from the ZTE Axon 7 release date, given the fact that the Chinese launch event is today and it’s estimated to be coming to the US a month later.

A UK launch for the Axon 7 is planned at a later date, and its name won’t change this time. ZTE said that it sees the value in making a global, unified push for its 2016 flagship phone.

You’ll have to buy this phone unlocked on Amazon or another retailer at full price. It won’t be sold at US carriers like AT&T, T-Mobile, Verizon or Sprint.

And while it has enough bands to support all US phone networks, it’ll work with AT&T and T-Mobile SIM cards for now. Verizon and Sprint compatibility is due “possibly later in the year.”

All of this contrasts with the 32GB Samsung Galaxy S7 at $650 and 16GB iPhone 6S at $750. That 16GB iPhone is no longer acceptable for a comparison when the Axon 7 comes with 64GB as standard.

ZTE Axon 7 is the grown up version of last year’s ZTE Axon Pro thanks to its all-metal design and considerably less chunk. It’s ready to compete with Samsung, LG and Apple.

I can hold it in one hand, but with dimensions of 151.8mm x 75mm x 7.8mm and a slippery aluminum design, I found myself struggling to reach for the corners without resorting to two.

What ZTE did nicely on the front is it maximized the real estate for its 5.5-inch display thanks to an edge-to-edge screen. It’s just the 2K display and awesome-sounding dual-front facing speakers and a front-facing camera.

You won’t find a fingerprint-sensing home button taking up space on the front. Instead, the home button is on-screen (like Google and LG do it), while the sensor is elegantantly embossed on back.

It’s easy to reach the fingerprint sensor on a phone of this size (easier than I found it to be on the taller Nexus 6P) and it’s as fast and accurate as its top competition.

ZTE also resisted the temptation of stamping its logo on the front of the device, favoring the back. It creates a cleaner look all around.

So far, I’ve been able to play with the ZTE Axon 7 in an Ion Gold color. In the future, the company plans to launch a Quartz Silver color, too.

The ZTE Axon 7 display is 5.5 inches with a 2560 x 1440p quad HD resolution. It’s the same in that regard to last year’s Axon, but different in that it’s an AMOLED display instead of an LCD.

That may not seem like a big deal at first, but it the color pops more on this screen and it could have longer lasting battery life as a result. I’m still putting the battery through its mAh paces.

ZTE didn’t go as far as to include an always-on screen, which Samsung and LG unveiled with the S7 and LG G5, but the 2K display shines brightly (even outdoors) once it’s on.

The Axon 7 screen is really being set up to not only look good on the phone, but to support VR. There’s a ZTE VR headset coming (another Samsung Gear VR clone, just like Huawei VR) and it’s been future-proofed for Google DayDream.

It also doesn’t hurt that the company put together a nice selection of wallpaper that really lets the lock screen pop – it’s scrollable and randomized by default.

I really can’t understand phone makers who stop short on presenting a vibrant set of default wallpapers when you boot up a phone (read: LG G5) for the first time. ZTE sells it.

The ZTE Axon 7 doesn’t just resemble an Samsung or Apple handset on the outside, the inside is also able to compete with much of the same internals despite its fair price.

The big differences between the ZTE Axon 7 and these phones is in storage. The Axon 7 has 64GB of internal storage, which beats double the 32GB standard from its Android competitors.

It also has expandable storage with a microSD card, but if you’re not using that you can always use the second slot for a second SIM card thanks to dual SIM card support. And yes, that’s coming to the US and UK models.

Performance has been snappy so far, and I haven’t felt it overheat compared to the Snapdragon 810 processor found inside the ZTE Axon Pro.

I’ll be running Geekbench 3 scores to determine the speed of the processor and the Adreno 530 graphics chip when under more pressure.

Of course, since the launch is happening in ZTE’s home country, the Google Play Store doesn’t work well enough in China to complete these benchmarks. Stand by when I cross the border.

Even though Google and Google services are hard to access in China, ZTE has a good working relationship with the search engine giant, so ZTE Axon 7 is running Android 6.0.1 Marshmallow out of the box, don’t worry.

The No. 1 feature consumers continue demand from new phones is better battery life, and the ZTE Axon capacity has increased beyond last year’s 3,000mAh ceiling.

It’s 3,250mAh, though I have to run more battery life tests to nail down just how well it performs in conjunction with its near-stock Android operating system overlay.

However, I’m so far pleased with the day-plus battery life I’ve been getting from the ZTE Axon 7, based on my experience with running the screen and its dual-front-facing speakers regularly.

Yes, it’s battery is mightier than the Samsung Galaxy S7, but the numbers don’t tell the entire story. A lot of it has to do with the software and battery saving mode behind a phone.

I’m also confident that the ZTE Axon 7 camera will be able to go pixel-to-pixel with phones in its price range (specifically the similarly priced Huawei-made Google Nexus 6P).

The 20MP camera, its F1.8 lens and optical image stabilization (OIS) put it in a class with most 2016 Android phones that give me a better picture than my iPhone 6S Plus in most scenarios.

It’s really hard to continue to carry around my iPhone when phones like ZTE Axon 7 take better pictures. Both have OIS and dual LED flash flash and live photos now.

Yes, Axon 7’s photos tend to be more saturated compared to Apple’s iSight camera, and ZTE’s 8MP front-facing camera is good, but it needs HDR to work its magic here. But the color and contrast in rear-facing photos really pop on the 2K screen.

I’ll have to dig into the camera and also its video capabilties, then will pit it against the Samsung Galaxy S7, iPhone 6S Plus, LG G5 and Nexus 6P, all of which have OIS.

I liked the ZTE Axon Pro a year ago, but gave it 3.5 stars out of 5 because there was room for improvement, even with its cheaper price. ZTE listened to many of my complaints.

The Axon 7 pushes out the plastic caps at the top and bottom in favor of an all-metal unibody design. Its sleek and elegant in my hand, even if it still takes two to operating the phone. I also complained about the lack of expandable storage. The ZTE Axon not only includes a microSD card slot, it turns it into a dual SIM slot if you’re not using it.

Axon 7 is a big step up for audiophiles with Hi-Fi and front-facing speakers that sound much better than the iPhone and Androids with a single speaker grill on the back or at the bottom. The sound is definitely a highlight of this phone, and it’s evidenced by the clean front that focuses on the 5.5-inch display and speakers. The fingerprint sensor is wisely moved to the back.

There’s still a bunch more testing to do, including proper battery, camera and benchmark tests to really challenge those specs. Stand by for more updates to this ongoing ZTE Axon 7 review, as I escape China and put all of Google Play apps to the test on it.