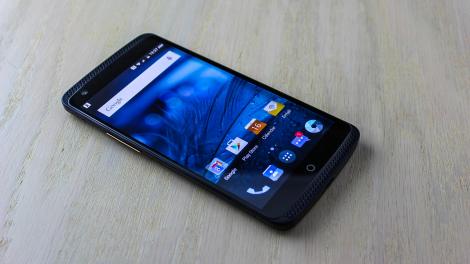 This Android 5.0 Lollipop handset, teased for a month with mysterious marketing campaign, is part of the Chinese manufacturer’s “plan to define an affordable premium handset.”

“Affordable” and “premium” are typically polar opposites in the world of smartphones, but ZTE is striving to make an inexpensive metal phablet that has a 5.5-inch display.

It costs less than many of today’s Android flagships, and we got a chance to test out its specs and design before it’s delivered to its unlocked customers later this month.

ZTE did a solid job at ensuring the Axon didn’t leak ahead of this month’s announcement. That doesn’t mean the phone is conceptual or far off, however.

The official Axon release date is late July, with retailers promising to deliver by July 28. Pre-orders began on July 14 on sites like Amazon, eBay and Newegg.

Don’t expect this particular ZTE handset to show up in carrier stores like AT&T, Verizon, Sprint and T-Mobile. It’s an unlocked 4G LTE phone without US carrier subsidies. Word of mouth is how this phone is going to sell itself.

ZTE Axon costs $449.98, which is unsurprisingly lower than most high-end flagship phones that the company is trying to live up to.

Compare that to the $600 LG G4 and Samsung Galaxy S6, or the even pricier $650 iPhone 6 when they’re bought unlocked, and it seems like a good deal.

ZTE Axon’s price is sandwiched in between these high-end rivals that are often deceivingly priced with smaller upfront costs but higher monthly plans, and low-end unlocked plastic handsets like the Alcatel OneTouch Idol 3, Asus Zenfone 2 and OnePlus One.

The ZTE Axon specs seems to back up the company’s intentions of delivering a premium device at an affordable price, though I’ll wait for proper benchmarking in a final review on Monday.

It boasts a 5.5-inch LCD display with a quad HD resolution of 2560 x 1440 and 534 pixels per inch. That’s the same size and resolution as the LG G4, though the LCD tech behind them is slightly different.

Underneath the Gorilla Glass 3-protected display is a Qualcomm Snapdragon 810 octa-core processor clocked at 2.0 GHz Octa-Core. That’s the same chip in the LG G Flex 2 and HTC One M9.

Axon’s performance is unlikely to be hindered by its memory thanks to a high-ceiling 4GB RAM, like the Asus Zenfone 2. It also has 32GB of storage space, but no microSD card slot.

It feels solid in the hand with a weight of 6.10 oz (175 g). Some people prefer a weightier phone (read: HTC owners), and that’s exactly what you get thanks to the aluminum design.

The phone, with a non-removable back, comes in three colors: Chromium Silver, Ion Gold and Phthalo Blue. Even the blue has a bit of gold on the buttons and around the camera.

All phone manufacturers should focus on developing the best camera within their budget, and that’s something the ZTE Axon promises.

It features a dual lens 13-megapixel camera in back, sort of like the HTC One M8. It lets you quick auto focus and has the ability to refocus later on in post. Shooting 4K video is also possible.

The front-facing “selfie” camera is two megapixels and shoots 1080p video. I’ll update this review with a complete camera test and performance benchmarks closer to the ZTE Axon release date.

When the ZTE Axon launch happens, you should be able to simply plug in your AT&T or T-Mobile nano SIM card into the phone and be up and running.

It’s a GSM smartphone with 4G LTE bands, so isn’t compatible with Verizon and Sprint’s CDMA networks. Luckily, one of T-Mobile’s latest deals will pay your early termination fee from another carrier if you switch.

Bonus: If you order the phone right now, ZTE is throwing in JBL E13 headphones for free.

The ZTE Axon takes cues from several higher-end phones: LG G4’s 5.5-inch display, Asus Zenfone 2’s 4GB of RAM and an iPhone-like aluminum design complete with classy tones. It also has a quad HD display like half of the phablets out there.

The price is what puts the Axon phone in an interesting place. At $449.98, it costs much less than these flagships, yet it’s more expensive than other unlocked phones – which are usually made of plastic.

That begs the question: Are you interested enough in a new phone to pay up for a metal body and solid specs, yet not willing to fork over any more for a name-brand device from Apple or Samsung? This review will be updated to make answering that all-important question even easier on Monday.