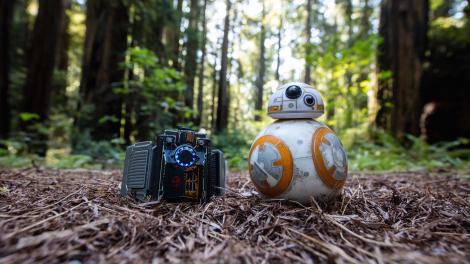 BB-8, the lovable spherical droid from Star Wars Episode VII: The Force Awakens, stole our hearts the moment we saw him on stage at the Star Wars Celebration in 2015. He had the chutzpah of R2-D2 but came in a more portable, technologically impressive package.

OK, he’s a rolling sphere – but still – it’s hard not to love him all the same.

We wanted one. And we were willing to risk a lifetime of lawsuits in order to get one – even if that meant sneaking onto the set of the next Star Wars film to get one of our own.

Thankfully, Sphero (formerly known as Orbotix), a startup electronics firm that shot to fame off the back of its first remote-controlled robot toy that goes by the same name, created a miniature BB-8 version of their toy. And it was love all over again.

It could react to its environment through a number of emotion-packed bleeps and bloops, display short visual messages from R2-D2 and C-3P0 or simply be let loose to explore its surroundings on its own volition.

We thought we had it all, but this month Sphero showed up with a new version of BB-8, one that could be controlled via a wearable that it called the Force Band.

Strap on the Force Band and you can control BB-8 through hand gestures – push the air to send him rocketing forward, twist your wrist to turn his head or pull him back by raising your arm to your chest Darth Vader-style.

To go along with the release of the Band and special edition battle-worn BB-8, Sphero is also updating the BB-8 app on iOS and Android to enable all sorts of new experiences that will excite wizened Jedi Knights and novice Padawans alike.

May the force be with you, always

At some point we’ll need to talk technical specs – how to get the BB-8 Sphero up and rolling around, what the app is like and how much this little novelty is going to set you back – but first let’s talk about how magical it is to actually use your hand to control an object from the Star Wars universe.

Now, there have been any number of children’s toys in the past that have allowed you some semblance of control, but few of them live up to the joy you’ll experience while using BB-8 and hearing Obi-Wan’s voice as he explains your menu options.

Movement, as I explained earlier, is all processed by the gyroscope and accelerometer inside the Band itself, which can be worn on either wrist. The Band understands four commands – move away from you, move towards you, rotate and stop all together. Four is a bit limited, sure, but it’s enough to get the job done.

Now all of this comes with a caveat: mastering the Force Band isn’t easy. A few months back, Sphero released a short clip of a Hayden Christensen look alike playing with the toy, making it seem like controlling the droid is as intuitive as letting the force flow through you. Unfortunately, it’s a bit harder than that. It took about two hours for me to really get the hang out it, and even now I doubt I could guide it through Beggar’s Canyon without running into a Womp Rat or two. (That’s a Star Wars reference, not a legitimate claim, by the way.)

The problem, I think, lies with the gyroscope and accelerometer – they seem just tuned enough to get the job done but aren’t anywhere near as accurate as they could be.

Still, despite a steep learning curve and a few mishaps while guiding BB-8 around the room, using the Force Band is a fun gimmick that re-invigorated my force-attuned heart.

The app opens with a familiar Star Wars theme tune while it pairs to the droid via Bluetooth and though the initial setup takes a little longer than expected – the app actually loads BB-8’s orientation data from the droid itself – the connection was stable.

Once downloaded and paired with your device there is a menu screen with four old options – Drive, Message, Patrol and Settings – and a few new ones that work exclusively with the Band like Force Training, Force Awareness and Combat Training.

Drive is borrowed from the standard Sphero app and requires you to hold your phone in landscape mode while you control BB-8’s movement with your left hand – it’s not as fun to use as the Force Band, but it’s a heck of a lot more practical.

On the other hand, if you feel like having BB-8 zip around the house but aren’t in the mood to actually control the droid yourself, the Patrol feature gives BB-8 a mind of it’s own.

The other modes – Force Training, Force Awareness and Combat Training – use the Force Band and will be available when the wearable launches later this month.

So how long can you expect to spend with BB-8 before it needs to top off on its rebel base? (It actually comes with a Star Wars-themed charging dock, which is pretty neat.)

Three hours of charging will give you a full hour of play-time, but even in its cradle BB-8 will be beeping, squeaking and bobbing its head around as though it’s eager to get out and roll around, making it one of the neatest – if one of the most expensive – items on your desk.

The sound effects BB-8 makes are just one of the many details that Sphero got so right about the little droid. The side decals are artfully crafted and the mannerisms that BB-8 makes while just trolling around the house are nearly identical to the ones you’ve seen in movie theaters.

It’s attention to details – the muppets that appear from time to time in the sand of Tatooine; the holographic monsters in the game of Holochess (it’s actually called Dejarick, by the way); and entrancing, otherworldly cantina music – that made the film so memorable, so it’s nice to see that same level of attention given to Sphero’s BB-8.

The holographic AR messaging, automatic robotic mode and the cute mannerisms of BB-8 made our first impression of this little droid an overwhelmingly good one, and now the addition of the Force Band has only made us fall more deeply in love with the little guy.

Of course, we wish the battery life was just a hair longer and the learning curve a bit less steep, but for the sticker price we’re blown away with the natural evolution (and perfect product tie-in) that Sphero has created for itself.