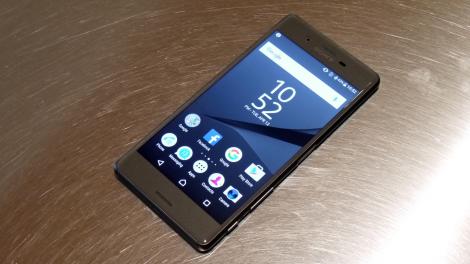 Update: We now have the Sony Xperia X in our hands ready for our full review. Keep your eyes peeled to see our full verdict on Sony’s latest flagship in the coming days.

The Sony Xperia X is a curious device. I say curious because I don’t really know what kind of phone it is.

I could look at the CPU used, the screen size and resolution and the intended market – but based on what Sony’s telling me, the first two points aren’t really relevant and there’s no information on which sort of buyer the Xperia X is aimed at.

It’s very much a Sony phone though, stuffed to the brim with components from all departments in the company: screen tech from Bravia, audio from the Hi-Res Audio workers and the DSLR team working in tandem with the smartphone guys to make a compelling spec list.

But given we’ve been waiting for the Xperia Z6, the all new flagship, for ages it’s hard to know if this is the new phone or just a side-range that sits alongside the Xperia Z choices – and given Sony doesn’t seem to know the answer to this question – or just isn’t telling me – it’s hard to gauge.

The Xperia X is a phone that, as shown by the spec list below, is dripping with Sony heritage. Coming with a 5-inch Full HD screen, it sits within the same industrial-style design that the previous handsets have used.

It’s something of a shame really – and that’s not to say there’s anything wrong with what’s been put together here. No, the front glass is strong and slightly curved at the sides, the back is all metal and the sides, while plastic, really fold into the chassis well.

No, it’s a shame because this is meant to be a new chapter for Sony, and that was a chance to rip up what it’s done before and start with a blank slate, a phone design that starts a new direction and maybe appeals to a new set of consumers.

There’s still the same lozenge power button on the side, which doubles as the power key, and as the phone isn’t water resistant this time around doesn’t have extra flaps to cover the charging port, which lives at the bottom (and sadly isn’t USB Type-C, which Sony tells me is just a timing issue from when it created the phone).

The smaller screen is still sharp and vivid and the 5-inch form factor slides into the hand pretty well, although it’s not a patch on the beautiful edge-to-edge display of the Xperia XA, which is curiously cheaper than the more well-specified X.

The power under the hood comes from the new-but-mid-range Snapdragon 650 CPU from Qualcomm, and combined with 3GB RAM is a decent enough combination of battery-saving and grunt to run the phone.

That said, the Xperia X didn’t like taking a lot of large (23MP) photos in a row, as it began to slow down rapidly after that. I’ll give this a pass though, as I’m among the first in the world to get a hands on experience with this phone and it’s very much early software – and camera speed optimisation is one of the first to improve.

The camera is clearly the big hitter on the Xperia X, the only part of the phone that’s higher-spec than the previous Xperia Z5. It’s the same 23MP camera, but with Predictive Hybrid autofocus.

What those overly complicated words mean is that the phone can go from sleep to tracking an object in space very, very quickly – the tests we did showing the camera could go from sleeping to taking a picture in 0.6 seconds were indeed proved true.

It doesn’t mean you’ll get a GREAT picture, as you’re pretty much guessing at the framing of the shot, but it’s a nifty ability if you’re rushing to get a snap of your child pulling over the laundry bin or your dog doing something hound-like – you know, the usual stuff the human race is obsessed with.

There’s still some tidying up to do on the camera, as some of my test shots weren’t amazing – but then again, some were. Sony’s attitude seems to be that it recognises what it’s missed with the camera in the past, and is looking to make the phone more user-friendly to get great shots from without having to mess around with the professional settings.

The battery life on the Xperia X should also last longer – not just in terms of time between charges, but also the length of time before your battery becomes so awful that you need change your phone.

That’s another way to get around the lack of removable battery that some smartphone fans still clamour for (although microSD card is supported).

The system works by constantly monitoring the charge going into the battery and then making sure the phone is completely removed from the charging while the wall outlet is still plugged in. I obviously couldn’t test this yet, but a long time shooting with the phone for an afternoon didn’t make anywhere near the dent in the battery performance that I was expecting.

There are some other decent features as well, from the smoother lock screen to the continued use of Hi-Res Audio. I don’t understand why the brand has given up on water resistance, one of its key selling points, though.

The overall ethos of Sony’s new Xperia X range is yet to be defined – after all, this isn’t even the first X smartphone from Sony, as the Sony Ericsson Xperia X10 was actually the first to bear the moniker and was very much a flagship device (although it was NOT a great phone…) but it’s hard to see who this is aimed at.

The Sony Xperia X is a phone that’s just crying out for an identity to hold onto; a cheap price, a superb build quality, a stunning screen, and it has none of those things. At first glance it’s a slightly different Xperia Z with lower spec.

But dig a little bit deeper and you’ll see a phone that’s wanted to come out and play for a while, but it couldn’t because the other kids in school were having none of it. Then it grew up and got much better looking BECAUSE it was alternative, and suddenly the world was very much interested in what this handsome hunk of tech has to say.

The price of £459 in the UK is confusing, as it seems to suggest the Xperia X is going to be a flagship phone, one that’s worthy of taking the Z’s place at the head of the line.

The camera is great, the audio strong and the battery has potential – but I still think we should have seen a new design ethos from Sony when the new phones came out. Then again, I’ve been banging that drum for years – maybe it’s time to admit this is just what Sony does to its phones.

Either way though, the Xperia X needs the ‘why should I buy it?’ answer when in your local phone shop choosing between the reams of options, and I can’t think of anything amazing off the top of my head – just very good elements.