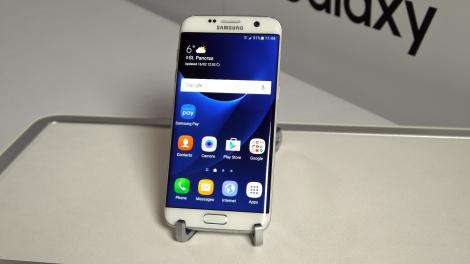 The Samsung Galaxy S7 Edge is a phone that impresses the second you pick it up, evoking feelings similar to those we experienced the first time we fondled HTC’s One M8, one of the best-looking phones on the market.

Where the ‘normal’ Galaxy S7 is far too similar to the previous year’s model, the S7 Edge takes a surprisingly successful smartphone in the S6 Edge and adds in some decent changes to make it worthy of the upgrade.

The changes are almost entirely cosmetic (apart from some welcome changes to the camera and battery); but given you’ll be using this phone tens, if not hundreds, of times a day, the way it feels in the hand is hugely important.

The main difference is on the back of the phone. The Galaxy Note 5 was the first Samsung phone to use the new curved back, and that’s been improved on the S7 Edge. The result is a smart, glossy phone that sits in the hand like a polished pebble, begging you to spin it around and enjoy the lack of sharp edges that were present on the S6 Edge and S6 Edge+.

The reason I’ve compared it to both of the above is that the S7 Edge sits somewhere in between them in terms of spec. The QHD Super AMOLED screen is back once again – not an upgrade, but then Samsung had already crammed in too many pixels, so the sharpness is excellent and capable of dealing with nearly any content on the web and rendering it well.

Check out our hands-on and first impressions Galaxy S7 video:

But the screen has been extended to 5.5 inches, up from the 5.1-inch display on the smaller screen on the S6 Edge, and slightly under the 5.7-inch choice on the Edge+. However, what’s impressive is that Samsung has managed to make the new S7 Edge not feel much larger than the smaller of the two devices mentioned, despite the big increase in screen area.

Don’t go thinking that this is a small phone though, as it’s still rather large in the hand – we’re well into what would have been called phablet territory just a couple of years ago, and given that I’ve come to this right from using the Huawei Mate 8 for a couple of weeks (and could have tricked my hands into thinking massive phones are fine), there’s every chance you’ll pick it up and won’t be able to imagine using it every day.

The screen is also worth talking about here. Yes, it’s still the same curved display as last year, but the curves disappear further around the side of the S7 Edge, with less bezel to see, which gives an even more immersive feel to the phone than before.

The effect is the same as on the S6 Edge – it’s a nice novelty to have, and makes the phone look wonderful when sat on its side, but in reality it doesn’t add a huge amount of functionality.

That said, it seems enough people were impressed with last year’s model to want to buy it, so improving this element seems like a smart move.

Thankfully, Samsung isn’t making a big deal of the edge display when the screen is turned off, as it was a completely useless feature of the S6 Edge – you needed to rub the screen almost erotically at the side when the screen was off, and hope that it might show you the time and weather.

The edge display has been upgraded now though, with more features added to the interface to make it more useful.

You’ve now got double-width information when swiping in from the side of the screen, giving you updates on your friends, football scores, news and even a compass and torch option as well.

These features are coming to last year’s S6 Edge duo as well, so it’s not going to be a headline feature, but it’s easy to swipe into, and adds to the sheen of the curved display.

Like the Galaxy S7, there’s another big feature coming to the Edge: an always-on display. The clue is in the name: the screen will be on permanently to show off the time, a calendar or just a general pattern to make the phone look more premium. It does do that, and it looks really slick, but in reality this feels like more of a gimmick.

Sure, having the phone on your desk means you can glance at the time without having to touch the phone, but it feels like a time-saving feature too far.

It’ll also come at the cost of about 15% battery life over an 18 hour day (according to Samsung, which has promised that the always-on display will consume less than 1% per hour), so it’s a feature you’ll need to really think about using.

Battery life on the Galaxy S6 Edge was utterly confusing: it blitzed all of our tests, such as standby, gaming, movie watching and more, and yet would struggle to last a whole day in the pocket, performing rather terribly.

Where the S6 Edge had a 2600mAh battery, Samsung’s crammed a load more juice into the S7 Edge to boost it up to 3600mAh, giving it a very good chance of being much more usable. Combine that with Android 6 Marshmallow’s new Doze mode and this could finally be a Samsung phone with a decent battery life.

I’m not holding my breath – Samsung always makes the right noises about battery life and hasn’t really delivered in the past – but at least it’s massively upped the capacity this year.

In terms of interface, the Galaxy S7 Edge is very similar to last year, but once again it’s refined the UI to make everything flatter, cleaner and, well, more Google-y. It’s taking the Marshmallow design language and used it to strip back Touchwiz (its proprietary overlay on top of Android) even more, which is going to please a lot of fans.

It skips around pleasingly under the finger, and while it still has the extra flourishes in places like the notification shade, it doesn’t get in the way.

Talking of things Galaxy fans will love: the microSD slot has returned. It’s located in the SIM tray at the top of the phone, so you’ll need a tool to get it in and out, but Samsung believes it’s finally got the performance to the point where a memory card won’t slow the phone right down.

Confusingly, the S7 Edge doesn’t use Google’s new Adoptable Storage function, which enables you to integrate the microSD card into the internal storage. This in turn enables you to install apps to it, saving a load of space, but for some reason Samsung has dropped it here, which seems like a missed trick.

The camera on the new Edge is in the same league as the one on the ‘regular’ S7 – a 12MP sensor with improved low light capabilities.

This might look like a climb-down from the excellent 16MP camera we saw in the S6 duo last year, but in reality it’s a smart move. We don’t need that much sharpness, and by dropping the resolution Samsung can cram in even more functionality.

The first example of that extra functionality is something it seems even Samsung doesn’t even know the name of. The technology is called Dual Photo Diode, or Dual Pixel Sensor – Samsung described this as the same as having two eyes to work out the distance to an object and help focus to bring it into sharpness, a DLSR technology that’s been brought to smartphones.

It’s hard to know whether this is making a real difference on the Galaxy S7 Edge based on the explanation of the technology, but it certainly delivers sharp images. Holding the phone steady for even a few milliseconds brings the picture in to sharp focus, and while it won’t manage to capture split-second moments in a hurricane, it’s pretty impressive.

The low light capabilities Samsung was extolling also seem to stack up, even on the early build we were playing with. The images look bright even with shadows all around, and with the addition of the Pro mode introduced with the S6 an S6 Edge, you’ll be able to play with your snaps to get them just how you like before taking the picture.

I’m looking forward to trying out the Galaxy S7 Edge in our full review, as that drop in megapixel count could harm the photos; but given that HTC managed to get great pics with a 4MP sensor, using that extra brightness, I’m hopeful that Samsung has got the mix right here.

The other big feature being pushed here is Game Launcher, a separate area to store all your games on the phone to imbue them with special powers. For instance, add Real Racing 3 to the folder and you’ll get a small Game Tools icon that sits in the corner.

Tap this and you’ll be able to disable messages and calls, lock the buttons (to prevent annoying mis-pressing), minimize the game to check other parts of the phone, or record / screengrab your achievements to share online.

It’s a pretty complete suite for improving the gaming experience on the Galaxy S7 Edge, and you can even lower the resolution and performance of the game to improve battery consumption on some of the less graphically-intensive titles you’ve got installed on the phone.

The Samsung Galaxy S7 Edge is a phone that I didn’t expect to see from Samsung, a device that takes the special sauce from last year and improves on it in a number of ways.

It’s hard for phone brands to keep changing the way their handsets look year on year, but unfortunately that’s what consumers demand, showing them that they’re getting real value for money when spending a huge chunk of their paycheck to buy the latest smartphone.

To that end, making the Galaxy S7 Edge bigger while feeling better in the hand, and adding an improved camera and (hopefully) longer battery life makes a lot of sense, delivering a real upgrade on last year’s model.

Where the Galaxy S7 looks very similar to the S6, the Galaxy S7 Edge takes the DNA of the S6 Edge and refines it in a very attractive way.