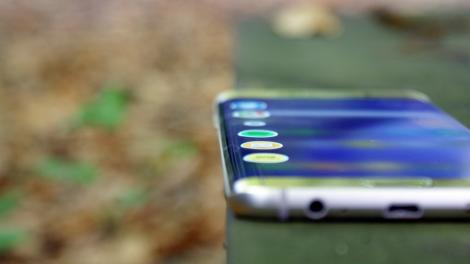 Update: We’re really close to publishing our new Galaxy S6 Edge+ review – in the (short) mean time here are some of our, frankly lovely, pictures of the new phone in action.

Let’s be clear about one thing with this phone: the Samsung Galaxy S6 Edge+ is a big Galaxy S6 Edge. There’s not a lot to choose between the two devices beyond the size.

The obvious change is to the screen, with a 5.7-inch choice rather than the 5.1-inch option on the smaller S6 Edge. However, internally it’s almost identical, with 4GB of RAM the only real difference.

That means there’s sadly no microSD slot again, the Exynos octa-core chipset lives on and there are only 32GB or 64GB options to choose from.

What’s interesting too is that this phone is a replacement for the Note range in the UK and other key markets – almost like an admission from Samsung that having the S Pen and its associated fancy extra bits doesn’t go down well in some territories.

The price hasn’t been announced, but I’m pretty sure it will be over £600 (around $930 / AU$1275) as per usual when Samsung’s high-end phablet range comes out – however as the S6 Edge+ doesn’t have the stylus it can’t be classed as a Note.

But just because it’s a bigger version of another phone, that’s no bad thing. The S6 Edge was (and is) a brilliant device and making it larger actually helps make it more attractive in many ways.

The screen is still QHD (2560 x 1440) but doesn’t feel low res at all (despite being lower in the pixels per inch stakes compared to the original due to being stretched out to fill a bigger display).

The other big change on offer is the edges are being used more effectively. When I heard rumour of this phone, I assumed it was going to be the Galaxy Note Edge from 2014 rebooted to have two edges that could be stroked and manipulated… and therefore made more useful.

But that’s not the case here, with the same effect of the screen softly sliding away on either side of the phone.

The people tab, available by swiping in from the side, is still there, and now has new powers to let you poke or tap or do other odd things to other Edge owners. That’s right, other Edge owners only – you’re going to be sorely limited in being able to use these weird new features to play with your pals.

Swipe again though and you get a list of the most-used apps within easy reach. Samsung should just do away with the unused people list and go straight for the apps, or have one on each side of the screen, though.

But there’s no such luck here, so we’re going to have to wait for more functionality to come to the sides of the Galaxy S6 Edge+ screen… and Samsung promises something is coming.

Another big change with the S6 Edge+ is the heralding of Samsung Pay, letting you buy stuff with your phone. A simple swipe up from the bottom of the screen (even with the display off) will bring up your cards, and then you can tap your device onto the reader.

It’s a very slick system, and being able to actually pay for things using contactless payments even without an NFC terminal (using the magnetic card reader) is a brilliant way of doing things.

The camera on the S6 Edge+ isn’t anything to get that excited about, as it’s largely the same as that on the S6 Edge. Actually, that’s pretty harsh, as the camera on that and its S6 brother is brilliant -it’s just there’s not a lot extra to play with.

There’s nothing to suggest the S6 Edge+’s snapper will be any different, with a speedy opening of the app with the double tap of the home button and all the practice snaps looking clear and in focus.

There are SOME extra elements on here, but nothing massive: RAW support is included for pro mode, and live streaming over YouTube is enabled too. The latter is a little long to set up, with sharing taking place via a text message – but once that missive is sent, the user can simply follow your footage through a private video channel.

I’m quizzing Samsung on whether these features are coming to the older S6 phones – I’m sure they will, but there seems to be a question of whether they’ve got enough RAM to achieve streaming.

Given Sony’s managed to stream YouTube video fine with the Xperia Z3, and Nokia baked RAW support into its phones ages ago, I can’t see why it would be an issue.

The battery life of the Samsung Galaxy S6 Edge+ is going to – hopefully – be a lot better than that seen on the original S6 Edge, for a couple of reasons.

Firstly, this is a much bigger battery pack, at 3000mAh, and while it’s got a larger screen to power, there are the same amount of pixels, so fingers crossed that will result in improved power management.

Google is also doling out an update to Android that should help fix some of the battery woes afflicting many of the top-end phones at the moment, and while the S6 Edge+ is on Android 5.1.1, that should be upgraded pretty soon.

The battery life is still a worry though – for a phablet, that’s a small battery pack. Like I said, it’ll probably be fine, but with a phablet to play with it seems a shame to waste the opportunity to push in more mAh.

Is the Samsung Galaxy S6 Edge+ the phone I expected to see? Not at all. Not only is it unlike Samsung to take its top end phone and just make it larger (although if it’s good enough for Apple, eh…?) it’s especially atypical to use that phone to replace the Note range.

The Galaxy Note 5 is still being released, and seems like it might make it to the UK at some point if the rumours are to be believed, but it won’t be at launch sadly.

And there’s no way the S6 Edge+ can use the S Pen as the screen isn’t set up in the same way to use the inductive technology, so anyone in the UK that was looking forward to getting their hands on the raw power upgrade the Note 5 would bring is sadly out of luck,

Still, this is a lovely phone to hold and use, has oodles of power and a beautiful screen, and if you’re simply after a bigger-screen experience, it ticks the boxes nicely.