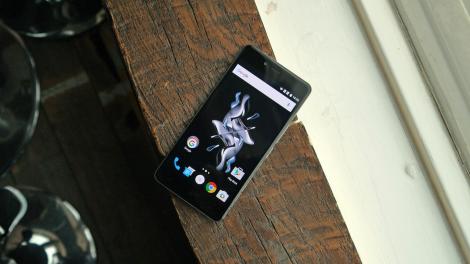 OnePlus is expanding its range of smartphones with the OnePlus X, which slides in below the Chinese firm’s flagship OnePlus 2.

It’s a mid-tier offering with a highly reasonable price tag, aimed at encouraging those on tighter budgets, and with a stronger sense of style, to jump aboard the start-up’s bandwagon.

As I approached the handset on the stand I was struck with a certain sense of deja vu, as there’s an air of the iPhone 4 about the OnePlus X. This isn’t the first phone to be compared to an iPhone, nor will it be the last, but from a OnePlus perspective the design language is a step in the right direction.

The OnePlus X looks and feels more premium than both the OnePlus One and OnePlus 2, and I can see this design having a wider appeal with consumers.

In fact, considering the price the OnePlus X is fantastically built – it could easily pass itself off as a handset almost double the price in the design department.

At 6.9mm it’s the thinnest OnePlus handset to date, and the 5-inch display keeps the dimensions to a palm-friendly 140 x 69mm. It’s much easier to hold in one hand than its bigger brothers.

The micro cuts in the metal frame that runs around the circumference of the OnePlus X add a small amount of grip, which is handy as the glass/ceramic finish can be a little slippery.

On the right of the phone you’ll find the power/lock key positioned below the volume rocker, which in turn is below the dual nano-SIM tray.

If you don’t need two SIM cards you can put a microSD card into one of the the SIM slots, enabling you to build on the 16GB of internal storage by up to 128GB.

On the left of the OnePlus X is the alert slider, which enables you to silence the phone, switch to priority mode or allow all notifications at the slide of a switch.

One negative point on the design of the OnePlus X however: it’s an absolute fingerprint magnet. I lost track of the number of times I had to wipe the handset down, front and back, during my hands on time. It’s highly frustrating.

For the first time on a OnePlus handset, the OnePlus X sports an AMOLED screen, making for brighter, more vibrant colours.

The 5-inch screen is a comfortable size, and the full HD resolution means everything looks clean and sharp.

I do fear a little for the Snapdragon 801 processor housed inside the OnePlus X – it’s not a bad chip by any means, it’s just getting a little long in the tooth.

To be fair to the OnePlus X, though, Android 5.1.1 Lollipop felt fast and fluid during my time with the handset. Apps loaded promptly, I was able to skip through home screens without issue and it appeared to handle multitasking well.

The device I got my hands on didn’t have any of the content or apps other than what comes loaded out of the box – it’ll be interesting to see if the processor and 3GB of RAM can cope just as well when you starting filling the OnePlus X up.

OnePlus has stuck with a 13MP camera on the rear of the X, mimicking the snappers on the One and 2. It’s not an identical experience though, as OnePlus has made some improvements behind the scenes.

This includes faster auto-focus, and it performed very well during my hands on time. The snapper speed was lightning quick, enabling me to take multiple shots in rapid succession.

OnePlus has stuck with the stock Android app, so you get modes such as Beauty, HDR and Clear Image as well as Panorama and Time-Lapse, but don’t expect the volley of features and tools you find on other handsets.

From December OnePlus will introduce weekly open sales, which will initially be one-hour time slots where anyone can buy the X, but these will increase in duration as time goes on.

The OnePlus X is another solid smartphone from the Chinese firm, and it’s the best-looking yet. Factor in its surprisingly low price tag and OnePlus may well have a mid-range winner on its hands.

Trouble is you’ll still need an invite to buy one initially, which makes OnePlus’s phones frustratingly difficult to get hold of. OnePlus promises it will open up periods of general sale from December, but it still won’t be a simple matter of going online at any time and hitting ‘Buy’.

One final word of advice: you’re better off ignoring the Ceramic option. It’s more expensive and heavier, and I, along with many others at the launch event, struggled to tell it apart from the cheaper Onyx finish.