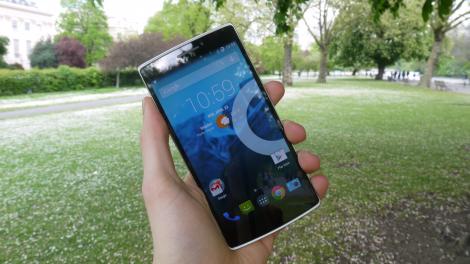 The OnePlus One is a significant milestone in the mobile industry as it’s the first smartphone to officially run the community driven CyanogenMod out the box.

CyanogenMod has been available for Android devices for a while, but it required a certain level of technical smarts to get it on a handset and that’s something many consumers simply couldn’t be bothered with.

The process was made simpler with the arrival of the Oppo N1 which plays nicely with CyanogenMod and thus allowing its owners to boot the alternative build of Android onto it.

Any worries about installing a new operating system on your handset, and potentially voiding your warranty, have been put to rest with the OnePlus One as it’s already running the modified version of Android 4.4.2 KitKat.

With a price tag of $299, £229 (around AU$320) for the 16GB “Silk White” version it’s easy to dismiss the OnePlus One as another generic mid-range Android handset destined to be lost in the noise.

That sort of thinking would be unwise though, as one quick scan of the spec list for the One tells a very different story.

The Chinese manufacturer has stuffed the OnePlus One full of impressive components, from the 2.5GHz quad-core Snapdragon 801 processor, 3GB of RAM and Adreno 330 GPU to the 13MP rear snapper and full HD display.

So while the OnePlus One will set you back less than the well priced Google Nexus 5, in terms of specs it’s lining up against the Samsung Galaxy S5, HTC One M8 and Sony Xperia Z2. These are phones double its price.

It left me wondering where corners had been cut and concessions made.

And to be honest I’m still wondering how OnePlus has managed to produce such a well specced, low cost device as my brief hands on time with the device didn’t reveal any obvious short comings.

That full HD display is 5.5 inches in size, which means the OnePlus One is larger than its flagship competition, although with dimensions of 152.9 x 75.9 x 8.9mm it’s only marginally bigger than the 5.2-inch Xperia Z2.

There’s no premium metal body in play – which is hardly a surprise considering the price – and even though there’s a noticeably plastic finish I found the OnePlus One felt nicer than the Galaxy S5, not to mention more solid too.

The plastic frame means OnePlus has been able to keep the weight of the One down, and at 160g it matches the One M8 on the scales, while showing up the 163g Xperia Z2.

To the right you’ll find the power/lock key falls nicely under your finger or thumb, while on the left there’s a volume rocker switch just below a tray for a microSIM.

OnePlus has told TechRadar that the final production model of the One will have a slightly elongated volume switch, although I still found the one on my unit to be perfectly serviceable.

It is noticeably shorter than the volume switch on the Galaxy S5, but actually longer than the one of the Z2 – although Sony has raised each end to make it easier to hit.

You get a headphone jack on top, while on the base there’s a centralized microUSB port flanked by two speaker grills in a setup which is reminiscent of the bottom of the LG G2.

In terms of bezel surrounding the 5.5-inch full HD display the OnePlus One doesn’t go too heavy, opting to have the menu, home and back Android navigation keys below instead of on screen.

The sheer length of the OnePlus One makes it a little tricky to reach all areas of the screen during one handed operation and I found I had to shuffle the device to reach the navigation keys – or employ my other hand to steady the ship.

While that may not be as defined as its Samsung, HTC and Sony rivals the display on the OnePlus One still offers up a decent viewing experience.

Images and text appear crisp and clear, although colours are a little more muted – not majorly so, but side by side there is a difference between the One and it’s higher priced competition.

The real story on the OnePlus One is the operating system.

OnePlus did note that the handset I was using wasn’t running final software and various things could change before it hits market, but my experience was still a pleasing one.

The beefy Snapdragon 801 processor provides a smooth user interface which is instantly familiar to anyone who has used Android previously.

Dig a little deeper though and CyanogenMod’s enhancements become apparent, the first of which is on the lockscreen.

You’re greeted with the familiar padlock icon in the middle of the screen, but start dragging it and you’ll note a variety of app shortcuts appear allowing you to jump straight into one of them.

The default setup is internet, phone, music and messaging, but these can be edited in the settings menu. You can even setup your own custom lockscreen with various widgets and information pulled through.

Your homescreen brings more familiar territory, although app icons have been made slightly larger and a nice addition is the ability to move the app tray icon and place it whether you want.

The position of this is locked on pretty much every other Android interface, but CyanogenMod is all about giving you greater flexibility.

Head back to the settings menu and that flexibility is most apparent with a host of new options for you to play around with.

There are various personalisation options for the homescreen, lockscreen and general interface, while other useful features such as user profiles have also been made available.

Even the notification bar can be customised. Don’t like the standard battery icon? No problem, you can get rid of it and have just the percentage left displayed or CyanogenMod’s own battery icon. It’s a smart little circle with a percentage reading in the middle, if you’re interested.

You can hide the battery icon completely if you so wish, although I don’t see the point, as well as your mobile network indicator. If you strive form a clutter free status bar you’ll love these options.

The KnockOn feature I enjoy so much on the LG G2 has been mimicked on the OnePlus One as well, allowing you to wake the phone with a double tap of the screen, and put it to sleep by tapping the notification bar. It’s simple, yet effective.

I didn’t experience any hint of slow down or lag during my hands on time with the OnePlus One, and everything from web browsing to downloading and launching applications was slick and smooth.

There’s plenty of connectivity options as well, with the OnePlus One being 4G enabled and offering Wi-Fi, Bluetooth 4.1, GPS and NFC.

You don’t get an IR blaster to control your TV with though, and with just 16GB of internal storage and no microSD slot available you may find the OnePlus One filling up pretty quickly.

Only 12GB of the internal storage is actually available for you to use, although there is a 64GB model as well. That 64GB OnePlus One comes in “Sandstone Black” and is priced at a still reasonable $349, £269 (around AU$375).

The 13MP camera and dual LED flash on the rear of the OnePlus One is another plus point for the handset, boasting a Sony Exmor lens and Imaging Stabilisation Plus (IS+).

As well as snapping pictures the camera is also capable of capturing 4K and slow motion video, while round the front you’re treated to a selfie winning 5MP snapper.

CyanogenMod has also played around with the stock Android camera app, adding in more options to tweak your images, although the interface in the settings here could do with a bit of smartening up.

The shutter isn’t the quickest I’ve experienced and I found there tended to be a second or so pause between snaps. That delay could be down to the fact the OnePlus One isn’t running final software and hopefully it will be tidied up ahead of launch.

The OnePlus One sports a sizable 3100mAh (non-removable) battery under the hood which, coupled with the Snapdragon 801 processor, should deliver some impressive battery life results, although you’ll have to wait for the in-depth review to find out.

In terms of a OnePlus One release date there’s currently nothing firm to go on, although the company has revealed it will be giving away 100 of the new handsets in its phone smash competition on April 25.

I worry that if an offer looks too good to be true, it probably is. That’s exactly the feeling I get with the OnePlus One.

It has impressive top end specs, a fluid Android interface and a price tag which quite simply blows the competition out of the water. And to find there isn’t any obvious flaws with One makes it a mind boggling feat of power and price.

I’ve only had a brief time with the handset, so issues may arise during our in-depth review, but for now the OnePlus One looks set to seriously shake up the mobile market and the likes of Sony, Samsung and HTC will need to sit up and take note.