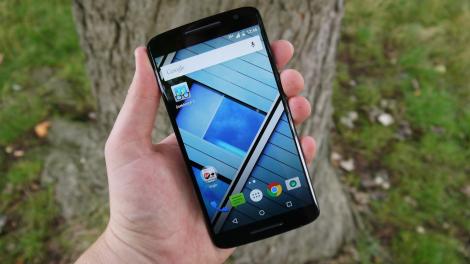 One of the biggest selling points of the Moto X Play is the battery 3,630mAh, which Motorola promises will last two days on a single charge, even when using 4G LTE and other battery-intensive features.

It also includes Motorola’s Turbo Charge technology, which the company claims is the fastest quick-charging tech on the market, giving the Moto X eight hours of battery life in just 15 minutes of charging. It does seem the Turbo Charger isn’t included in the box – which is a massive shame.

Continuing the phablet trend, the Moto X Play comes with an “edge-to-edge” (as Motorola calls it) 5.5-inch screen.

Admittedly my digits may be attuned to larger displays thanks to my extended time with the Motorola-made Nexus 6, but the 148mm x 75mm x 10.9mm dimensions and 169g weight certainly made it fine to operate one-handed despite the large display.

The 10.9mm depth doesn’t tell the whole story, as the back of the handset is curved, with the Moto X Play’s thickness starting at 8.9mm. The curved back felt good, and the rubberised material (which is available in a number of colours) helps make the device feel robust and easy to grip.

Motorola claims the design of the Moto X Play is “water-repellent” – note that it avoids using the term “waterproof”. This means that unlike the newly announced Moto G 2015 (which has an IPX7 rating), you won’t want to drop the Moto X Play in the bath – though if you get caught in torrential rain, it should be OK.

The 5.5-inch screen is also full 1080p high definition, giving the Moto X Play the same 401ppi pixel density as the iPhone 6 Plus. Although the screen doesn’t quite match the quality of Apple’s (much more expensive) flagship, it’s still bright and vibrant, and Android 5.1.1 Lollipop looks great on it.

As we’ve come to expect from Moto, the version of Android on the Moto X Play is admirably bloat free, and is about as close to stock Android as you can get.

As Motorola proudly stated at the launch event for the Moto X Play, it offers “pure Android, no bloatware no skins. Yet it’s completely customisable. It’s the best Google experience possible.”

This is great news if you’re sick of the unwanted apps or unintuitive custom skins that some other handset manufacturers like to include.

Websites looked great on the screen as well, and though I didn’t have time to fire up my Netflix account, from my time with the Moto X Play, I wouldn’t have any problem binge-watching a few TV shows on it.

I did manage a few laps with Real Racing, a graphically intensive game that did a great job of showing off the 1080p screen. Considering the price of the Moto X Play compared to the competition, the quality of the screen is certainly impressive – and I’m glad Motorola didn’t skimp by settling for 720p.

It also showed that the Moto X Play, with a 1.7GHz Qualcomm Snapdragon 615 Octa-core CPU, Adreno 405 GPU and 2GB of RAM, does a very good job of keeping up with the pace, as the game’s visuals kept a consistent framerate as I raced around the track.

Motorola has also fitted the new Moto X Play with a 21 megapixel camera, a hefty pixel boost that (on paper) puts the Moto X Play’s snapper in the same league as the one found on the Sony Xperia Z3+.

I also got to try out some of the additional features that Motorola has included with the camera. Both the main camera and the 5MP front camera have a blue glass filter that gets rid of infrared – which means images look more natural.

The effect will be particularly noticeable in low light conditions when there are smaller sources of light (such as light bulbs or candles on a birthday cake). The photos taken with the blue glass filter were compared with images taken on a Samsung Galaxy S6 (which doesn’t have the filter), and the improvement in colour accuracy was pretty clear.

The dual LED flashes on the rear camera include Colour Correlated Temperature features, which again helps keep colours accurate when using the flash, and I was impressed with what I saw. I wouldn’t say the inclusion was a deal breaker, however.

The front camera of the Moto X Play dosn’t have a flash, but in a rather clever move, uses the screen instead. When you take a selfie shot in low light, the screen will flash a bright light, again with the colour adjusted to make it look more natural.

The Moto X Play will hit stores in Europe, Latin America, Australia and Canada this August– though not the US. Disappointed American Moto fans shouldn’t worry, though, as Motorola has promised that more choices will be made available later – so there may be a US-orientated Moto X variant coming later. Watch this space.