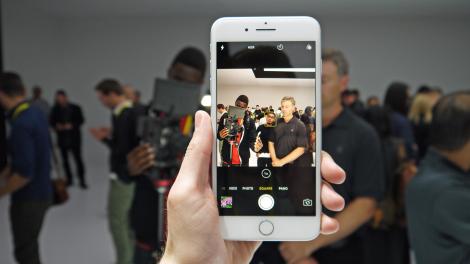 Apple’s recent strategy of bringing out an iPhablet that takes all the best bits of the smaller iPhone has been a strong one – but this year, the iPhone 7 Plus is a phone that’s markedly better than the smaller model.

That’s mostly achieved through two things: the battery life and innovative camera. The former is always going to be better thanks to the larger size, but by bringing a dual camera to the mix Apple’s made a conscious effort to make the 7 Plus seem like a distinctly different choice.

There are also new color configurations, more space to throw in your media and apps, and changes to the internals – we lose the headphone jack but gain a new kind of vibrating motor.

iPhone 7 Plus price and release date

The iPhone 7 Plus mirrors the smaller model with just three choices once more, offering 32GB, 128GB and 256GB storage options, depending on what you get up to with your phone. Hey, we’re not judging.

Apple’s larger iPhone has seen a price hike over the 6S Plus, especially in the UK where the effects of the vote to leave the European Union has pushed prices up even more. Gulp.

Whichever storage size you go for, the iPhone 7 Plus release date has been predictably set for the Friday after the announcement at the same time as the smaller 7, meaning you’ll be able to get your hands on one from September 16.

Apple’s not done too much drastic with the new iPhone 7 Plus, keeping to a similar design ideal as the previous models, the 6 and 6S.

We were expecting that it would follow the same pattern as years gone by, where the newly numbered models would be a new shape, but that’s not happened for some reason this year.

You’ll, therefore, struggle to tell the difference between phones from 2014 and 2016, unless you do some squinting (or count the cameras). One thing you won’t be able to see anyway is the fact that the new iPhone 7 Plus is water-resistant, meaning it’ll survive accidental pool slips and time in the shower. For the phone to look this sleek and have that ability is impressive indeed.

But there’s a big change: the loss of the headphone jack. Apple’s dropped this to make room for a new speaker, a thinner phone and theoretically a better battery – and that’s going to irritate a lot of people who haven’t prepared themselves for this moment,.

The good news is that the iPhone 7 will come with a Lightning to 3.5mm headphone jack in the box (ha, jack-in-the-box, just got that one) to help users make the transition – many of us have spent good money on decent headphones and don’t want to suddenly have to convert them to Lightning cables and this will help smooth the process.

You’ll also get some new EarPods, imbued with the Lightning connector so you can still pump sounds from your phone into your ears without having to ask someone to shout them over to you.

The way the phone feels in the hand is predictably similar to recent years, with the same curved edges that feel premium and ceramic in the hand. It’s Apple sticking with a winning formula, but can it convince users that this new design is worth the extra cash it’ll take to own this phone?

We only ask that as – to some – the way a phone looks is as, if not more, important than what it does inside… and Apple’s not changed a huge amount here.

The movement of the antenna bands on the back is a nice touch though – there’s something pleasing about the way the back isn’t as broken up any more, a solid plate of color looking back at you… you almost wonder why this wasn’t done originally when the iPhone 6 emerged, but there are a lot of engineering feats that go on under the surface of smartphones that probably explain that pretty easily.

The bands are hard to see on the phone, with the new jet black color making it almost impossible to see them – it makes you wonder why Apple doesn’t do more to disguise them on other phones, but we get the feeling the new color model is designed to be more premium.

Talking of colors, the iPhone 7 Plus also comes in a more normal black shade, so the two new black models have teamed up to eradicate Space Gray – no more of that choice and sadly none of the blue that we were expecting.

It almost feels redundant talking about the iPhone 7 Plus in the hand because, well, you’ve probably already felt it before. It’s got very similar dimensions to the current model and the one before that, so if you’re thinking of upgrading you’re probably doing so from a phone that’s a similar size.

If you are new to the Plus arena, then it will take some getting used to as the phone isn’t the most ergonomic around. That said the curved metal edges make it both nice to hold and a little slippery, so you’ll probably want to case it up to keep it safe.

It’s also going to be a big change for some people to have to deal with the lack of the home button – at least in the way they’re used to. The new button is non-clickable, instead relying on haptic vibrations to let you know that the correct contact has been made.

It’s an odd sensation, and I can’t say it’s one I particularly love. Because it’s pressure sensitive, it’s not enough to just rub it lightly, like you do with some other phones out there – you need to push until you feel a buzz that’s supposed to mimic a click.

It’ll probably become second nature over time, but it didn’t feel intuitive – and having to press harder to access Siri felt odd.

Apple’s been putting its highest-resolution phone screen in its Plus-size model for a couple of years now, and this time it’s no different.

Unlike the iPhone 7, the 7 Plus packs a 1080p 5.5-inch display, which is still some distance behind the competition – for instance, the Samsung Galaxy S7 Edge has a 5.7-inch display in a smaller package, thanks to it being wrapped into the chassis.

Sharpness doesn’t always give the whole picture though, as Apple’s use of LCD technology, the way the screen is bonded to the glass above and the overall color reproduction are lovely to look at, and hugely offset the lack of pixels that can be seen.

On top of that, Apple has increased the color gamut significantly and – as far as we could tell – the contrast ratio as well, meaning the richness of colors and depth on screen was improved. The screen is apparently also 25% brighter, but it was hard to notice much of that during our time with the device.

There was one question that pervaded: would a higher-res QHD screen look better here? Undoubtedly, and you can’t even say it’s battery life that’s the issue any more as other brands have more pixels and longer-lasting phones in a smaller body.

In guessing what Apple would make the central point of the iPhone 7 Plus, music was high on the list. After all, why would you get rid of the headphone jack if you weren’t going to offer an improvement in the sonic quality? The Lightning port can carry a tremendous amount of data across to your headphones, and as such Apple has boosted the iPhone 7 Plus’ audio capabilities to match.

Let’s start on the outside first though: the new iPhone has dual speakers, rather than the single mono output at the bottom of the phone. These are positioned top and bottom to create decent stereo sound, and the different angles make listening to tunes or watching films a real treat – well, they certainly make the phone itself vibrate when you’re holding it.

The direction is a little weird – one speaker coming out of the phone’s earpiece, and the other firing out from the bottom. It makes the sound a little directionless when you’re listening to it close up, but we’ll need to try it out in a room that’s not filled with the noise of a million cameras.

In terms of the audio performance, well, that’s going to need to be assessed properly – trying it over the wireless AirPods showed that it was as decent as before, but it’s surprising that Apple didn’t decide promote a dedicated audio amplifier or similar to show the sonic prowess of this larger, more powerful iPhone.

The camera is the big change for the iPhone 7 Plus, with the new snapper joined by, well, another snapper. Two lenses working in concert to create sharper and more vibrant images, the two 12MP sensors pulling together a single lens, and a telephoto one to allow for ‘proper’ zoom on a phone.

There’s now a four LED flash too, with more colors on offer to create a more natural-looking image when you incinerate someone’s retinas in a dark scene.

Apple’s making a big deal about this camera, and rightly so. There’s a power that two sensors can bring and Apple’s decided that instead of going for brighter images, it wants people to be able to zoom in. And on top of that it’s offering the ability to bring background defocus to photos, to bring more of a DSLR feel to the phone.

That’s a fine thing – but it’s technology that other brands have tried in the past. Nokia tried some advanced zooming capabilities on the Nokia Pureview 1020, and HTC’s One M8 had background defocus. Apple’s talking like it’s brought something massively new to the mix, when actually it’s refining it.

And in fairness, it’s refined it well. The user interface for the camera, when it comes to zooming especially, is decent – with a nice little smooth ring letting you move in and out. The optical image quality at 2x zoom looked clear and crisp – although you’d need to see it side by side with a digital zoom to make a proper assessment.

Apple has increased the battery life of the iPhone 7 compared to its predecessor, which is the least you’d hope given the shape hasn’t changed much. However, there was actually a slight battery life drop from the iPhone 6 to 6S (to allow for the 3D Touch screen), so there’s no certainty that the new iPhone will extend battery life.

Apple is claiming that the new iPhone 7 Plus can last an hour longer than the 6S Plus, and it’s likely those improvements come from the more advanced chip – a quad core A10 Fusion chip, that uses the power of the dual core ideas Apple has had for years and combines then with two lower-power cores for the less heavy tasks.

We’ll have to await the teardown of the iPhone 7 Plus to work out whether it has a bigger battery, or whether Apple has used the space it saved from the headphone jack to chuck in the Taptic engine and more speakers.

The iPhone 7 Plus is definitely an impressive phone, although we’re not in love with the fact that it’s another reboot of 2014’s design. With the S variant year on year it makes sense, as people are out of hte contract rhythm, but this time it doesn’t feel like enough has changed.

The camera looks impressive and will be really fun to check out, but the lack of a headphone jack is sure to rankle a fair few people. The sound quality has been improved, and it’s good that we’ve finally got a waterproof iPhone – it makes it feel a lot more secure instantly.

The Plus still looks like the phone the discerning Apple fan should be aiming for, but it’s hard not to wonder if a little more could have been done to make this super attractive to the 6 Plus upgraders.