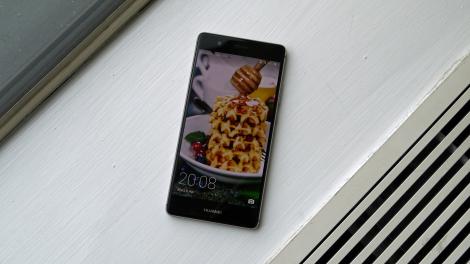 The Huawei P9 is the latest flagship smartphone from the Chinese firm, which is steadily improving with every handset it launches. The P9 then, is looking to be its best phone to date.

Huawei recently joined forces with photography giant Leica, so it’s no surprise the focus of the Huawei P9 is firmly placed on the two cameras bolted to the rear.

Taking over from the Huawei P8, which lacked any real unique selling point, Huawei has ensured this time around it has something to really shout about.

This isn’t the first time we’ve seen two cameras on a smartphone, with HTC, Honor and LG all having previous with the setup, but Huawei has done something a bit different on the P9.

First up, both of its 12MP lenses are “Leica certified”, as the two firms have worked together on the engineering of the camera hardware and software of the P9.

Then there are the lenses themselves. While both boast 12 million megapixels – like the single sensors on the iPhone 6S and Samsung Galaxy S7 – one of the two on the P9 is monochrome. Yep, black and white.

I was skeptical of this at first – there are plenty of good black and white filters on the market, so there’s no need for a smarphone to have a snapper dedicated to the one particular mode.

While you can opt to just use the B&W camera, the main benefits come when the two cameras work in unison. Huawei claims that with the addition of the data collected from the B&W camera, photo brightness can be boosted by 200%, and contrast by 50% over a standard, single RGB snapper.

They’re joined by a laser autofocus, which is one of the reasons for Huawei dropping OIS (optical image stabilization) on the P9. It says that its fast focus and shutter speed means there’s no need for the OIS tech. This is something I’m looking forward to putting to the test in my in depth review.

During my brief hands on time with the P9 it wasn’t overly noticeable that there was some magic going on behind the scenes. That’s not to say image quality was poor, even in the dimly lit preview room the P9 was able to snap detailed images.

It’s perfectly capable of taking good, solid photos – but it will be interesting to see how the Huawei P9 stands up to low light and high contrast situations in our full review.

Another feature which Huawei shouted about was Refocus, allowing you to change the focus point of an image after taking a shot. It also allows you to generate a Bokeh effect, where you blur the background and keep the foreground in focus – or vice versa.

It’s rather similar to HTC’s implementation of the One M8, which also used a dual-camera setup up to improve depth information,

I found it simple to use and surprisingly effective, with the P9 happily locking on to objects in the foreground while delicately blurring anything behind them.

Another nice feature related to refocus in post-production is the ability to add filters to your blur. The most striking is switching your blurred background to black and white, while keeping what’s in focus color. Simple, yet effective.

Huawei (and Leica) has also played around with the camera app on the P9. Fire it up and it’s pretty much business as usual – central shutter button, a few tools at the top, etc – but there are a few changes and additions.

Swipe from right to left to enter the settings menu, slide your finger in the opposite direction to view a wide range of modes, and pull up from the shutter key to enable Pro mode controls including ISO, white balance and shutter speed.

There’s plenty going on here, and I like the fact there are plenty of controls at your fingertips, yet are hidden away so they don’t get in the way of actually snapping photos.

Moving away from the camera and there’s something suspiciously familiar when it comes to the design of the P9. Not for the first time, this Huawei handset can be compared to the looks of Apple’s iPhone range.

The rounded corners, brushed aluminum unibody and antenna bands on the rear are all very much iPhone-esque. It’s not necessarily a bad thing, the P9 looks and feels like a premium device, but it doesn’t do anything to make itself stand out.

The volume rocker and power/lock key on the right are easy to hit, and the 5.2-inch full HD display with slender bezels means the Huawei P9 is easy to handle. The super slim 6.95mm body (thinner than the iPhone 6S and Galaxy S7) also helps when it comes to one-handed use – which was immediately noticeable coming from the LG G5 to picking up the P9 for the first time.

On the back, below the glass strip housing the dual cameras, flash, laser autofocus and Leica branding, sits Huawei’s latest ‘Level 4’ fingerprint scanner – and even better sensor than the excellent ‘Level 3’ Mate 8 offering – which should see you get lightning quick unlock times.

The SIM tray also has a slot for a microSD card, allowing you to build on the 32GB of internal storage by up to 128GB. That’s for the European variant of the phone though. In Asia the Huawei P9 will be available in dual-SIM.

Taking a look at the IPS display and it’s a pretty decent affair, although it doesn’t pop in the same way as Super AMOLED offerings. The full HD resolution at 5.2 inches means there are plenty of pixels per inch, but it’s a shame Huawei hasn’t plumped for a QHD resolution for its flagship smartphone.

On screen Android 6.0 Marshmallow greets you, but not in its original guise. Huawei has coated Google’s mobile platform in its Emoition UI – EMUI 4.1 to be exact – which sees the removal of the app drawer, a slightly altered notification bar and the Chinese firm’s own take on app icon design.

With each iteration Hauwei’s Emotion UI becomes more accomplished and it’s taken another step with the P9, but I still feel like it doesn’t do enough.

It still has a slightly childish look to it, and when compared to stock Android, or overlays from the likes of HTC and Samsung, Huawei’s effort just isn’t as polished.

It’s not overly offensive, and the powerful Huawei-made octa-core Kirin 955 processor and 3GB of RAM ensures everything runs smoothly.

I was able to jump in and out of apps and navigate round the interface with minimum effort. The Huawei P9 is certainly a slick performer.

A 3000mAh battery is in charge of keeping the Huawei P9 going, with the firm claiming it’ll happily see out a day of use on a single charge – but you’ll have to wait for the full review to find out if it realizes it potential.

The Huawei P9 will be available in Europe and Asia on April 16, while availability for the likes of the US and Australia are currently unknown.

Europe will see the Titanium Grey and Mystic Silver color options land in stores, while those in Asia will also get treated to Prestige Gold and Rose Gold variants.

The Huawei P9 is well stocked then, but it’s got a battle on its hands to challenge the heavyweights of the market, including the Samsung Galaxy S7, LG G5 and iPhone 6S.

While it’s not easy to infiltrate the top table, Huawei has been edging closer and closer in recent times and the Huawei P9 could be about to pull up a chair alongside the big boys – although it’s unlike to rattle its competition.