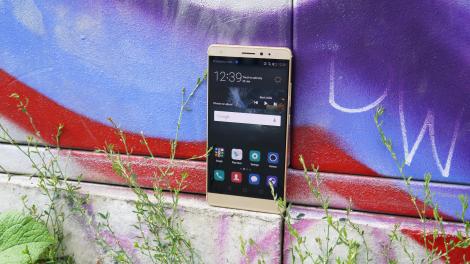 ‘Force Touch’ I hear you quizzically ponder, ‘isn’t that Apple’s thing?’ Well yes, it’s the fancy screen tech you find in the Apple Watch and the trackpad of the new MacBook – and yes, Huawei was the first to stick it in a smartphone.

It managed to get in a whole week before Apple announced 3D Touch on the iPhone 6S and 6S Plus – which is basically the same technology, but the Cupertino firm’s implementation is more fully formed than Huawei’s effort.

I say ‘kind of’ in my opening line because you may have some difficultly getting a Mate S with Force Touch. It comes in three models; 32GB, 64GB and 128GB but it’s only in that last model, the 128GB one, where you’ll find Force Touch.

SIM-free the 32GB model can now be had for a relatively modest £380 (US$500, around AU$750) with availability wide spread. If you’re in the market for the 64GB or 128GB Force Touch model then things aren’t so easy as they are still hard to come by.

Huawei did have a limited number of 32GB Mate S handsets with Force Touch available on its online shop for £569 (around US$800, AU$1,100), but that stock has been sold out for a while.

The Mate S is a premium device, and with its 5.5-inch display it shapes up nicely against the iPhone 6S Plus, OnePlus 2, LG G4 and it’s even gunning for the Samsung Galaxy S6 and Sony Xperia Z5.

The Huawei Mate S builds on its predecessor when it comes to design, with a slender 7.2mm all-metal frame looking and feeling suitably premium.

The slightly curved rear means it sits nicely in the hand, and while it has the same screen size as the iPhone 6S Plus, Huawei’s kept bezels to a minimum meaning it’s shorter and narrower at 149.8 x 75.3mm.

It’s far more palm-friendly than the Ascend Mate 7, with its mammoth 6-inch screen which really tested one-handed usage to the max.

At 156g it’s surprisingly light considering its size, and I found it comfortable to hold and its 7.2mm thick frame slipped into my pocket without issue.

The volume and power/lock keys are located on the right of the handset towards the top, and for me they were reasonably easy to hit. I can see their placement potentially causing problems for those with smaller palms though.

A way round the potentially awkward placement of these buttons, and the general size of the Mate S, can be found on the back. Below the 13MP camera sensor there’s a fingerprint scanner.

Huawei has updated the software used here for the Mate S, with Fingerprint Sense 2.0 bringing greater sensitivity and increased recognition. It’s certainly responsive, when it works, unlocking the Mate S in a blink of an eye when I touched my finger to the sensor.

It’s not quite up there with Apple’s Touch ID or the sensor on Samsung’s Galaxy S6 range, thanks to its slightly odd positioning and hit and miss performance – but I’ve used much worse.

That’s not all the fingerprint scanner can do though. You can also use it to take a photo, scroll through images in the gallery, answer calls, pull down the notification panel and silence an alarm.

I did find swiping down on the scanner to display the notification panel required a certain level of finesse and accuracy, but once you get your eye in its handy not having to stretch a finger all the way up to the top of the display.

In fact, it’s so useful that when transitioning to another handset I found my finger instinctively reaching for the finger scanner on the rear to bring down the notification panel.

That just shows what a useful feature it is, and it’s something that’s sorely missing from the Huawei-made Nexus 6P.

Trouble is, with the sensor located on the rear of the handset you can’t use it to unlock the Mate S when it’s sitting on your desk. This forces you to either pick up the phone, or hit the power/lock key and then tap in your pin.

It’s a frustrating situation, especially if like me you find yourself sitting at your desk most days, and one that could be easily solved.

Overall though I’m fond of the design of the Huawei Mate S. It’s one of the company’s best looking handsets to date, and it feels like a premium handset. Sit it next to the top of the line iPhone, Samsung and HTC and it’s not out of place.

The Huawei Mate S packs a full HD resolution into its 5.5-inch screen, which is a little disappointing considering rumors suggested it would have a QHD display to match the likes of the LG G4 and Samsung Galaxy S6.

While it may not be QHD, the 5.5-inch dimensions still provide a pleasing 401ppi pixel density – which will be more than enough for many users.

That matches the iPhone 6S Plus and OnePlus 2 in both size and resolution, and as Huawei CEO Richard Yu pointed out during the launch, it’s greater than the human eye can distinguish.

The screen also boasts AMOLED technology making it clear and bright, and I found that even in sunlight it was still useable.

It’s not as pin sharp as the Sony Xperia Z5 or Samsung Galaxy S6, and if you regularly consumer 4K content on your mobile then perhaps you’ll notice the difference – but you’re certainly in the minority.

I didn’t have any issues with the display quality during my time with the Mate S, colours are pleasantly bold and text is easy to read, and considering its slightly lower price tag you can’t really complain.

I had a 128GB Mate S for review, which means I got to play with Huawei’s Force Touch technology.

The 3D Force Touch Technology allows the display on the Huawei Mate S to gauge the amount of pressure you’re applying, and then provide different functions depending on the level of the force.

When looking at a photo you can hold down on an area to see it magnified in a bubble. The harder you press, the more zoomed in your magnification will be.

Come out to the gallery overview and hard pressing on an image should provide you with a larger thumbnail preview, but I never got this particular feature to work. It’s an option you have to switch on in the settings menu, but even then the Mate S wouldn’t play ball.

You can also remove the navigation bar at the bottom of the screen to give you more real estate, and then just press down firmly on the area where the buttons would be to perform the same commands.

I found this detracted from the user experience, as I had to apply quite a lot of pressure for Force Touch to register my requests. This was frustrating as you’re naturally used to light taps on these keys – so it slows things down. Needless to say I ditched this particular aspect of Force Touch quite early on.

There’s even an amusing scale app, which attempts to tell you the weight of an item. Trouble is, it’s not very accurate. It’s fun to show off down the pub, but useless if you genuinely require the exact weight of an item.

It’s certainly a fun feature to play around with, and Huawei has integrated it into the interface in a number of ways – but it’s still early days for the technology. When app and game developers get hold of it then we could see some truly awesome uses for it.

Trouble is with the Mate S the only Android phone supporting it, those applications are still a long way off.

The Huawei Ascend Mate S runs Android 5.1 Lollipop, but as with all devices from the Chinese firm it’s been coated in its Emotion UI – version 3.1 to be exact.

Emotion UI is certainly improving, and Huawei has tidied up the Settings menu and notification panels over the past few iterations – but for some it will still be a step too far.

There’s no app tray, meaning all your applications live on your home screens – very much like iOS on iPhone and iPad. That’s not a huge issue, but the way the interface looks is a little more jarring.

Here’s a premium piece of hardware with software which still looks a little childish. There is a themes generator allowing you to change the icons and colour schemes, but none of them manage to reach the levels of clean, minimalist professionalism of stock Android.

The good news is the octa-core processor and 3GB of RAM do a sterling job of keeping everything running smoothly. The Mate S should be able to handle pretty much anything you throw at it, but that will be put to the test in the full review.

With a 13MP rear camera and 8MP front snapper the Huawei Mate S, on paper at least, falls firmly into the mid to upper tier of smartphone cameras.

Don’t let that put you off though, as it’s packed the camera app full of features including the fully manual ‘Pro mode’ allowing you to fine tune ISO, shutter speed, brightness and more.

Shutter speed is generally pretty snappy, but during my hands on time with the Mate S I did find the auto-focus could be a little lethargic every now and then.

Huawei made a song and dance about the stepped battery design it’s implemented for the Mate S, allowing it to fit in more capacity. I was a little disappointed then when it revealed the Mate S packs a non-removable 3000mAh power pack.

That’s smaller than the 3300mAh offering in the similarly sized OnePlus 2, although it does match the LG G4. With a full HD display there will be less strain on the Mate S battery, and Huawei is promising more than a day of usage from a single charge.

You’ll have to wait for the full review to see if it lives up to that claim, but it’s worth noting the Mate S is fast charging enabled. A 10 minute blast with the charger is, I’m told, long enough to give you two hours of call time. Nice.

I rather like the Huawei Mate S. I’m glad Huawei has reduced screen size here, as it makes it easier to hold and the all metal body really does look and feel like a premium handset.

The fingerprint scanner on the rear is impressive, the camera is stuffed full of features and it’s coming in cheaper than the core flagships on the market.

It’s not all perfect though, with the headlining Force Touch technology available on a model which is yet to get a release date or price, and Huawei’s Emotion UI is still very much a Marmite interface.

That said, the early signs of positive for the Huawei Mate S and it’s definitely a handset you should keep an eye on.