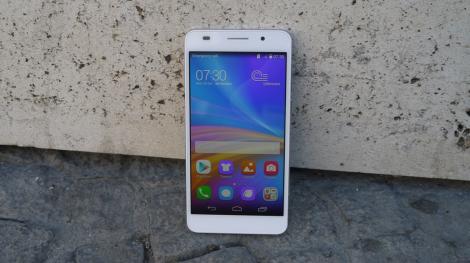 The Honor 6 (by, say it quietly, Huawei) has touched down in Europe and the UK, touting superfast 4G speeds and octa-core power at a rather attractive price point.

While it’s a new phone for Europe, the Honor 6 was actually launched in Asia back in June, but don’t let that put you off.

It’s that last spec – the category six 4G capability – paired with the octa-core chip which Huawei is using to dub the Honor 6 ‘the world’s fastest smartphone’.

Category 6 LTE can theoretically gives you download speeds of up to 300Mbps per second, which all sounds very impressive until you remember none of the UK networks currently offer anywhere near that.

You’ll also not be able to pick it up from any UK network, with the Honor 6 being sold SIM-free exclusively via Amazon. The price, however, may tempt you to consider it with it coming in at just £249.99 (€299.99).

While those superfast download speeds may not be achievable yet in Europe, it does mean the Honor 6 is nicely future proofed for when CAT 6 eventually washes ashore in the UK.

Huawei doesn’t want its name directly associated with the handset, as it’s looking to build Honor as a standalone brand – something which is a bit bolder and ultimately I guess, more marketable. At least I know how to correctly pronounce ‘Honor’, even if it is spelt the wrong way.

In terms of design the Honor 6 does little in the way of breaking any new ground. Front on it’s simply just another black (or white) touchscreen smartphone, while round the edge a silver band hugs the plastic case.

It doesn’t wrap the whole way round device, with the band ending before it reaches the bottom edge of the handset in an attempt not to look exactly like an iPhone.

The rear at least sports a pattern Honor is calling a 3D diamond effect, and when it catches the light in the right way it does look pleasing to the eye.

Overall though I found the design rather bland, the Honor 6 isn’t a smartphone which is going to stand out and while it’s packed full of tech there’s no getting away from the fact that it looks, and feels, a little cheap.

Consider its price tag though and the cheap, plastic body can be forgiven – after all the OnePlus One sports an all plastic body and that’s still a great phone.

The Honor 6 doesn’t feel quite as sleek as the OnePlus, but its smaller size means it fits better in the hand and you shouldn’t have any trouble reaching all corners of the screen during one handed operation.

The power/lock and volume rocker keys are located on the right of the Honor 6, both of which are within easy reach.

Further down this side of the handset you’ll find an easy to remove plastic flap covering the microSIM and microSD slot ports. The Honor 6 comes with 16GB of internal storage, so for those of you who like to carry round a lot of media the ability to expand on this will be welcome.

Like similar flaps on other handsets, the one of the Honor 6 feels pretty flimsy, and I’d be concern that it would break off if used frequently.

Up top you’ll find the headphone jack, while on the base of the Honor 6 you get the microUSB port.

The 5-inch full HD display is bright, clear and welcoming – video playback will be pleasing thanks to the 445ppi, which bests the OnePlus One and its larger 5.5-inch screen.

Screen quality looks to be up there with the high-flying full HD handsets currently on the market, so even though the Honor 6 is arriving at half the price of the flagships it certainly doesn’t disappoint here.

As I’ve already mentioned there’s plenty of power under the hood of the Honor 6, and it’s in charge of running Android 4.4.2 KitKat – although that has been covered by Huawei’s Emotion UI 2.3.

The interface has been improved considerably since it debutted a few years ago, but it still feels like it’s lacking when compared to the likes of Samsung’s TouchWiz, HTC’s Sense and stock Android.

Icons look more childish than professional, and the removal of the app draw completely will put some dedicated Android fans off.

During my hands on time I found the Honor 6 was quick and responsive. I was able to easily sweep through home screens, apps loaded in good time and I didn’t experience any obvious lag.

It will be interesting to see if it can keep up the same slick performance once stuffed full of apps, games, music and movies – but the early signs are positive.

On the rear you get a 13MP camera located in the top corner of the device, alongside a dual-LED flash, and the placement is reminiscent of iPhone and Sony Xperia handsets.

It boasts a 0.6 second ultra fast snapshot function, letting you grab a snap without even unlocking the phone or opening the camera app.

A double press of the volume key in standby mode will enable the snapshot feature on the Honor 6. It’s a feature I’ve used on previous Huawei devices and again it works well here.

While I didn’t manage to get a 0.6 second reading, the Honor 6 I got hands on with consistently claimed I was snapping pictures within 0.9 seconds of double clicking the volume key.

Even in the unconventional lighting of the display area the Honor 6 was able to take sharp, in focus snaps which impressed.

Meanwhile on the front there’s good news for selfie fans as a 5MP lens sits above the 5-inch display, complete with panoramic selfie which lets you get more of your mates in.

The Honor 6 makes some impressive battery claims, and it comes with SmartPower 2.0 technology which will apparently give you over two days usage on a single charge.

I’d be surprised if it was that good, but the Honor 6 does at least pack a decently sized 3100mAh power pack under the hood so initial signs are positive.

As you may have gathered when I mentioned the flap covering the SIM and SD ports, you cannot remove the battery inside the Honor 6 – so no swapping it out for a fully charged replacement once it dies.

There’s also an ultra power saving mode which kicks in when the battery level of the Honor 6 reaches 10%. It automatically switches off data and switches the interface to a simplified offering with just the dialler, contacts and messaging apps available.

You’ll have to wait for the in depth Honor 6 review to find out if it really can live up to the bold claim, or whether it falls short. I for one am very interested to see how it gets on.

The strapline for the Honor 6 is “for the brave” and you’ll have to be brave to purchase a handset online from a relatively unknown brand without being able to check it out in person first.

Take the leap though and there’s every chance the Honor 6 can become an underground success in a similar fashion to the OnePlus One. Can lightning really strike twice? Only time will tell.