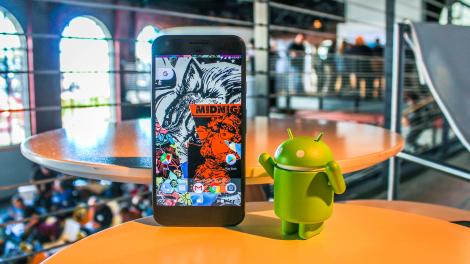 You don’t have to shop in the big-and-tall section of stores to want the Google Pixel XL. It’s a powerful phablet at a still-reasonable size, and it’s made by Google.

This 5.5-inch Android phone is the successor to last year’s Nexus 6P, as Google is altogether ditching the affordable, developer-focused Nexus brand in favor of this new Pixel XL and its smaller 5-inch Pixel counterpart.

Here’s our hands-on video review of the Pixel XL

You’re getting top-of-the-line specs now, but also a noticeable price bump. The Pixel XL has a metal body, a 2K resolution screen and debuts a blazing-fast Snapdragon 821 processor with 4GB of RAM inside.

Big highlights we’re testing out right now for our review include the 12.3MP camera on the back and the 8MP shooter on the front. Google says the rear camera is the best ever in a smartphone – we’ll be the judge of that. If you’re upgrading from a two-year old Android phone, the fingerprint scanner is also a big deal.

What hasn’t changed in the move to the Pixel XL moniker is that the new phone features the latest version of Android: Android 7.1 Nougat. This gives the phone Google Daydream VR capabilities to rival the Samsung Gear VR.

The Google Pixel XL is sized to compete with the elegantly designed Samsung Galaxy S7 Edge (that’s the one that doesn’t explode) and iPhone 7 Plus – but does it really pack enough punch to make it onto our best phones list? Let’s find out.

The Google Pixel XL price is more than your average Nexus phone at launch. The official price in the US is $769. That’s just as much as a top unlocked phone from almost any other manufacturer, including Apple’s iPhone 7 Plus.

Alternatively, in the US, you can buy the Google Pixel XL at Verizon and pay that price over the course of 24 months at a rate of $32 a month.

It was announced to be a Verizon exclusive, but don’t worry, that’s only for people looking for a subsidized plan. AT&T, T-Mobile and Sprint users can just buy the unlocked version from the Google Store.

The Google Pixel XL price in the UK is £719. Again, that’s expensive for a Google-made phone. The same goes for Australia, where the phone starts at AU$1,269.

Google is readying its new Android 7.1 phone to launch on October 20. Pre-orders began on October 4 in the US, UK and Australia.

The Google Pixel XL blends together glass and metal, and it’s attractive, even if the two-tone design on the back and large front bezels aren’t as stylish as a Samsung phone. And it’s way better than the renders that leaked.

Glass makes up the top half of the back, where the fingerprint sensor and camera reside. There’s nothing notable on the button-free front of the phone, as Google uses on-screen buttons in stock Android.

Unless you’ve managed to get your hands on an Asus Zenfone 3 Deluxe this is probably the first smartphone you’ll be able to try with Qualcomm’s Snapdragon 821 processor. It’s a step ahead of the Snapdragon 820 that’s in just about every other big Android phone launched in 2016.

What’s that mean for you, exactly? The new System-on-a-Chip promises better performance to the tune of a 10% increase in speed. It’s snappy from our quick testing.

It’s also helped out by the fact that there’s 4GB of RAM here, giving you a higher ceiling for opening up all sorts of intensive apps at once. The Nexus 6P had 3GB of RAM, which was the norm for 2015.

Once again, there’s no microSD card slot in the Pixel XL. That hasn’t changed in the Nexus-to-Pixel conversion. Instead, you’ll have to rely on the 32GB or 128GB of internal storage here. No, there’s no 256GB model either.

Don’t let the 12.3MP camera fool you in an age where some other Android phones have 20MP cameras, as Google claims that the Pixel XL’s camera is the best ever.

We’ve heard promising claims before from Google, and while the Nexus 6P camera was good, it was still far from the best next to Samsung and LG phones in dimly light environments.

The rear camera uses large 1.55 micron pixels, which should help it capture more light, but it has an f/2.0 aperture – which is to say a fairly small opening in the lens, thereby letting less light in to begin with than some phones, so we’re eager to test out how exactly these camera specs amount to “the best.”

On the front, there’s an 8MP front-facing camera, which on paper is better than a lot of the 5MP selfie cameras that we’ve seen on many Androids, though we’ve snapped a few selfies and it’s hard to tell the difference in a poorly lit demo room.

4K video is also here, and we’re interested to see how it turns out next to the Samsung Galaxy S7 and LG V20, since both those phones feature impressive steady shot technology. Google showed a demo of it working flawlessly, of course. Check back for camera samples in our full Google Pixel XL review.

Impressive specs are nothing without longevity, but that may not be a problem here as the Google Pixel XL battery is supposed to last more than a day, thanks to a 3450mAh capacity.

That’s the same size as the Nexus 6P battery, but it’s likely to last even longer as the Google Pixel XL’s display is slightly smaller at 5.5 inches instead of 5.7 inches, so there’s less screen to light up.

Second, and most importantly, Android Nougat features behind-the-scenes Doze 2.0 technology that better suspends needless activity while your phone is idle, on your desk or in your pocket.

We’ll run a full battery life test on the Google Pixel XL when we get a final review unit in our hands.

You won’t have a rough transition between liking Nexus phones and enjoying the Google Pixel XL. It’s still the best way to enjoy the latest version of Android.

The phone won’t take forever to get an upgrade to Android 7.1 Nougat, because it’s here out of the box, complete with Google Daydream VR capabilities. Future Android updates are going to debut on this phone, too, at least for a while.

Even better, it’s the first to offer the fast Snapdragon 821 processor in the Western world. The Asus Zenfone 3 Deluxe didn’t come out in time to claim its “world first” title in the US and UK.

All of this makes the Pixel XL a more expensive phone than the Nexus 6P – but the cost is in line with other top-tier flagship handsets. It’s just more money than a Nexus device.

But think about it, no Nexus debuted both new specs and new software. Google is finally providing consumers with both on a stock Android device. That’s a big switch.

We’ll have to get used to the Pixel name and this phone’s two-tone finish of shiny glass and matte metal on the back, and do our best to forget about the needless bezels.

That’ll be a simple ask if the camera and battery life hold up in our forthcoming full review of the new best way to experience the latest Android has to offer.