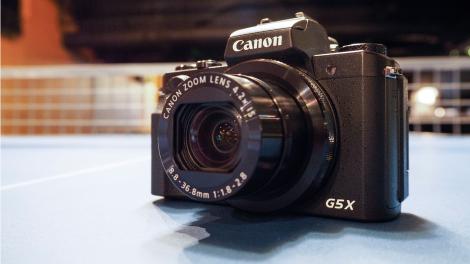 The G5 X is one of three new cameras launched by Canon. The others are the G9 X, another compact camera, and the EOS M10 mirrorless model.

The G5 X is potentially the most interesting because it offers enthusiast-orientated controls in a pocket-size camera with an electronic viewfinder, and we’ve now been able to update our hands-on review with sample images.

Inside the G5 X (and G9 X launched at the same time) is the same 20.2 million-pixel back-illuminated 1-inch type sensor as is found in the Canon G7 X, which impressed us when we tested it in 2014. As in the G7 X this sensor is coupled with a Digic 6 processor and sensitivity may be set in the range ISO 125-12,800. The G5 X also has the same lens as the G7 X; a 4x zoom with a focal length range equivalent to 24-100mm. There’s also a maximum aperture range of f/1.8-2.8, which ensures reasonable control over depth of field.

In a significant difference from the G7 X, however, the G5 X has an electronic viewfinder (EVF) built-in. This is a 0.39-inch type OLED device with 2.36 million dots and it shows 100% of the scene that will be captured. The EVF also has a refresh rate of 120fps, which should ensure that it’s possible to follow moving subjects accurately. According to Canon this EVF is similar but not identical to the optional EVF that’s available for the G3 X.

Canon has also given the PowerShot G5 X a 3-inch 1,040,000-dot touch sensitive screen that’s mounted on a vari-angle hinge to make it easier to compose images in either upright or landscape format at high or low angles.

Further good news is that like other G-series cameras, the G5 X offers advanced exposure control with aperture priority, shutter priority and manual mode being available, as well as a collection of scene modes and automatic options. There’s also stabilisation built-in to help produce sharp images as light levels fall.

Canon has opted for retro styling for the G5 X. Some may find it a little old-school and angular, but I rather like it. It’s not a million miles away from the Sony A7R II in looks. It feels reasonably well constructed and there’s a nice secure grip on the front.

The electronic viewfinder sits in the middle of the top-plate and this gives the camera a mini-DSLR-like appearance. There’s also a retro control arrangement with a ring around the lens along with dials on the front and back of the camera that can be used to adjust a range of settings. In addition, it’s nice to have a dedicated mode dial to set the exposure mode quickly and a compensation dial for speedy exposure adjustment by up to +/-3EV.

Initially I found the shutter release a little awkward to reach as your index finger has to stretch over the exposure compensation dial. However, I adjusted my grip a little so that my index finger could be poised on the release while my middle finger rested on the front adjustment dial. This enabled me to make quick setting changes with the camera held to my eye. I want to explore this control arrangement further when we get the camera in for testing.

Meanwhile the lens ring is within easy reach of the fingers and thumb of your left hand as you support the camera for shooting.

Having a viewfinder is huge advantage in bright conditions and the G5 X’s EVF is very good. It’s more comfortable to use than the unit in the Sony RX100 III and Sony RX100 IV and it doesn’t have to be popped-up and extended like theirs do – it’s ready for use whenever you need it. There’s even a helpful sensor that detects when the camera is held to the eye to fire up the viewfinder and turn off the main screen.

Like the viewfinder, the G5 X’s screen provides a clear view. It also responds quickly to a touch and it’s easy to adjust settings and swipe through images.

To introduce its new PowerShot G5 X, G9 X and EOS M10, Canon took a party of journalists to a derelict factory awaiting redevelopment in the London docklands for a little urban exploration. This was the ideal opportunity to try out the G5 X in a range of conditions.

This was taken at the lens’s maximum zoom setting and it looks just as sharp as shots taken at shorter focal lengths – it also looks sharp right to the edges. The colors and contrast are good, and the auto white balance has captured the natural color of the mid-afternoon low sunlight very well. Click here for a full size version.

And here’s another with the lens zoomed right out to give an idea of the focal range offered by the lens. Click here for a full size version.

This was taken at an ISO setting of 6,400. There’s an obvious increase in grain and a noticeable drop in detail, but this is still a good performance from a compact camera, and the larger than usual 1-inch sensor is no doubt a factor. Click here for a full size version.

Even at a relatively low ISO of 125, however, the G5 X has not had enough dynamic range to hold on to the highlights in the bright sky here. It’s possible that the raw file might hold some extra highlight information, but we’ll have to wait until we have the latest Canon raw conversion software to check. Click here for a full size version.

The colors and tonal rendition are good here, but the G5 X’s program AE mode chose a surprisingly slow shutter speed of 1/20 sec, even though this was shot at the maximum zoom setting. It’s a shame the camera didn’t choose a higher ISO to allow a faster shutter speed because the picture is blurred slightly by camera and subject movement. This is one of those situations where you’d need to take control manually. Click here for a full size version.

The autofocus worked well, even in low light. You can tap the screen to set the focus point, though it’s often just as easy to use the centre point and half-press the shutter button to lock focus and then reframe. Click here for a full size version.

This low-angle shot was taken just a couple of inches above the surface of an expanse of water to capture the unusual reflection. The G5 X’s articulating screen made this possible although, oddly, the eye sensor next to the viewfinder was confused by the high visibility jackets we were wearing, and didn’t always switch the view automatically to the rear screen. Click here for a full size version.

The combination of a larger than usual sensor, for a compact camera, and relatively wide aperture lens means it’s possible to get sharp foreground focus and attractive background blur, especially if you can get close to your subject. Click here for a full size version.

The G5 X’s default evaluative metering seems to favour highlight areas of the scene, which is probably what most enthusiast photographers would prefer. It exposed the scene beyond the window perfectly here, without the need for any exposure correction. Click here for a full size version.

Finally, here’s another example of the G5 X’s excellent color rendition. The wall of the building opposite ours was bathed in a warm reflected glow from the late afternoon sun, and the G5 X has captured it perfectly. Click here for a full size version.

This second shot, taken roughly half way through the zoom range, has kept exactly the same exposure value and color rendition without the need for any manual adjustments. Click here for a full size version.

Our early samples suggest that the PowerShot G5 X is just like the older G7 X model. Like the G7 X, it produces high quality images in many situations, usually without much intervention from the photographer. With the G7 X, noise is controlled well but ISO 12,800 images are best kept fairly small – 8×10 inches is fine. We look forward to checking to see if the G5 X is the same.

Many of our G5 X samples were taken in low light and its autofocus system coped well – it will be interesting to test this further in our full review.

When I tested the G7 X I found that images shot at the widest point of the lens showed a more noticeable drop in sharpness across the frame than those taken at the telephoto end and some coma distortion was visible – we’ll take a close look at the G5 X’s images to see if this has been corrected.

After a prolonged period when manufacturers omitted viewfinders from compact cameras, they are now making a welcome return. While I liked the Canon G7 X a lot when I tested it, it doesn’t have a viewfinder built-in and this made image composition trickier than I’d like in bright light. It’s also easier to follow a moving subject in a viewfinder rather than on the screen on the back of the camera. The G5 X corrects this omission by adding a good quality electronic viewfinder.

Although it has a much in common with the G7 X and there’s a similar lens ring along with a responsive touch screen, the new camera feels quite different, having a pronounced grip and a new control arrangement with an extra dial on the front. The shutter release seems oddly placed at first but it didn’t take me long to adjust to it. It will be interesting to see how convenient or comfortable it is during prolonged use. I’m looking forward to giving it a thorough test in the near future.