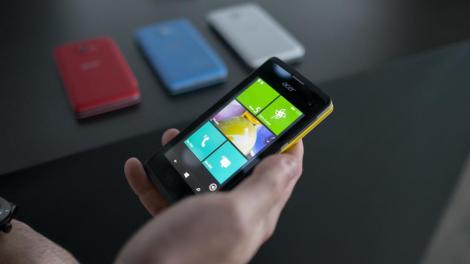 Updated: Acer has announced the Liquid M220 will be the company’s first ever smartphone to be sold in the US with Windows 10 in tow.

Acer revealed a number of new phones at MWC 2015 but none of them stood out to me as much as the Acer Liquid M220. It wasn’t down to the specs though, the Liquid Jade Z surely takes the crown there. It stood out as it has taken the strange route of adopting the Windows Phone platform.

So far all Acer devices have been running on various iterations of the Android OS, enough that it has built up its own UI design overtime. I never saw the company stepping away from the platform as I never thought it’d have reason to.

If the Liquid M220 does anything though, it proves Acer’s step toward the Windows Phone world is just a brief foray into the territory before it likely jumps and heads back into the Android forest.

The Acer Liquid M220 comes with the latest Windows Phone 8.1 software on board and is confirmed to be getting the Windows 10 Mobile update – in time.

But the company hasn’t put all its eggs in one basket and has decided to offer the same spec and hardware package with Android on board instead. The Windows Phone version will cost £69.99 (about $105) while the Android version will be on sale for an extra £10 or so.

At a New York event on April 23, Acer also announced its plans to bring the handset stateside for $79. The Liquid M220 will also be available at retail Microsoft Stores preloaded with Windows Phone 8.1 and a free upgrade to Windows Phone 10.

Even speaking to the representatives on the Acer stand no-one seemed positive the Windows Phone version of the Liquid M220 will sell well even though it comes in that little bit cheaper.

The build of the Liquid M220 is quite nice considering the ultra-low price point. The back panel has a matted texture offering more grip with a protruding edge around the handset coloured silver and offering even more grip while in the hand.

I’m a big fan of the different feel on the rear but the edges feels a little like overkill and it doesn’t really offer much for the user.

Under the hood isn’t anything to marvel at – it offers a 1.2GHz dual-core processor alongside 512MB of RAM, but it should be able to cope with low intensity apps.

It’s all powered by a weak 1300mAh battery but it doesn’t have much to power here so hopefully it’ll offer some long life in the day-to-day usage.

The internal memory is only 4GB causing a big problem as the operating system takes up 2.6GB meaning it’s only got 1.4GB of storage left for any media you want to upload. When storage is this low it can mean it’s a struggle to fit in all the apps you want as well, so it may be a good idea to extend the storage with a microSD card of up to 32GB.

On the back of the handset sits a 5MP main camera with an 89-degree lens – it will take alright looking normal shots but it’s not the kind of phone designed to be taking high quality photos. On the front is a 2MP sensor for the odd selfie.

Nothing really stands out here in terms of specs – the most exciting aspect here is Acer taking on the Windows Phone platform. It is the cheapest Windows Phone device you can buy on the market and if anyone really loves the platform that much it’ll be a great find for such a low price.

Windows Phone is not the draw it wants to be though; it still has a serious lack of apps and is so far behind compared to either iOS or Android that it will always struggle to catch up.

It’s difficult to see why anyone would choose the Windows Phone version of this handset over the Android version but at least Acer is trying to expand a little. Only the sales figures will show if Acer will see fit to explore the Windows Phone world a little bit more.