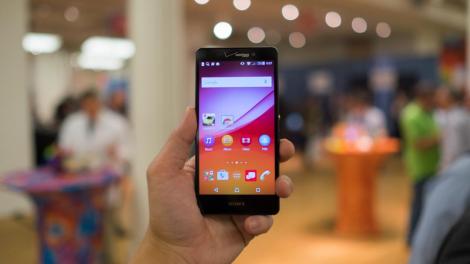 Update: In a strange turn of events, Sony and Verizon have announced that their plans to release the Xperia Z4v have been cancelled. We were looking forward to this one coming out stateside, but we, just like you, will have to wait a little longer for Sony’s next smartphone.

Sony’s latest flagship smartphone, the Z4v, is an offshoot of the Xperia Z4 and Xperia Z3+ that’s making its way to US shores by way of Verizon Wireless. The new release aims to provide the best traits of each of those phones, while also offering enough aesthetic and internal boosts to trump last year’s Xperia Z3v, which was also available through Verizon Wireless.

While the build I got my hands on was only a working prototype and didn’t feature final software, the presentation was complete enough for me to make some snap judgment calls before its tentative summer release.

The Z4v has what it takes to hang with the sharpest and most powerful smartphones available in the US. But if you were hoping for a direct translation of the Xperia Z4 or Z3+, you might be a little disappointed.

Sony’s line of smartphones rarely receive a massive design overhaul and the new Xperia Z4v is no exception. While it does bring along some minor, appreciated tweaks in its design, the somewhat boxy, yet sleek physique that it’s known for remains in full form.

Its rounded edges are comprised of matte-textured plastic, smoothed over to make the phone a pleasure to grip and hold. It’s not nearly as flashy as the aluminum-detailed Z3+, but it’ll do.

The camera shutter button, as well as the volume rocker and silver power controls occupy the handset’s right edge, as usual. On the left side, one flap covers a slot that you can stuff a nano SIM, as well as a microSD card into.

Moving down to the bottom, Sony re-engineered its micro USB charging port so that it no longer needs to be covered by a flap guard during splashy adventures, as it retains the strong IP68 weatherproof properties that protect the rest of phone. Finally, on the top, there’s a 3.5mm jack for listening to media through headphones our outputting through a larger, more capable set of speakers.

The Z4v measures in at 144 x 72 x 8.6mm (L X W X H) and rocks a lightweight body weighing 160g. Those who have been keeping track of the Xperia Z3+ will notice that the Z4v gained a bit of heft, not just in weight (a 16g increase) but also in terms of thickness, where Sony stuck on almost an extra two millimeters. This might not seem like much, but it’s quite a remarkable sizing change-up from recent phones in the Xperia line.

The front and back of the Xperia Z4v are each covered in a sheet of tempered glass that looks and feels premium. On the downside, you’d better be in the habit of carrying a cloth with you, as it makes this unit a total fingerprint magnet.

The front-facing panel features the signature carved-out spots for the speaker placement on the top and bottom edges. Also similar to the Z3+ is the bezel, which is slim and appealing here. The only other change in front-facing design is the Sony logo, which now appears beneath the screen in favor of a large Verizon logo taking its place on top.

Flipping the phone over reveals an equally smooth surface, only obstructed by the new 20.7MP camera, which juts out less than the camera housing on the iPhone 6 and iPhone 6 Plus. The NFC logo occupies its usual space, about a third of the way down the back of the phone. Right beneath it is yet another Verizon logo.

The Sony Xperia Z4v we got some time with was black throughout, but will also be available in white upon its Summer release in the US.

As stated earlier, the software running isn’t final, nor is the product I got hands-on time with either. In this state, I’ll avoid coming to a complete conclusion on performance, but what I saw looks promising.

Running on Android Lollipop 5.0.2, the Xperia Z4v is a snappy device, operating on a balanced mix of stock features with a few touches of custom overlay. I was pleased that it never got bogged down while I swiped away and accessed the limited set of apps and features available to me.

Internal storage out of the box with the Z4v rings in at a generous 32GB, with support for additional storage through the microSD slot. The 3GB of RAM, working in tandem with the octa-core, 64-bit Snapdragon 810 seems to be doing the right tricks to make this phone tick at a good measure. You can rely on some fairly extensive testing being done once we get the final hardware in our hands.

Despite being limited during my hands-on time to an aggressively lit convention room, the phone’s 5.2-inch IPS panel features pretty good viewing angles. It gives off a warm, vibrant picture and is full of detail, thanks to its WQHD (2560 x 1440) resolution. This is a step up from both the Xperia Z3+ and last year’s Xperia Z3v, which both feature only FHD screens.

With a meatier screen, the battery inside better be good enough to power it for a long time. Unfortunately, while we won’t know just how long it will last until we get a review unit, we do know that Sony has increased the battery capacity to 3,000mAh.

It’s a slight, but appreciated improvement over the 2,900mAh-toting Z3+, but compared to the Z3v’s 3,200mAh, we’re left puzzled. For how much larger the Z4v is physically than its relative counterparts, why not include a battery with more juice in it?

Moving onto the cameras, which is the deciding feature in a smartphone for many, I had mixed results. It’s hard to expect much from a decent DSLR camera in such a harshly lit room, let alone a smartphone camera.

That said, the samples that I snapped with the 20.7MP sensor on the back, which offers improved ISO versatility in low-light situations, were pretty good. The colors are accurate, the white balance did a serviceable job of painting the scene without harsh highlights or grainy dark spots.

On the other hand, the 5MP front-facing captured shots that were a little less than favorable. Again, it’s tough to be harsh when you shoot in a room with unforgiving lighting conditions, but I found the results to be lackluster. I absolutely loathed the blur effect that I couldn’t avoid during my hands-on, making each photo look like my face was caked with a pound of makeup. We’ll test the cameras much more extensively for the final review.

Another deciding feature for some is gaming, which is where the Sony Xperia Z4v beats out the competition with its PS4 Remote Play feature. Through an app, it’s easy to hook up a DualShock 4 controller and get going with Android games built into the phone, or to connect to a nearby Sony PS4 and continue where you left off on a blockbuster title.

From my time with Sony’s US-bound Xperia Z4v, it seems to check a lot of the necessary boxes. It’s comfortable to hold, responsive and easy to use and it looks stunning.

At the time of writing, I don’t know how much the phone will go for. Whereas most Xperia phones have the tendency to be prohibitively expensive, it’s likely that the Xperia Z4v will be more affordably priced (relative to the competition), since it’s tied to Verizon Wireless contracts. Full pricing details will be available closer to the phone’s release.

Additions like the WQHD panel are appreciated, as are features that some might not even use, like wireless Qi charging support. But some of the changes come at a cost. Namely, the size of the phone and the battery inside. I’m not sure why these feats couldn’t have been accomplished in the same slim and lighter build of Xperia Z3+, but hey, I don’t make phones.

We’ll see if and how these design choices impact the Z4v’s performance once we get our hands on a review unit. Until then, what’s here provides more than enough reason to be excited for the Xperia’s return to the US.