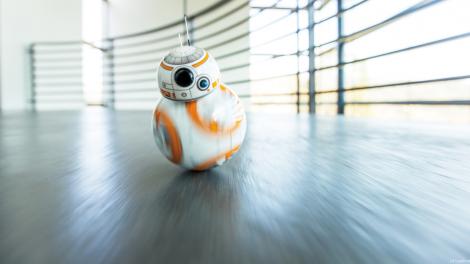 At a press event for The Force Awakens earlier this year, Star Wars fans got a surprise when a droid they believed to only exist on film thanks to CGI made a notable appearance on stage.

The animated BB-8 droid rolled out onto the stage to rapturous applause, immediately causing Star Wars fans from around the world to exclaim “I want one”.

The company responsible for the BB-8 droid is Sphero (formerly known as Orbotix), a startup electronics firm that shot to fame off the back of its first remote controlled robot toy, the Sphero.

While Sphero helped develop that full-sized BB-8 droid that appeared on stage earlier this year, the more exciting news is that the company has shrunk the droid down to consumer size, so Star Wars fans can get their hands on a BB-8 of their very own.

A week ago, techradar was lucky enough to have a demo with Sphero’s BB-8 droid and interview Jim Booth, the COO of the company.

Like the company’s former products, BB-8 is controlled by a smartphone app that will be available on Android and iOS at launch, but is slated for Windows phone compatibility later in the year.

The app opens with a familiar Star Wars theme tune while it pairs to the droid via Bluetooth and though the initial setup takes a little longer than expected – the app actually loads BB-8’s orientation data from the droid itself – the connection was stable.

Once downloaded and paired with your device there is a menu screen with four options: Drive, Message, Patrol and Settings.

The first Drive menu borrows from the Sphero app and requires you to hold your phone in landscape mode while you control BB-8’s movement with your left hand.

After orienting the droid using a blue light that shines through BB-8’s waistline, you can move it in the direction you want using the simple joystick pad on the touchscreen.

On the right side of the screen are a series of gestures and commands that you can give to the droid like “run away” or “go to sleep”.

Interestingly, these commands aren’t just buttons either. Sphero has leaned on Siri and Google Now’s speech recognition architecture, building a series of voice commands that will be localized to regions with support in a number of countries following launch.

If you feel like having BB-8 zip around the house but aren’t in the mood to actually control the droid yourself, the Patrol feature gives BB-8 a mind of it’s own.

According to Booth, “there is actually a surprising amount of sensors in the droid that all work together to allow BB-8 a level of autonomous traveling.”

With gyroscopes, near-object sensors and operational commands, BB-8 draws on your smartphone’s smarts to run a robot algorithm autonomously.

Interestingly all of the sensors will display data in gauges so you can see the readings of each of BB-8’s components and get a feel for how the droid navigates the world.

Initially this will run a pre-installed patrol program, but Booth stated that he would like to open up the automated program to customization in the future for Sphero’s many robotics fans.

Just you reconsider playing that message for him!

Though we have covered some interesting applications of the latest smartphone tech already, the developers behind BB-8 have actually integrated something even more interesting into the messaging section of the app: Augmented Reality.

One of the most important functions of the droids in the Star Wars films is their ability to surreptitiously deliver important messages between Jedis.

Though this feature is generally dedicated to the non speaking R2-D2, it seems that BB-8 has the capacity to deliver Holographic messages too.

The message section of the app will use your smartphone’s front camera to record a number of video messages that are then stored locally within the smartphone app as holograms.

Then, after selecting one of your video recordings for playback, the screen will flip to display the field of view from your smartphone’s rear camera and will begin playing the audio of your hologram.

If you wish to see the video simply point your smartphone at the droid and a blue hologram will be projected within the 3D space on your smartphone’s screen, as though it was emanating from BB-8 itself.

BB-8 is the size of a small orange and the smooth round body and tiny magnetic head aren’t ideal for plugging a traditional charging cable into, so the droid comes with its own wireless induction charging cradle.

Three hours of charging will give you a full hour of play-time, but even in the cradle BB-8 will be beeping, squeaking and bopping it’s head around as though it’s eager to get out and roll around.

BB-8’s decoration was surprisingly difficult for Sphero, though printing on a flat surface is reasonably easy, the team actually had to develop a novel method to print onto a ball and Booth said that “it took us about 80 hits to get the decoration right.”

The holographic AR messaging, automatic robotic mode and the cute mannerisms of BB-8 make our first impression of this little droid an overwhelmingly good one, which will appeal to dedicated Star Wars fans, robotics enthusiasts, kids and techies alike.

While we’re yet to see just how influential this little droid is in the upcoming Episode VII film, the release of this toy means that we can indulge our imaginations in a galaxy far, far away while we wait.

The Sphero BB-8 will be available globally from September 4, with Australia being the first to get their hands on the droid at 12:01am for AU$250.