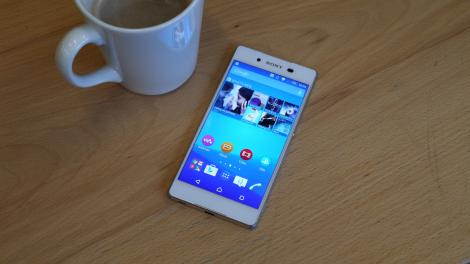 Editor’s note: We got hands on with a pre-production Sony Xperia Z3+ which wasn’t running final software. While the look of the handset won’t change, there may be minor cosmetic tweaks before it goes on sale.

The Sony Xperia Z4 is here! No, that isn’t a typo – I really did mean to type Z4. For this is the Xperia Z4, but as it’s the international version of the handset I’m having to call it the Sony Xperia Z3+.

Sony Xperia Z3 Plus is a much better name for this handset, as it represents only a very small incremental upgrade from the Xperia Z3 which launched around eight months before.

Sony has slightly tweaked the design, upgraded the power and given the front facing camera a bump, while the battery has been reduced in size along with the handset’s weight.

What the Xperia Z3+ does represent however is a fresh attack on the flagship smartphone market, allowing Sony to stay relevant in a market which now boasts the Samsung Galaxy S6, HTC One M9 and LG G4 along with the iPhone 6.

The Sony Xperia Z3 Plus release date is set for June 2015, although I’m still waiting to hear how much it’ll set you back. Going by the Xperia Z3 though this won’t be a cheap handset – one look at its competition tells you pretty much all you need to know.

Front-on there’s little in the way of change, although the front facing speakers have returned to the elongated, slightly hidden design from the Xperia Z2 – a choice I’m in favour of as the smaller speakers floating in the middle of the bezel on the Z3 looked a little lost.

The Xperia Z3+ has the same height and width dimensions (146.3 x 71.9mm) as its predecessor, but Sony has shaved off some depth with the handset coming it at a svelte 6.9mm.

It means it’s easy to hold in one hand and slide into the pocket of my jeans, although the battery has suffered with it getting cut down from 3100mAh to 2900mAh.

The battery does sport the benefit of quick charge – something the Z3 didn’t have – and Sony reckons you’ll still get two days of usage from a single charge. I’m not convinced, but you and I will have to wait for the full review to see if the claim rings true.

The small battery a slender frame has resulted in a drop of weight, and the Xperia Z3 Plus tips the scales at 144g. I found it to be a good weight, and it balanced nicely in my palm.

The corners and sides of the handset a nicely curved, allowing it to sit comfortably in the hand, and I found the centralised, circular power/lock key easy to hit.

The volume rocker switch just below it isn’t quite as ergonomic, and it feels just a little too low down on the side.

Something that will surely bring a smile to the faces of current Xperia Z series owners is the news the Xperia Z3+ has fewer annoying flaps over its ports. In fact, it’s got just one, located at the top on the left side of the device.

It’s responsible for keeping dust and water out of the nanoSIM and microSD card bay – with the two cards sharing a tray in order to reduce the flap count.

The tray itself is a piece of slightly flimsy plastic – not metal like the HTC One M9 or iPhone 6 – and I fear for its durability, especially if you’re someone who likes to switch memory cards a lot.

Sony has tried to overcome this as well, bumping internal storage from 16GB in the Z3 to 32GB in the Xperia Z3 Plus – giving you plenty of space without the need to expand.

What’s even more exciting though is the news the microUSB port on the base of the Z3 Plus is now uncovered at all times – meaning no more fiddling each night when you plug the charger in.

Sony has managed to dust- and waterproof the charging port, ensuring the Z3+ retains its IP65/68 rating.

Round the back you’d be hard pushed to tell the difference between the Z3 and the Xperia Z3 Plus, with the same 20.7MP camera and LED flash located in the top corner while the ‘Xperia’ and ‘Sony’ logos reside in the same positions along with the NFC image.

On screen it’s business as usual with Android 5.0 Lollipop coated in Sony’s own interface, although it’s not as heavy as HTC’s. The pull down notification window is stock Lollipop, with a two step action for notifications and then quick settings.

The multi-tasking screen is also stock Android, apart from the fact Sony has added a handy “clear all” key to the window making it easier to get rid of everything in a single tap.

General navigation through the interface felt fluid and quick on the Xperia Z3+, thanks to the sizable 3GB of RAM and new octa-core Snapdragon 810 processor – an upgrade over the quad-core Snapdragon 801 chip in the Z3.

I did find a few apps were a little slow to open and close, but this could be because the handset I was using wasn’t running final software.

A slight mark against the Xperia Z3+ is the number of apps Sony has pre-loaded. Above the standard phone applications, and Google’s suite, I counted at least 10 additional apps on the handset.

That’s not great, especially when the likes of Samsung have made a point of reducing the number of pre-installs that come on their devices.

Of course they’re not all useless, with Sony’s PlayStation and PSN apps likely to prove popular with PS3 and PS4 owners, while its LifeLog health and fitness app will appeal to the sporty among us.

The rear facing camera, as already mentioned, is the same 20.7MP lens Sony has used in a number of flagship handsets, but the Xperia Z3+ does benefit from Superior Auto+, which the firm claims will improve shots in all conditions.

A quick photo session during my hands on time revealed a quick, capable camera which has a handy physical shutter key on the right side – although you’ll have to wait for the full review to see how it stacks up against the competition.

More work has been done on the front facing snapper of the Xperia Z3 Plus, with a 5MP wide angled lens now on board.

This should make for better selfies, with more of your mates able to cram themselves in shot, while SteadyShot should ensure you’re not all a blurry mess.

The Sony Xperia Z3+ also promises faster internet with LTE CAT 6 support and Wi-Fi Mimo – both of which can provide higher bandwidth to your handset if it’s available.

The Xperia Z3 Plus I was using was connected to a Wi-Fi network and while web pages did load quickly, I wasn’t blown away by the speed – although I don’t know how busy the network was.

I wasn’t able to test the front facing speakers during my hands on time, but Sony has tweaked the technology behind them again to improve the quality and volume of the audio.

The changes made on the Sony Xperia Z3+ are minimal at best, and considering the Z3 was launched not so long ago it’s a little difficult to fully justify Sony’s persistence on its short reboot cycles.

Ignore the Z3 though and focus your attention on the Xperia Z2 and the Z3 Plus is a fine improvement with a much better design, fluid interface and strong front and rear cameras.

It also means Sony stays relevant against the Galaxy S6, One M9 and G4 – and the Xperia Z3+ is a handset it can be proud to have in its stable.