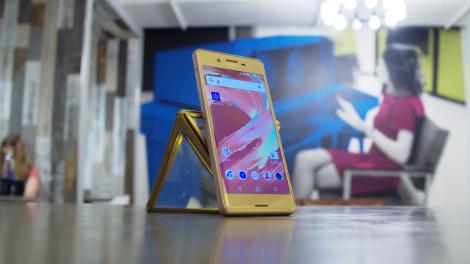 Like the others in the new X series, the Sony Xperia X Performance is really good at waving all the signs of a flagship phone.

Underneath the hood, though, there’s a mix of what you’d expect to find in a top-tier smartphone, along with a few unpleasant surprises.

If you’re seen one Xperia device within the past few years, you’ve seen them all. The Xperia X Performance falls neatly into that group, but it’s not a bad thing at all.

The eye-grabbing glass and brushed metal design make it enjoyable to look at and its 5.6-inch body fits nicely in the hand.

Especially for those in the United States, where Sony’s mobile division is attempting to branch out in a serious way, many haven’t spent a considerable amount of time, or any at all, with a Sony smartphone.

Minimalists will love the Xperia X Performance for its subtle design touches. In the rose gold review unit provided to TechRadar by Sony, the brushed metal back and edges nicely play off the slightly curved glass front panel.

The button and port layout is thoughtfully placed around the phone, and are simple to use and access during everyday use.

Given the fashion-forward look of the Xperia X Performance, it’s a delightful surprise that it’s dust and waterproof with a rating of IP68.

Moving onto the display, here’s where a bit of the disappointment settles in. It’s a 5-inch FHD screen running at 1920 x 1080. It’s totally competent for all sorts of media on and the X-Reality software feature is said to sharpen the image quality. But for as much as this device costs, we expect at least a 2,560 x 1,440 resolution.

And unlike the gorgeous, bezel-free look shown with the Sony Xperia XA, there’s a bit of a space between the rim and the screen here. Having spent time with the smaller, more affordable phone, we wish that design element would have translated to the flagship, but alas.

The spec sheet of the Sony Xperia X Performance is all over the place. At times, it looks every bit as flagship-worthy as its looks and price would indicate. While other times, it seems like a mid-range smartphone making it a bit confusing on the whole, given that this phone is being positioned at the top of the company’s 2016 offering.

Sony’s Xperia X Performance is stocked with a Snapdragon 820, which brings along with it the Adreno 530 graphics processor. You’ll find this hardware at the core of this year’s most popular smartphones, including the Samsung Galaxy S7, LG G5 and more.

Unfortunately, the phone offers 3GB RAM, which should be enough to provide a smooth experience, but we expect more. Not just because this is Sony’s top-of-the-line smartphone for 2016, but because it costs so much, too. The Nexus 6P gets along just fine with this amount of memory, but it costs much less.

There are some others specs worth hearing about, including the micro SD support, the 23MP rear-facing camera that promises to be something special, and it’s water-resistant build. These features alone are deal breakers for some, so we’re glad to see them here.

If we haven’t painted the most optimistic picture for the Sony Xperia X Performance, it’s because we’re not too thrilled about the rest of the components. The 1080p screen. The 2,700mAh battery that offers just a bit more juice than the world’s slimmest phone, the Moto Z, which has 2,600mAh.

Now, these choices would be excusable if the Xperia X Performance were competitive in price with some of the unlocked movers-and-shakers, like the OnePlus 3 or Nextbit Robin. But it’s not even close.

At US$699 (about £525, AU$922), this phone doubles the price of some more capable options, even costing slightly more than the Samsung Galaxy S7. It’s puzzling.

Sony’s website even erroneously states that the Xperia X Performance houses a fingerprint sensor within its power button. At least in the United States, it does not.

There’s a bright side to all of this, though. During our brief hands-on time with the Xperia X Performance, the experience is still a positive one and we haven’t noticed much in the way of slowdown.

This device runs Android Marshmallow 6.0.1, the latest, and probably final, update to the OS before Android Nougat lands in the autumn. We’ve reached out to see if this device will be on the upgrade list.

If you’ve used Marshmallow on another Android device, the first thing you’ll notice is how different the interface feels with Sony’s Xperia phones. It’s heavily customized; everything from the icons, to the many, many additional apps installed out of the box. Discounting a few apps that we’ve already downloaded, there’s almost 3GB eaten up by Sony’s own apps. Thankfully, you don’t need to use these services if you’d rather not.

We look forward to digging into these built-in apps and running it through its benchmark paces for the full review.

On paper, Sony’s top-tier device comes with a caveats, namely in the spec and pricing departments. You don’t seem to be getting a whole lot for the US$699 price tag.

We’ll have to test the device more to find out whether it ends up being worth the cash, but Sony’s big push into the US might need a little more “oomph” to make a lasting impact.