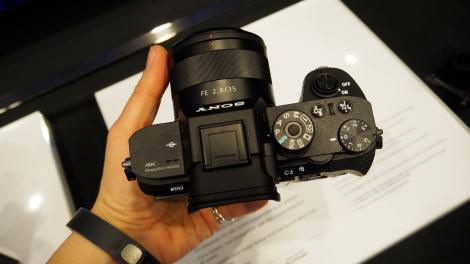 Sony has three full-frame compact system cameras – the jack-of-all trades A7 II, the high resolution A7R II and the high-sensitivity A7S. The A7S is the last to be updated, and it’s probably the most specialized of all. It sacrifices outright resolution with just 12 million pixels, but makes up for it with ultra-high sensitivity (up to ISO 409,600) and top-quality 4K video.

Like the A7R II, which we’ve just reviewed, the A7S II allows internal recording in the XAVC-S format with no pixel binning. Pixel binning uses neighbouring pixels to ‘improve’ the data for each photosite on the sensor, but it’s a type of mathematical interpolation that’s no substitute for proper, pixel-level data, and Sony claims this is one of the A7S II’s key technical advances. The XAVC-S format is the 4K equivalent of the AVCHD format used by Sony and others for efficient 1080 full HD video recording.

The power needed to capture full HD has a knock-on effect on lower resolutions, and the A7S II can also record full-HD footage at up to 120fps and at a bitrate of 100Mbps for super-slow motion playback. The bitrate is an indication of the compression applied to video footage and its subsequent quality.

12 megapixels may seem an insanely low resolution for a full-frame compact system camera, but the A7S II is designed for sensitivity rather than resolution. This is as clear an indication as you could ask for that resolution, sensor size and high-ISO performance are inextricably linked. In short, the only way to get good quality at super-high ISOs is with super-sized photosites on the sensor, and that inevitably means you get fewer of them.

The A7S II also adds Sony’s latest 5-axis image stabilization, so that in extremely dim lighting, where even its highest ISO settings still produce slow shutter speeds, the A7S II should still be able to get sharp hand-held images.

While the Sony A7S II has the same resolution as the original model, Sony says new noise reduction hardware and software gives better results at high sensitivity settings. This is also a designed as a professional video camera, and Sony has included its S-Log2 setting as well as its new S-log3 mode. These can increase dynamic range by up to 1300% by creating what looks like very flat looking footage initially, but which is designed for extensive post-capture grading. While S-Log2 is especially useful for preserving brighter tones, S-Log3 is designed to capture the maximum tonal range in shadow to mid-tone areas – this is the video equivalent of shooting raw files for stills.

Finally, the number of autofocus points has been increase to 169, and Sony says the A7S II has 2x faster autofocus response in video mode.

Sony’s original A7, A7R and A7S did draw some criticism for their design and layout, and in the Mark II versions, Sony has made some changes. The camera’s grip is bigger, the shutter release has been moved forward on to the top of the grip and the video record button is now on the side of the thumb-grip on the back of the camera – this makes it harder to press accidentally. In fact, though, it makes it harder to press generally, so you might want to set one of the two custom buttons on the top of the camera to start video recording instead.

The A7S II feels well made, though, and it’s comfortable to hold. It’s also tougher than the old A7S, with more magnesium alloy in its construction and a reinforced lens mount.

The menu layout is largely the same as the A7R Mark II’s, which we’ve already reviewed, and has the same high level of customisation available. However, it would be nice to have separate sections within the main menu for stills and video controls, and a second Function Menu for video options.

We haven’t been able to shoot any samples with the A7S II yet, but its predecessor was pretty impressive and the samples that Sony has shown us do look very good..

The A7S II does have fewer pixels than the A7R II and A7 II, so you won’t get the same level of resolution. But it’s easy to get caught up in megapixel hype and forget that not so long ago 12 megapixels was actually quite a lot – and it’s still enough to create high-quality A3 prints. This camera isn’t just about stills, though, but video too, and both 4K and Full-HD footage should have higher quality because they’re generated using the larger photosites on the A7S II’s 12-megapixel sensor.

We found that the original A7S controlled noise well, though the top ISO 409,600 setting came with such a drop in quality that it was best avoided. But it’s important to keep this in perspective – compared to typical consumer DSLRs and compact system cameras, this is a stratospheric level of sensitivity and it’s remarkable that the sensor can record images at this level in the first place. Sony says the A7S II has improved high-ISO performance and we look forward to testing this properly when we can get a sample for testing.

Sony is claiming a big improvement in the A7S’s autofocus capability too. We were shown a demonstration involving a stuffed toy in a dark box,and it did look good, while in more average lighting conditions it proved fast and accurate. Again, though, we’ll want to test this properly.

The A7S is a specialised, high-sensitivity stills/video camera and we’re told over half of the people who bought it are professionals. Sony already makes a cheaper general-purpose variant, the A7 II, and a high resolution model, the A7R II, so it’s able to target the A7S II at low light and video photography without the need to compromise it for a wider audience. The in-camera 4K recording brings it up to date – this was starting to look like a serious failing in the original model, and the faster AF and better noise control are a useful step forward.

The Sony A7 II is a better all-rounder and the the A7R II shoot higher-resolution stills, but if you need to specialize in video or low-light photography, the improvements in the A7S II look like an important update to an important camera.