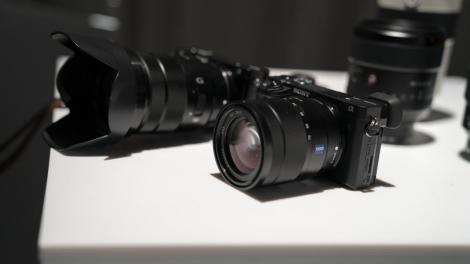 The A6000 has been long celebrated as the mid-range APS-C warrior in Sony’s line up. But, for almost as long as it’s been revered, photographers have long awaited its successor. Finally, after all the rumors of a A6100 and a higher-end A7000, Sony has introduced the A6300.

The Sony A6300 comes as a replacement to one of its most popular mirrorless cameras, with an improved sensor and exponentially faster autofocus speeds. What’s more, Sony has upped its video game on APS-C sensors with in-camera 4K and slow-motion video recording – plus, at long last, an external microphone jack.

With an affordable $999 (about £687, AU$,1,410) starting price for the camera body alone, the Sony A6300 looks like an incredible package that can easily take on other flagship cameras, like the Olympus OM-D E-M5 Mark II and Fujifilm X-Pro 2.

When Sony first established its EVIL (electronic viewfinder interchangeable lens) cameras, it went with a bold style unlike any device before it. However, as years have passed and Sony stuck with the same design, its Alpha-line now seems sedate and more focused on base functionality.

Compared to the retro revolution that has spurred the creation of systems like the Fujifilm X-T1 and Olympus Pen-F, the A6300 feels almost too simple. On this camera, you won’t find any unique dials except one for changing modes, leaving you to click the two dials (located on the top plate and rear panel) to change everything from exposure compensation to what file type you’re saving to the memory card.

Overall, the controls on the A6300 are exactly identical to the A6000. Users have access to a smattering of buttons, including digital shortcuts built into the rear dial and the ever-handy quick menu button. The only new addition is a switch that alternates one of the rear buttons from being a AF/MF toggle or AE lock.

That said, the A6300 isn’t without improvements. The camera is now entirely built out of magnesium instead of having a plastic rear plate as its predecessor did. Sony also gave the camera body the same ruggedized finish as the A7 Mark II, which should help the camera shrug off scratches much better than the glossy metal finish of the A6000.

Additionally, the camera body is more dust and moisture resistant, but Sony isn’t ready to call it weather-sealed yet.

While Sony’s cameras have never really been too impressive looking from the outside, they pack a ton of technology, and that’s couldn’t be more true of the A6300.

Though you might think the new 24.2-megapixel (MP) sensor might be the most important aspect of this crop sensor camera, the improved autofocus system is the most mind blowing thing about it.

Sony has managed to cram in a whopping 425 phase detection autofocus points – more than double compared to the A6000’s 179 AF points – spread across the entire imaging area. This allows shooters to basically track a subject from one end of the frame without experience any change in autofocusing speeds or reliability.

While the A6000 already felt plenty fast, able to focus in the span of a thunder crack, the A6300 can lock on a subject like the lightning that came before it.

The new AF system also enables the camera to switch to a “high-density” mode to track a fast moving subject and digitally surround it with a large number of AF points to track its motion more effectively. With the system active, I was able to easily track two boxers as they sparred, and the camera was able to stay locked on even as the two fighters switched positions.

To back up the extremely dense autofocus system, the A6300 can sustain a continuous shooting speed of 11 frames per second (fps) – even with continuous autofocus and exposure tracking turned on.

The camera sounds like a machine gun on full sprint, and Sony has also increased the burst rate to 8 fps while using the EVF or rear LCD. Again, this is another improvement from the A6000’s burst rate of six frames.

Speaking of the EVF, the A6300 sports a higher-res and a more vibrant OLED panel with 2.4 million dots of resolution. Sony is known for making some amazing looking screens, and looking through the new EVF is a real treat, thanks to the added contrast.

The EVF also boasts a 120 fps refresh rate, which ensures any action you see through the viewfinder is smooth and ghost free. The camera also happens to be able to shoot Full HD video at 120fps for slow motion footage.

Like Sony’s recently updated compact and hybrid cameras, the A6300 is also capable of recording 4K footage. Better yet, there’s a microphone jack for external audio recording devices, and the new unit will work with Sony’s XLR adapter.

As with still photography, the AF improvements carry over to video. Sony claims the A6300 will focus approximately twice as fast as its predecessor while shooting movies. Taken with the added audio support, these new features should make this already amazing video camera a better solution for any type of production.

The Sony A6000 is one of the most popular cameras of all time given all its features and affordable price. Now, the A6300 follows suit as the world’s fastest-focusing APS-C camera while offering improved video capabilities.

There hasn’t been a huge jump in resolution or ergonomics, but you can’t deny this is one helluva crop sensor camera. Add in the fact that the mirrorless Alpha lens lineup is truly maturing with its new series of G-Master glass, and there are more reasons than ever to jump aboard Sony’s train.