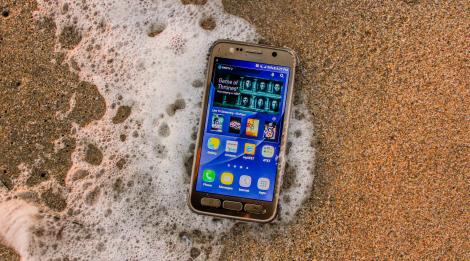 “What’s the best nearly waterproof, dustproof and shatterproof phone you can buy? Asking for a friend.” I hear this question all of the time, and it’s now easier to answer with the launch of the Samsung Galaxy S7 Active.

The S7 Active is a rugged Android phone that takes everything we loved about the Samsung Galaxy S7 and wraps it into a much tougher package that’s easier to grip and harder to break, just like last year’s Samsung Galaxy S6 Active.

Yes, there’s extra heft to this AT&T-exclusive phone, and you won’t find the bezel-free curved screen of the Galaxy S7 Edge to marvel at. But Samsung uses the increased thickness to its advantage in other ways.

In addition to being reinforced in every way imaginable, the S7 Active battery life is much better than what you’ll find within many of the best phones today. It’s at 4,000mAh, well ahead of the typical 3,000mAh that we often test.

I’m still testing out the Samsung Galaxy S7 Active for a full review, but I can already tell you my biggest complaint: the fact that it’s locked to AT&T and full of carrier-specific bloatware and app restrictions.

That means you won’t find it outside of the US and if you’re locked into a contract with Verizon, Sprint or T-Mobile, you’re going to have to switch networks in order to use this otherwise tempting phone. That can be costly.

Even if you’re already signed up with AT&T, you’re going to pay a lot. The Samsung Galaxy S7 Active price is nearly $800. Your “friends” clumsy tendencies sure are expensive.

There’s no need for you to buy a Galaxy S7 Active case because Samsung effectively suits up its new flagship Android phone in thick armor, replete with reassuring hard plastic and rubber corner bumpers.

Gone is the finely crafted glass-and-metal design of the Galaxy S7. It gives way to weatherproof casing that’s MIL-STD-810G military certified against some of the harshest elements.

It’s supposed to handle almost anything you throw at it: salt, dust, humidity, rain, vibration, solar radiation, transport and thermal shock. I threw it in the sand at the beach without thinking twice.

The S7 Active is not officially a waterproof phone and doesn’t claim to be, but it’s the closest you’ll get to one. It has an IP68 rating, so it can be submerged up to 1.5 meters (about 5 feet) for 30 minutes.

To get to this point, it has to be thick. I said that last year’s S6 Active was built like a tank, or at least a hard plastic humvee, and in 2016, the S7 Active is the tank that shops at the big and tall store (buying tank tops, of course).

New to this year’s S7 Active is a home button on the front that also acts as a fingerprint sensor. It’s fast and accurate, like its more delicate S7 counterparts. It’s just another way in which this phone is secure.

Returning are physical and texturized recent and back buttons that flank the new fingerprint scanner. They’re a little more spaced out this time around (before all three were bunched up near the center).

I like their bumpy feel and deliberate clickiness compared to the hidden and easy-to-mistakenly-hit S7 buttons that sometimes drive me crazy and always cause kind strangers taking a photo of me to accidentally exit to the homescreen. That’s not an issue here.

Despite its considerable size, the Samsung Galaxy S7 Active tries to blend in with Samsung’s 2016 lineup, at least in some variants. It comes Sandy Gold, Green Camo and Titanium Gray.

No one is going to mistake this for the more elegant looking Samsung Galaxy S7, but its gold and gray color hues do a better job at staying subtle compared to the GI Joe-like Green Camo version.

The Samsung Galaxy S7 already has the best display on a smartphone, so making it shatter-resistant with the S7 Active only means it’ll be around at the end of your AT&T contract.

It can withstand falls of up to five feet (which neatly matches its water submersion depth), and that’s great news for your trade-in value when you go to upgrade your phone in a year or two.

I was able to navigate the 5.1-inch touchscreen while outdoors (where this phone belongs) thanks to the high brightness Samsung is able to pull off on its Super AMOLED displays.

Its pixel-saturated Quad HD resolution pumps the 5.1-inch screen with more pixels than I actually need in a phone of this size, especially one that can’t fit into the Samsung Gear VR.

However, I can’t deny that watching videos and reliving snapshots taken with the 12MP camera on this display beats all others I have tested – with the exception of the S7 and S7 Edge, of course.

The Samsung Galaxy S7 Active takes one more cue from its more fragile brethren: it has an always-on display that shows the time, date and battery life percentage in a low-powered black-and-white mode.

“I don’t like to know what time it is,” said no one ever (outside of a clockless casino). Whenever I switch away from the S7, S7 Edge or LG G5, I miss this handy feature, and I’m glad it’s on the S7 Active.

Everything Galaxy S7 can do, S7 Active can do tougher. That’s the basic thinking behind this fumble-friendly smartphone that’s built using with the same specs and software.

It has a fast Qualcomm Snapdragon 820 processor, which is used by almost every Android flagship in 2016 in the US, with an embedded Adreno 530 graphics chip and 4GB of RAM.

There’s once again just one internal storage size, 32GB, but unlike last year’s Active phone, this one comes with a microSD card slot. It’s tucked away in the nanoSIM tray.

I’m able to expand the storage size with a 200GB microSD card, but making that adoptive storage with isn’t easy to do and not a part of the Samsung hardware by default.

That means the microSD card is mostly meant for photos and music, not offloading apps and games. Adoptive storage basically melds the internal storage and memory card together.

This phone does have Android 6.0 Marshmallow, however, with Samsung’s TouchWiz interface overlaid on Google’s operating system. It’s actually clean and simple to use.

Samsung’s operating system tweaks gets a bad rap even today because it was teeming with features that no one needed on the S5 on backward. But that’s changed, trust me.

There are even features here that you won’t get on stock Android, like splitscreen apps. That’s coming to Android N, but Google’s software is still in beta.

Samsung does include a number of its own apps, like Samsung Pay and the ingeniously descriptive Internet, which can’t hold a candle to the Google Chrome app that’s tucked away in a folder.

It also secretly forces pre-installed Galaxy Apps on you, like Facebook, instead of using versions downloaded from the Google Play Store. That doesn’t bother me too much.

It’s the AT&T apps and advertisements that get in the way of my enjoyment of this phone. It’s full of DirecTV notification shade banners and needless maps apps that no one actually uses sanely.

Disabling these apps and widgets is a pain, but I’m really missing out on what I can’t enable: HD video calls to people on other carriers using the button that’s a part of the dialer app.

Even if your friend has the same exact phone, they need to be on the same network, too. And there are only four other non-S7-related phones that are on the AT&T HD Calling list… and one outdated LG tablet.

This really hurts both Samsung and Google in their effort to take on Apple’s much easier FaceTime setup.

There are many reasons the Samsung Galaxy S7 Edge and S7 are on our best phones list, taking spots one and two respectively, and one of the bigger reasons is their amazing cameras.

The S7 Active, from my early testing, does really well here too, with the same 12MP camera that uses a 1/2.6-inch sensor, f/1.7 aperture and larger 1.4 µm sized pixel.

It checks all of the boxes with faster phase detection autofocus, optical image stabilization and a bright LED flash on the back. Even without the flash, it does well in low-light, just like the S7.

On the front, it’s a 5MP camera and includes the same great f/1.7 aperture for selfies. I really like the fact that Samsung’s cameras capture wider angles compared to anything the iPhone camera can do.

There’s more testing to be done, though, I haven’t noticed any differences between the Galaxy S7 Active and the Galaxy S7 Edge I always carry around.

There’s undoubtedly a difference when it comes to the Samsung Galaxy S7 Active battery life. It not only lasts all day, but so far, I’ve found that I can almost make it to a two days with normal use.

That’s all thanks to the new 4,000mAh battery capacity that takes up the most space within its 9.9mm thick confines. There’s no need for a Mophie when you’re carrying the S7 Active.

With heavy use, I’m still on track to get great all-day battery life, whereas using GPS-enabled map apps and constantly looking up information when traveling on other phones has my battery depleted in 12 hours.

The always-on display does eat a tiny bit of battery life, even with its low-powered architecture, but it’s not as big of a problem here as it is on the Samsung Galaxy S7.

The Active also contains fast charging, so while the bigger battery does take longer to charge, it’s not a long wait given the right Fast Charging adapter and a supported micro USB cable.

I’ll update the battery life test and recharging times while I lab test them for the final S7 Active review.

Samsung Galaxy S7 Active is the ultimate travel companion for people who care about their smartphone. It’s ideal for any hike or outdoor adventure.

You won’t worry about dropping, wetting or dirtying it thanks to its bulky, but military-certified design, and the display is easy to use in the sunlight. Don’t worry about slowdown, either. This is a beast on the inside just as much as it is on the outside.

Once you reach whatever peak you’re trying to climb, figuratively or literally, you can capture the world around you with with its amazing 12MP camera. It even works well in low light conditions in case you’re running late to the mountaintop – which you would know about thanks to the always-on screen with the time on it.

As much as I like the Samsung Galaxy S7 Edge, for a day at the beach, I’d rather take the S7 Active with me. It’s more practical outside of its high price and AT&T network limitations.