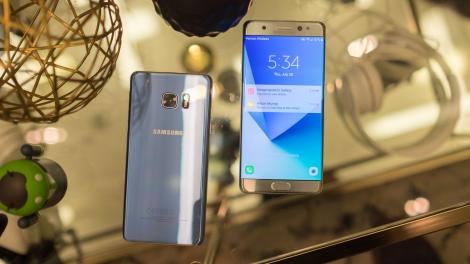 The Samsung Galaxy Note 7 is a phone that’s designed for a very specific user base: those who want a larger screen but are craving a stylus too. That’s not to say others might not get some benefit from it, but it’s mostly centred around the functionality of the S Pen.

The S Pen is, indeed, back again, and comes with more features and tricks to justify its existence. I’m still not sold on the point of it, but there are those out there who crave its unique feature set, it seems –50,000 signed a petition to bring the Note 5 to Europe, for example.

(By the way, if you’re confused about the naming, the Note 6 moniker was skipped over so Samsung could bring its S and Note ranges onto the same numbering system, rather than making its yearly heavyweight phablet look last-generation before it’s even announced).

There are some other cool elements here though: the screen is once again the most advanced on the market, gaming is faster than ever, and there’s additional security offered through new biometric sensors.

Still, I can’t shake the sense that the Note 7 is a phone that doesn’t stray far enough from the excellent Galaxy S7 Edge – but then again, I wouldn’t sign a petition to bring it to Europe when that territory already had the decent Samsung Galaxy S6 Edge+.

The Note 7 does feel like an incremental improvement over the S7 Edge, taking in some updates to the S Pen and making the new phablet feel more business-like and, well, grown up.

One thing I love on the Galaxy S7 and S7 Edge was the always-on display, which showed a static image of a clock, calendar or image so you don’t need to keep switching on the phone to simply see routine updates. And with the S Pen you can now write directly onto the almost-blank screen – it’s like you’ve always got a piece of paper and a pen to hand.

Your scribbles can then be pinned to the front screen as a reminder, or saved to your notes for looking back at later – not having to open the Notes app every time you want to jot something down seems to be a real win here.

There are some new always-on display images to check out, such as space images – and the good news is that these have already come to the S7 range, via a recent update.

The main changes to the S Pen’s toolbox are adding a GIF maker, the ability to instantly translate text, the option to magnify the screen and – for some reason – the ability to paint directly from the Notes app and then blend those colors as if they’re real oils.

The latter feature is a neat trick, although it doesn’t feel like something that’s going to change the world – I’m thinking the notes section is going to be more used as a to-do list rather than an entertainment centre – but I’m really impressed that Samsung is still looking to enhance this area, and keep making it more attractive to a wider selection of users.

The Magnify option feels rather pointless; I get that it can be used to help accessibility, and that’s a great thing, but so much of this phone’s UI is small and precise to make use of the S Pen’s direct input, so it doesn’t feel that user-friendly in that case.

It’s the same with Translate – it’s a cool feature to have, but there are equally good apps out there which can do the same thing. I’m on the fence with this one, as I’ll be interested to try it out and see how often it really does come in handy.

The GIF maker is another contentious issue. My colleague loved the idea, as it gives you a granular level of control frame by frame, and you can add stickers and other pictures over the top for the ultimate in social network sharing.

But you can only use it to pull GIFs off video, not capture the screen as you’re working, which feels more like the sort of business-like implementation you’d expect here – it’s a shame that’s missing.

The Samsung Galaxy Note 7 is – like the Galaxy S7 – IP68 rated, which means you can lob it around i the dust and water. However, the screen has been retooled to support the S Pen even underwater, meaning that with water drops all over the screen you’ll be able to take some notes.

Are you desperate to make lists in the rain? Well, then the Note 7 will work perfectly for you.

The user interface is a lot more muted than the colorful overlay on the Samsung Galaxy S7 range, which again makes it feel like Samsung is leaning the Note 7 towards a more business-like audience; one that doesn’t want to be seen with a device that’s too ostentatious.

Then again, you can get it in a silver option that’s clearly more gold (we’re not sure how that’s come about either), so perhaps being a little more bling is on Samsung’s roadmap.

The 5.7-inch screen is larger than anything in Samsung’s current range though – with the S7 Edge side by side it looks very much the big phablet of the group that we expected.

Next to the iPhone 6S Plus it seems smaller and more refined, despite packing in so many more pixels and a larger display.

That display also comes with a big headline element: mobile HDR. For the uninitiated, this means you’re getting a screen that can display dark areas and bright zones equally well – as long as the content is filmed that way.

More studios are filming in this format each year, with Netflix and Amazon being big supporters of the technology, and now you’ll be able to get those benefits on the go too.

Right now, though, there isn’t a whole host of mobile HDR footage out there. It feels a bit like when Sony launched the Z5 Premium with the 4K screen… yes, there is Ultra HD content coming, but it’s not being piped into your phone at the moment.

I couldn’t see the larger screen on the Note 7 benefiting from the tech in general use, but that could be because the Super AMOLED technology Samsung is using these days is so good that it’s hard to see the incremental improvements.

It’s hard to know precisely why Samsung decided to bring iris scanning to the Galaxy Note 7 – it feels very much like a luxury addition when there was already something good there. The fingerprint scanner is present and correct, and is as swift as ever: press the home button to wake the phone and you’re already into the main display – exactly what you want to see.

But with the iris scanner, you need wake the phone, swipe right and then place the phone perfectly in front of your face to make it work. Yes, when it’s held in the right position it works instantly – and that’s mega impressive – but it was too erratic in my early tests for me to see it as a winning feature – especially when there’s already a great security feature right there in the fingerprint scanner.

Perhaps you can argue that the iris scanner is more secure, as it comes with 200 points of recognition over the approximately 80 for a fingerprint. But neither are flawless, and given that this is just a safer way to avoid having to put in a PIN, I’m not convinced.

I suppose if you have wet fingers A LOT (wait… what are you actually doing? You’re not a dolphin trainer) then this could be a good alternative – or if you could use it by simply lifting the phone up to your face, without having to wake it first. But as it stands, it feels a little bit like a feature for the sake of it.

That said, you can put a fun cartoon mask on the iris-scanning screen if the night-vision eyes scare you too much.

The design of the Samsung Galaxy Note 7 is pretty impressive – it’s like the S7 Edge, but slightly refined to cater for a new audience. There’s a slimmer curve into the metallic rim around the edges, and the back is curved into the same frame.

The Note 5 had the curved rear, as does the Galaxy S7, but the combination of front and back is more reminiscent of the S7 Edge. It’s not quite as pronounced and smooth, which is a shame, but it does mean fewer accidental taps of the screen.

The edge display is on offer though, which is great, as you can add in your favorite apps and shortcuts to quickly get to things that matter to you – and hopefully more elements to download to here will appear soon, as Samsung expands the feature.

In terms of specs, things are a little confusing – in the US you’re getting a Snapdragon 820 CPU, which is quad-core, but the UK and other parts of the world will be getting the Exynos option instead (Samsung still hasn’t confirmed which model this will be), to deliver a little more power.

There’s 4GB of RAM backing up both CPUs, and 64GB of internal storage, with the option to expand that by up to 256GB with a microSD card.

One of the surprising additions here is a USB-C port, which is something the brand decided against just a few months ago for the new S range – apparently the technology has matured enough in that time to make it worth including here.

That means faster data transfer and charging – and don’t worry about having to upgrade all your leads, as there’ll be an adaptor in the box. Phew.

The camera is largely the same as the one found on the Samsung Galaxy S7 and S7 Edge – which means a 12MP snapper with optical image stabilisation and the customary bump on the back to allow for the larger sensor.

It takes the sort of great pictures you’d expect from a Samsung handset, and as fast as you’d expect, and you can flip between the modes really quickly with a flick of the finger. The South Korean brand has been working hard to make the user interface more one-hand-friendly, and you can easily flip between filters and the front-facing camera now.

The battery is confusing though: it’s 3500mAh, which is smaller than the Galaxy S7’s (although bigger than the Note 5’s from last year), despite being in a bigger chassis.

I can only assume this is because the S Pen takes up a lot of room down the side… but it does mean that battery life will be compromised. That said, the Note 7 will charge up super-fast – and the wireless charging options mean it’ll start topping up the instant you pop it down on a charging pad.

The Samsung Galaxy Note 7 is all about refinement, while bringing a key product line back to the whole world. The S Pen is a great addition for those that like the precision it brings, and some of the new features seem fun, if not exactly indispensable.

The iris scanner doesn’t seem to have much of a point to it at the moment, as it’s too slow and doesn’t seem to add much over the fingerprint scanner that’s already there.

But with a brilliant camera and a design rebooted slightly, as well as IP68 waterproof smarts, it’s hard to see how anyone is going to dislike this compact, yet intensely, powerful, phablet.