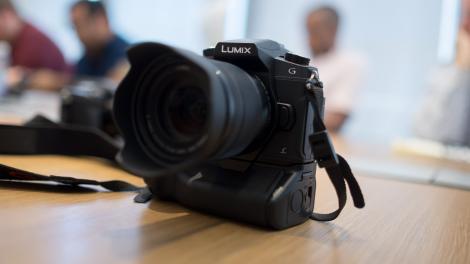 Panasonic is arguably one of the biggest names in video right alongside Canon and Sony and now its further cement its name in the market with the mid-range Lumix G85 (or G80 as it’s known in the UK). The new Lumix G85/G80 isn’t meant to be a replacement for the Lumix G7, but rather to sit above it with a redesigned magnesium body and video-oriented features for pros.

At first glance the Lumix G85 looks exactly like the Lumix G7, but Panasonic has made subtle changes for a more aggressive silhouette and futuristic impression.

The camera has also gone through a series of improvements including a magnesium front panel that helps make it feel a bit more solid in hand and reduces vibrations at the same time. Additionally, Panasonic has added weatherseals to make the camera dust and splash-proof.

The grip is also larger and extends farther from the camera’s main body so you can really wrap your fingers around it. That said, the extended grip doesn’t make the G85 look any larger than its entry-level predecessor.

The G85 also corrects a few misgivings we had with the G7 including adding support for a battery grip has and relocating the SD card slot from the battery compartment to the side of the grip. Still photographers will appreciate the electronic viewfinder has been upgraded to an 0.74x magnification 2,360K dot OLED display that follows a 3:2 aspect ratio rather than 16:9 standard on the G7

Controls-wise you’ll find most of the buttons and dials are in the same place as they were on the G7 along with a few new ones. There’s a new focus mode lever and a new button built into the rear dial that allows shooters to switch between adjustable functions.

For the most part Panasonic has ported the internals of the GX85/GX80 to the G85/G80. This includes everything from the 16MP Micro Four Thirds MOS sensor without a low-pass filter, the same redesigned shutter mechanism with a durable magnesium frame to 5-axis sensor-shift stabilization system dubbed Dual IS 2.

Not that we’re complaining. Each and everyone of these components have proven their worth in the Lumix GX85.

The image quality of the rangefinder-style camera tops other Panasonic cameras equipped with a 16MP sensors with an anti-aliasing filter. Likewise the shutter mechanism has helped dampen shutter shock, which was an issue with the Lumix G7.

Panasonic is also introducing a fair number of innovations with the G85 including an electronic first-curtain shutter to further reduce shutter vibration. Battery life has been boosted to 330 shots – or three time longer by Panasonic’s estimates – thanks to going with the larger 1,200mAh battery.

You’ll also get a bit more buffer with the G85, allowing you to capture up to 45 RAW (or 300 JPEG) images while shooting in continuous mode at 9fps with AE and AF locks turned on. Panasonic’s suite of 4K photo modes makes their appearance here, but for their easy convenience they essentially turn the 16MP sensor into an 8MP shooter.

Experienced shooters will more likely gravitate towards just shooting 4K videos at 30p and 24p or 1080p footage at 60p.

During our hands on time with the camera, Panasonic only gave us a few moments to shoot with the G85 but overall we were pleased with the quick operation of the G85.

Autofocus felt snappy in the sun bathed meeting for photos and racking focus in video couldn’t be easier with the articulating 1,040K dot touchscreen. However, a real test of the system’s capabilities will have to come with night shooting and faster moving objects.

On paper, Sony and Olympus still hold a strong lead over Panasonic especially when the G85 only comes with 49 Contrast AF points. By comparison, the Olympus OM-D E-M5 Mark II 81-point Contrast AF is nearly twice as dense and the Sony A6300 comes with a whopping 425 phase-detect points and 169 contrast-detect.

The Lumix G85 is a compelling camera that integrates all of Panasonic’s smartest tech into one digital SLR-styled camera. If you’ve been chomping at the bit for the Lumix GX85, but can’t stand its rangefinder styling this is the camera with you. Plus it comes with weatherproofing and a more robust proof body to boot.

Although, its 16MP sensor lags behind the 20MP Lumix GX8, the G85 has a substantial buffer that will please still photographers and the same 4K video capabilities. Altogether, the Lumix G85 is arguably one of the best packaged cameras Panasonic has ever made, however, looking beyond the company’s own portfolio introduces some strong competitors with the Olympus OM-D E-M5 Mark II and Sony A6300.