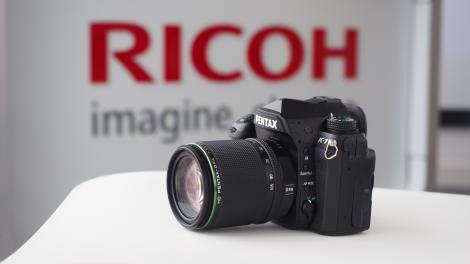 Pentax is one of the big traditional photographic brands to make the transition from film into digital camera manufacturing and it always seemed likely that it might one day make a full-frame digital SLR. However, it wasn’t until February 2014 that the company announced that it was planning to take that step. And now, after two years of seeing mock-ups under glass domes at trade shows, we finally have the Pentax K-1.

Pentax likes to make good use of the ability to shift a camera’s sensor and it’s no different with the K-1. The primary purpose of the technology is to compensate for accidental movements and the Shake Reduction II system acts across 5 axises, having a claimed 5-stop impact. There’s also the clever Astro Tracer system which uses data from the GPS system to guide the movement of the sensor during exposures up to 5 minutes to record stars as sharp dots rather than streaks. And not to forget the sensor-shifting composition adjustment and level correction options.

Pentax’s Shift Resolution system is also on hand to produce better colour by allowing each pixel to record the full colour information. This works by taking four images in quick succession, with the sensor moving by one photosite’s width between each shot. Pentax has improved the system to the extent that it is now claimed to be usable when the camera is hand-held and with moving subjects. Nevertheless the company still recommends using a tripod for the best results.

Although the PRIME IV processing engine is said to be 50% faster than PRIME III, the K-1 can only muster a maximum continuous shooting rate of 4.4 frames per second (fps), so it’s unlikely to be the first choice of serious sports photographers. Video recording is also a little limited with Full HD (1920×1080) maxing out at 60i/30p in the H.264 format. There is however, a mic connection and headphone port as well as the ability to shoot 4K timelapse sequences.

One benefit of the new processing engine is that it enables a new noise reduction algorithm to be employed and this and the larger pixel size enabled by the bigger sensor has given Pentax the confidence to allow a maximum sensitivity setting of ISO 204,800 at a native/standard setting.

Metering is handled by an 86,000-pixel RGB sensor which supplies data to the Real-Time Scene Analysis, keeping an eye on subject colour and brightness.

Being an SLR, the K-1 has an optical viewfinder. Pentax has opted for the high quality pentaprism type rather than a pentamirror and it gives 100% coverage. On the back of the camera there’s also a 3.2-inch 1,037,000-dot LCD that’s mounted on a novel tilting mechanism – more on this later.

It hardly needs saying these days, but the K-1 has built-in Wi-Fi connectivity that allows images to be transferred to a smart phone or tablet or for the camera to be controlled remotely. There’s also the GPS unit mentioned earlier and digital compass to record which way the camera is pointing when a shot is taken.

I haven’t been able to shoot with the K-1 for a long period of time yet, but I found its grip to be extremely comfortable to hold. It’s nice and deep from front to back so your fingers have room to reach down, yet it’s not too wide so your fingers aren’t stretched. It’s also well-sculpted and the textured coating is very tactile and ‘grippy’. Meanwhile on the back of the camera there’s a slim but ergonomic thumb-ridge which, in combination with the front grip, makes the camera feel very safe in your grasp.

Overall the camera feels well made and durable thanks to the magnesium alloy construction. In addition, the dials are nice and solid, with a good level of torque. And as we expect with Pentax, all the controls, joints and ports are sealed to prevent the ingress of dust and moisture. This is a camera that you shouldn’t have to put away if it starts to rain when you’re out on a shoot. It also continues to operate down to -10C.

The K-1 is designed for enthusiast photographers who want to take control of their camera and adjust settings on a frequent basis. Consequently, it has a liberal covering of buttons and dials to give fast access to key features. A new Smart Function Dial on the top-plate is especially useful with marked settings for Shake Reduction, Grid Display, HDR, Bracketing, continuous shooting speed, sensitivity, Wi-Fi and APS-C format Crop. Once you’ve turned the dial to the appropriate option, the desired setting is selected using another (unmarked) dial on the top-plate. It’s also possible to set exposure compensation by pressing the dedicated button and rotating the dial on the back of the camera near the thumb-rest.

The standard information display on the main screen is clear and it changes promptly as settings are altered. Pressing the Info button on the back of the camera activates a screen that shows 20 features that can be adjusted. These are small and the purpose of some is not immediately clear.

One criticism we’ve levelled at Pentax SLRs in recent times is that their menus look dated. The same can be said of the K-1. It’s not a major issue, but it’s still a fact. The menu icons are also small and not always especially helpful. As with the information screen, time and use will reveal the icon’s purpose and they will become familiar, but it could lead to some confusion or frustration in the early days. Of course a key reason for sticking with this interface is to help users who want to upgrade or swap between cameras on a frequent basis. This could be addressed with firmware updates, but they take time and money.

The K1’s viewfinder is nice and bright, giving a slight boost to contrast and a little warmth to the scene, making it look slightly more photogenic than it is in reality. There’s a visible fine-grained texture and from some angles there’s even a faint radiating pattern of concentric circles.

Images can also be composed on the 3.2-inch 1,037,000-dot LCD, which provides a clear view. This is mounted on an unusual tilting mechanism which enables it to be pivoted around through 35 degrees horizontally and 44 degrees vertically. It can also be pulled out for waist-level shooting. A tilting or vari-angle screen is sometimes considered a weak point on a camera, but I was encouraged to test the strength of the K-1’s mechanism by holding the screen while dangling the camera beneath, swinging it around to test the movement. It certainly proves the point, and it didn’t feel like it would give way or detach easily.

We have been impressed with the quality of images from Pentax’s recent SLRs. They strike a good balance between detail and noise visibility. They also tend to produce rich, natural colours. It’s going to be interesting to see how well the K-1 controls noise at ISO 204,800 – could it be a genuinely useful option?

When we tested the K-3 II we found a measurable improvement to detail resolution and colour reproduction when using the Pixel Shift Resolution system. It was harder to see an impact with real world shots though and I’m intrigued to see if this is still the case with the K-1. I’m also looking forward to testing the system with moving subjects to see how well it comes with them and if it makes it a feasible option for shooting landscapes with moving water or vegetation. Landscape scenes often include prime examples of subtle colour transitions and fine detail, so they could stand to benefit quite a bit from Pixel Shift Resolution.

Pentax cameras and lenses aren’t the natural choice of sports photographers because they’re not known for their speed of automatic focusing. However, with the right lens the AF system can be pretty snappy. I tried the K-1 with a final sample of the new Pentax D FA 150-450mm f/4.5-5.6ED DC AW and it proved pretty responsive even though I was shooting through a window towards a murky, low contrast subject.

I like the K-1. I’ve only used a pre-production sample for a relatively short time and I haven’t been able to examine any images from it on a computer, but I like it. It has an excellent collection of features that will appeal to serious photographers and the handling seems very good.

In addition to headline features like the 36Mp full-frame sensor, Pixel Shift Resolution and Shake Reduction II, it also has some really nice touches. The GPS, which enables images to be tagged with location data, for example, can be turned on and off with a press of the dedicated button. That’s great news if you’re worried about draining the camera battery quickly but would like to tag an image or two.

There are also LED lights to make the camera easier to operate in the dark. Plus the Smart Dial on the top of the camera gives a means of adjusting settings quickly and there are plenty of shortcut buttons so you don’t have to delve into the menu too often. There’s also quite a bit of customisation available so that you can set up the camera to meet your preferences.

Aware that it is quite late to full-frame digital photography, Pentax has given the K-1 an attractive price. It’s not cheap, but it compares favourably with the like of the Nikon D810, Canon 5D Mark III and Sony Alpha 7R II. One big question, however, is has the company left it too late?