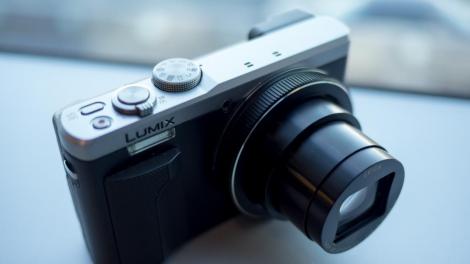 Had Panasonic followed its normal course of action and announced its upgrade to the TZ70 (ZS50) at the same time as an upgrade to the TZ57 (ZS45), the TZ80 would probably have attracted a lot more attention than it’s likely to at the moment. However, rather than filling the TZ70’s shoes as the top-end travel zoom compact in Panasonic’s TZ line-up, the TZ80 is set to play second fiddle to the TZ100. The reason being, the TZ100 has a sensor that is 4x larger than the 1/2.3-inch device in the TZ80 and its predecessor the TZ70.

Interestingly, a year after Panasonic reduced the number of pixels from 18 million on the TZ60’s sensor to 12Mp on the TZ70’s, the company has opted to boost the pixel count back up to 18 million for the TZ80. However, we’re told that although the pixel pitch of the new camera’s sensor is a little smaller than that of the TZ70, the photoreceptors actually have the same sensitivity. This should mean that noise levels are about the same, or slightly better than the TZ70 as the processor is new. However, Panasonic hasn’t upped the full sensitivity range of the TZ80 over that of the TZ70 and it has a native range of ISO 80-3200, with ISO 6400 available as an expansion setting.

Apart from this change to the sensor and the addition of 4K video recording, 4K Photo mode and Post Focus mode, the TZ80 is essentially the same as the TZ70. Crucially, the lens is the same Leica DC Vario-Elmar 4.3-129mm f/3.3-6.4 optic which has a 35mm focal length equivalence of 24-720mm. It’s one of the main attractions of the TZ70 and it’s bound to be an enticing feature for many who want a versatile camera that can be used to shoot cramped interiors or distant details.

Like the TZ70, the TZ80 also has a 0.2-inch 1,160,000-dot electronic viewfinder and a 3-inch 1,040,000-dot screen, but Panasonic has reprised the touch-control that went AWOL for the TZ70 and TZ60. Autofocusing is also claimed to be improved with the arrival of Panasonic’s DFD (Depth From Defocus) technology which is seen in its latest G-series compact system cameras to help get subjects sharp quickly.

As in the TZ100, there’s Wi-Fi connectivity for sharing images quickly and controlling the camera remotely, but no NFC chip to make quick connections to an NFC device.

Although it’s not absolutely identical to the TZ70 that it replaces, the TZ80 is very similar in appearance. The front grip is stepped and, though shallow, pretty effective, while the rear thumb-ridge has a more defined edge that gives nice purchase. The control layout is the same, although by default the button just below the thumb-rest on the back of the TZ80 is for accessing the 4K Photo options and is marked as such rather than being used to activate the Wi-Fi system as it is on the TZ70.

Like the TZ70, the TZ80 has a control dial around the shortcut and navigation pad on the back of the camera, a control ring around the lens and a mode dial on the top-plate that gives quick access to shutter priority, aperture priority and manual exposure modes as well as the array of automated shooting options.

There are no surprises, and although the TZ80 is aimed at relatively experienced users looking for a back-up to their SLR or CSC, or a more versatile camera than is available on the average phone, it’s unlikely that inexperienced users will struggle and should get to grips with it with a few minutes. The iA option on the mode dial is the get-out-of-jail option that sets everything to automatic.

As with the TZ70 and TZ100, the TZ80’s electronic viewfinder is small, but useful. It doesn’t take long to get used to peering into it and it should be useful in bright sunlight when it can be hard to see an image on the main screen. The 3-inch screen also provides a decent view and as it’s the same one as on the TZ70 we can be confident that it won’t suffer excessively from reflections. What is different, however, is the touch-control. This proved very responsive in the pre-production camera that I got to try prior to the camera’s announcement.

While much of the TZ80’s specification is the same as the TZ70’s, the most crucial elements for image quality – the sensor and processing engine – are new. This means that we will have to wait and see what the detail and noise levels are like when we get a full production sample in for testing. We had some concerns about smoothing in images taken at sensitivity settings as low as ISO 160 with the TZ70 and we’ll be checking shots carefully from the TZ80 – especially bearing mind the increase in pixel count because this could result in more noise.

We preferred the slightly less vibrant tones that the TZ70 produced in comparison with the TZ60 and I hope that this will continue with the TZ80.

The TZ70’s autofocus system is pretty good for a compact camera and I’m looking forward to seeing how much improvement the DFD technology brings.

The TZ80 has an attractive specification and the increase in pixel count over the TZ70’s is bound to give it greater appeal in some quarters. However, it’s important to consider the impact that this has on low light performance and noise control – something we plan on investigating carefully when we get a sample in for review.

The TZ80 is the cheaper of Panasonic’s two new travale cameras. However, although the TZ100 is set to be £170 (around US$257/AU$354) more expensive than the TZ80, it has a sensor that is 4x bigger and therefore has much larger pixels, which should mean it is better able to keep noise in check. The TZ100 is only a little bigger than the TZ80 and it can be squeezed into a similarly sized pocket, making it an attractive option for those willing to forgo the huge zoom range of the TZ80 and take the financial hit.