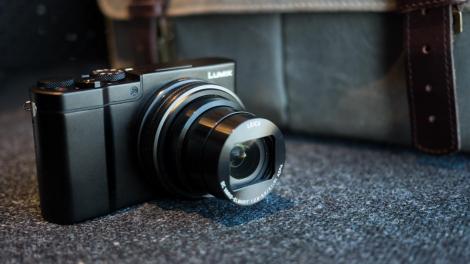 Panasonic entered the digital camera market in 2001 and in 2006 the company produced the first of its popular TZ range, a series of cameras with a small body and a large zoom range designed to appeal to travellers. The cameras have proved a big hit over the years and with the shift towards more high-end features in compact cameras Panasonic has decided to raise its game with a new model, the Lumix DMC-TZ100.

This immediately raises it above the level of rival travel cameras. This is the same sensor as is found in Panasonic’s top-end bridge camera, the very successful FZ1000. In the TZ100 it’s combined with a new Venus Engine processor and a Leica DC Vario-Elmarit 9.1-91mm f/2.8-5.9 lens which has a 35mm equivalent focal length range of 25-250mm. There’s also Panasonic’s Power OIS stabilization system for stills photography and 5-axis hybrid OIS stabilization for video.

Despite the increase in pixel count over that of the TZ70, the fact that the sensor is 4x larger in the TZ100 means that the pixels are 2.4x bigger, which should be very good news for image quality and noise control in particular. This has given Panasonic the courage to give the TZ100 a native sensitivity range of ISO 125-12,800, and there are also expansion settings of ISO 80, 100 and 25,600.

Given Panasonic’s enthusiasm for all things 4K, it’s no surprise that the TZ100 has 4K recording capability (at 30 or 25 frames per second) and the 4K Photo modes are present to make it easier to shoot 8Mp still images at 30 frames per second (fps). There’s also Panasonic’s latest addition to the 4K fold, Post Focus mode. In this mode the camera takes a sequence of images with different focus distances and you can choose the shot in which your subject is sharp post capture.

In addition, the TZ100 has 4K cropping which enables the composition of 4K footage to be improved and down-sampled to Full HD in-camera.

Viewfinders are making a welcome comeback to compact cameras and the TZ100 has a 0.2-inch 1,160,000-dot electronic viewfinder built-in to make it easier to compose images in bright ambient light. Naturally this is accompanied by a larger screen on the back of the camera and in this instance it’s a 3-inch 1,040,000-dot unit that is touch-sensitive. Helpfully there’s an eye sensor to detect when the camera is held to the eye to switch off the main screen and activate the EVF.

Another cherry on the specification cake is the fact that the TZ100 can record raw files as well as JPEGs. This sits well with the aperture priority, shutter priority and manual exposure modes that accompany the automated shooting options. Also, shutter speed may be set to 60-1/2000sec when the mechanical shutter is in use or 1-1/16000sec electronic shutter is operational, so it should be possible to freeze very fast movement and use the widest aperture in bright light.

Interestingly although Wi-Fi connectivity is present, NFC technology is not – Panasonic says that this hasn’t proved as widely used as expected.

One of the most exciting aspects of the TZ100 is that it’s not a great deal bigger than the TZ80 announced at the same time, or the existing TZ70. It’s about 6mm (0.236-inches) thicker than the TZ80, plus 2.2mm (0.0866-inches) longer and 0.5mm (0.0197) wider. It’s just about small enough to slip in a jeans pocket and it has metal body shell that feels solid enough to suggest it would survive being carried that way.

Design-wise the TZ100 looks similar to the LX100, with fairly clean lines and a step in the top-plate. The camera will be available in black or black and silver finishes, with the black and silver version having a red band around the small silver portion of the top-plate. While this is attractive, it’s a new styling for Panasonic so it will be interesting to see if this appears elsewhere in the future.

On the top-plate there’s a large mode dial giving access to the exposure modes, including the fully automatic Intelligent Auto and a collection of automated and scene modes along with the more advanced program, aperture priority, shutter priority and manual options. There’s also a large dial on the top-plate that’s within easy reach of your right thumb for making settings adjustments, as well as a control ring around the lens. The purpose of the ring depends what mode you are in, but in aperture priority its default setting is to adjust aperture. It can also be customised to adjust exposure compensation, focal length and white balance.

Turning to the back of the camera, there’s a familiar array of button controls with four being marked Fn, indicating that they are customisable. One to the right of the natural resting place for your thumb is used to access the 4K Photo shooting modes (apart from Post Focus which is selected via the main menu).

Unlike the electronic viewfinder in Sony’s popular RX100 III and RX100 IV compact cameras with 1-inch type sensors, the TZ100’s electronic viewfinder is ready for action at any time that the camera is powered-up and it doesn’t need to be popped out for use. Although undoubtedly useful and a bonus on a pocketable compact camera, the TZ100’s viewfinder is small and you peer into it in a similar way to looking through the spyhole of a door to see what’s on the other side. Nevertheless the image is clear and sharp when the subject is in focus.

The main screen is also good and responds quickly to a touch. It’s just a shame that it’s not articulating or even tilting.

As yet we haven’t been able to shoot any images with the TZ100, but the sensor is the same as is in the FZ1000, which is one of the best bridge cameras available. The FZ1000 has a Leica DC Vario-Elmarit lens with a focal length range equivalent to 25-400mm and it’s a pretty big beast for a bridge camera. The TZ100’s lens is more modest with an equivalent range of 25-250mm and considerably smaller, but it’s also built following Leica’s quality standards in Panasonic’s factory so hopefully it should put in a similarly good performance.

I expect the TZ100 to produce well exposed images with pleasant colours in most situations, but we will test this fully along with everything else when we get a full production sample in the next few weeks. It will be especially interesting to look at the balance between noise and detail throughout the sensitivity range.

The TZ100 is expected to cost £170 (around US$257/AU$354) more than the TZ80 announced on the same day. To some this may seem strange given that the TZ80 has a much larger zoom range, equivalent to 24-720mm (30x) on a 35mm format camera. However, the TZ100 has a sensor that is 4x the size of the TZ80’s and this should mean that it is able to produce higher quality images with better noise control.

Sony’s RX100 range of compact cameras has proved immensely popular thanks to its 1-inch type sensor. The RX100 III and RX100 IV have proved especially popular because of their built-in viewfinder, though this has to be popped and the rear elements pulled out to be ready for use. The TZ100’s viewfinder is ready for action as soon as the camera is switched on. This and its large sensor, 10x zoom range, raw file shooting, advanced exposure modes and touchscreen control should make the TZ100 very popular. It’s going to be interesting see how its sales compare with the TZ80’s.