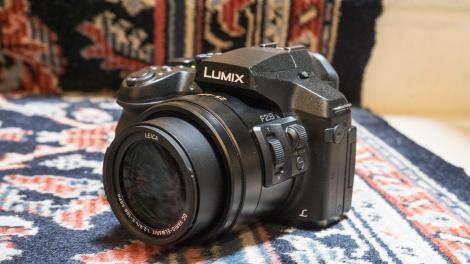 Although we’re always hearing about how the compact camera market has declined, bridge cameras are still very popular, and Panasonic has carved itself a healthy slice of the action. The FZ330 builds on the successes of the FZ200 (which continues in the line) by adding a few upgrades, including the 4K Photo modes also featured in the Panasonic G7 and GX8.

Like the FZ200, the FZ330 has a 1/2.3-inch High Sensitivity MOS sensor with 12.2million effective pixels. This is coupled with a new processing engine that extends the native sensitivity range to ISO 100-6400 – ISO 6400 is an expansion setting on the FZ200.

Also like the FZ200, the FZ330 has a Leica DC Vario-Elmarit lens with an effective focal length range of 25-600mm. That’s a fantastic range and opens up a wealth of creative opportunities, offering the ability to shoot everything from cramped interiors to distant wildlife as well as making the camera extremely versatile for landscapes and general shooting.

Another stand-out feature of the lens is its maximum aperture – a fast f/2.8 that’s constant throughout the zoom range. As well as enabling backgrounds to be nicely blurred in portraits, this means movement-freezing shutter speeds can be used even in fairly low light.

For those occasions when subject movement isn’t the issue, there’s an improved stabilisation system that works across 5 axes to reduce image blur at low shutter speeds or long focal lengths.

The FZ330’s wildlife-shooting potential is boosted by an increase in the autofocus speed, up from 0.14 sec with 120fps AF drive in the FZ200 to 0.09 sec and 240fps AF drive. The new camera also has Panasonic’s DFD (Depth from Defocus) technology, first seen in the GH4.

As mentioned, the FZ330 has 4K Photo with three modes: 4K Burst Shooting, 4K Burst (Start/Stop) and 4K Pre-burst. In these modes the FZ330 records 4K footage at 30 frames per second, but it’s possible to extract 8Mp still images in-camera. In 4K Burst Shooting mode the camera records for as long as the shutter release is pressed, while in 4K Burst (Start/Stop) mode recording is started and stopped with a press of the shutter release; in 4K Pre-burst mode the camera records 30 images immediately before and after the shutter button is pressed (it starts scanning from the moment the mode is selected), giving 60 shots from a two-second burst.

It’s also possible to shoot ‘normal’ 4K videos in MP4 format, as well as Full HD footage in MP4 or AVCHD format at up to 60p. This has necessitated an upgrade to the memory card port, which is now UHS-I and compatible with SDHC/SDXC cards.

The FZ330 is quite a bit bigger and a little heavier than the FZ200, but it’s also dust- and splash-proof, which means you can use it in a wider range of conditions.

In the style of the FZ200, the FZ330 has an SLR-like design with a deep, comfortable grip and a collection of button and dial controls scattered across its surface. Exposure mode is set via the large dial on the top plate, and there are the usual shortcut buttons on the back of the camera. As there are no zoom or focus rings on the lens, there are switches around the shutter release and on the lens for zooming in and out, plus a dial to adjust manual focus on the lens near the camera body.

In a first for a Panasonic bridge camera, the 3-inch 1,040,000-dot screen (the FZ200 has a 460,000-dot screen) is touch-sensitive. This makes adjusting settings quick and easy – especially as the screen is on a vari-angle joint, so can be seen and touched from a wide range of angles – and Panasonic’s Touchpad AF mode enables the AF point to be set via the screen while using the viewfinder.

As yet I haven’t used the FZ330 outside, so I can’t comment on how the screen copes in bright light, but indoors images are clear and detailed.

I haven’t been able to examine any images from the FZ330 yet, but it seems likely that it will produce very similar or slightly better images than the FZ200. I’ve found that although luminance noise is visible in images examined at 100% throughout the sensitivity range, the FZ200 generally produces good results.

Panasonic has a good handle on exposure and white balance, so I anticipate that the FZ330 will produce images with accurate colours and brightness, but naturally we’ll test it fully when we get a sample in for review.

The autofocus system in the pre-production sample I used seemed fast and accurate even in the low light conditions in which I handled it, which bodes well for performance in better light, and the improved stabilisation system should enable images to be taken using the long end of the lens without lens blur from camera shake; again, we’ll need to test the camera thoroughly to know for sure.

While it may not be a huge step up from the FZ200, the FZ330 has a better viewfinder and screen, along with touch control, faster response times and a weather-resistant build – and a focal length range equivalent to 25-600mm combined with a maximum aperture of f/2.8 is pretty compelling, opening up a huge range of photographic opportunities. Add the faster autofocusing to the mix, along with Touchpad AF, which enables you to set the AF point by touching the screen while looking through the viewfinder, and the FZ330 starts to shine out when set alongside its predecessor. While it may not convince FZ200 owners to upgrade, it makes an attractive alternative to first-time buyers.