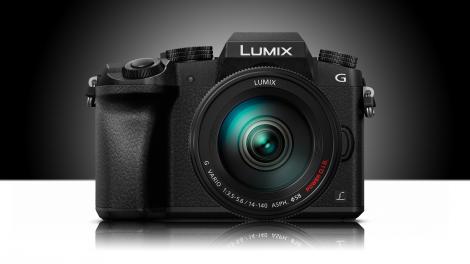 Replacing the Panasonic G6, the G7 sits beneath the Panasonic GH4 in the company’s line-up of compact system cameras. It’s the smaller of the two SLR-like models and is aimed at enthusiast photographers. It sits alongside the rectangular Panasonic GX7 and above the GF7, GM1 and GM5.

Every Panasonic interchangeable lens camera briefing recently seems to have started with the words ‘it’s got the same sensor as the GX7’, and it’s the same with the G7. This means the new camera has the same resolution as the camera it replaces, 16MP, but the sensor is newer (albeit still two years old). This sensor is coupled with the Venus Engine 9 processing engine found in the GH4 and, according to Panasonic’s Michiharu Uematsu, this combination produces the best image quality of any Panasonic camera. It also enables a native sensitivity range of ISO 200-25,600 with a low expansion setting of ISO 100. The G6 has a native range of ISO 160-12,800 with an expansion setting of 25,600, so we can assume an improvement in image quality at the higher sensitivity values.

The G7’s Venus Engine image has a quad-core CPU for faster processing and this enables full-resolution continuous shooting at 8 fps (frames per second) in Single-AF mode or 6fps in Continuous AF mode. That’s 1fps up on what the G6 can muster in each autofocus mode.

If you want to shoot at a faster rate you have to drop the image size to 8 million pixels –that’s still large enough to make A4 prints – and use the 4K Photo modes to shoot at 30fps. This uses the G7’s 4K video technology to shoot a sequence of images for up to 29 minutes 59 seconds. It’s then possible to extract the 8Mp still images from the footage in-camera.

Panasonic has also given the G7 the DFD (Depth from Defocus) focusing system first seen in the GH4. This system uses lens data and looks at the contrast of the scene at two different defocused points (images) to help it calculate the correct focus point more quickly. As with the GH4, Panasonic claims that this enables the G7 to achieve focus in just 0.07 sec, approximately half the time the G6 takes.

Although the G7 has Wi-Fi connectivity, in a surprise change from the G6 and in an effort to keep price down, there’s no NFC (near field communication).

Panasonic has given the G7 a more angular look than the G6 it replaces and there are a couple of changes to the control layout. On the top-plate, for example, there are two fairly large dials for making settings adjustments. The first of these surrounds the shutter release and replaces the Function Lever on the G6, while the second is towards the back of the plate and within reach of your right thumb. They both feel well made and the camera responds quickly to their use. The front dial is easier to use than the old Function Lever.

Over on the left side of the top-plate is a new drive mode dial, similar to the one on the GH4. This dial has an option to select 4K Photo mode, with the three options being selected by pressing the Menu/Set button at the centre of the navigation controls on the back of the camera.

As on the G6, the G7 has a vari-angle screen, as well as an electronic viewfinder (EVF), for composing and review images. With 2,360,000 dots the EVF has almost double the resolution of the G6’s finder and it’s an OLED (Organic Light-Emitting Diode) unit. It provides a good, clear view with plenty of detail. Meanwhile the 3-inch touch-sensitive screen has had a little boost up from 1,036,000-dots on the G6 to 1,040,000 on the G7. It is also very clear and responds to touch quickly, but I’ll have to use a full-production sample in bright light before I can comment upon how badly or not it suffers from reflections.

At the time of writing I have only used an early pre-production sample G7 that doesn’t have the final coatings and finish, but I will be using a unit that closer to a production sample for a day after the announcement and will update this preview when possible.

On the very early sample, some of the buttons on the back of the camera body were quite hard to locate with my thumb, but this may change with a final sample and familiarity is likely to make this less of an issue, but it’s something I’ll be checking when we get a production sample for testing.

When I tested the Panasonic GX7 back in August 2013 I found that it produced high quality images and noise is controlled well up to about ISO 6400, but speckling is visible at 100% in images taken at ISO 800 and higher. The GX7’s JPEG files have little chroma noise (coloured speckling), but there’s some luminance noise – variation in brightness. Some softening is also visible when ISO 3200 and above JPEG images are viewed at 100% and simultaneously captured raw files have a little chroma noise. However, it doesn’t really become a major problem until ISO 25,600 – which I would avoid using.

As the G7 uses the same sensor as the GX7 we can expect the image quality and noise control to be at least as good. However, bearing in mind that the new camera uses the processing engine from the top-end GH4, it could be a little better.

In the past we have found Panasonic’s G-series cameras have very good metering and white balance systems and this seems likely to continue with the G7, but we will test it fully to find out when a production sample becomes available.

So far I have only used a G7 in the gloomy confines of a windowless meeting room, but the autofocus system coped very well, getting the subject sharp quickly. It even managed to focus the lens in very dark conditions, but naturally it was more hesitant.

I will have the opportunity to shoot with a more up to date pre-production sample immediately after the camera’s announcement and will be able to comment upon the use and performance of the 4K Photo shooting modes in the very near future.

It’s unlikely that G6 users will feel tempted to upgrade to the G7, and some may feel that the changes brought by the new camera are a little pedestrian and predictable. However, the G7 showcases something that is likely to become more relevant to photographers over the next couple of years – 4K recording and the ability to extract 8Mp still images.

While the 4K Burst Shooting and 4K Burst (Start/Stop) modes may seem the most logical uses of the technology, 4K Pre-burst mode is likely to be the most useful to experienced stills photographers who are used to timing shots carefully. This mode records at 30 frames per second for just two seconds, one before the shutter release is pressed and one after, capturing 60 images in total. This should be sufficient to capture the correct bit of the action and provides scope for selecting the perfect moment/expression without giving the photographer hundreds or thousands of images to scroll through to find the one ideal shot.

Panasonic also continues to offer one of the most well-rounded feature sets available with a high quality OLED viewfinder, a vari-angle touch-screen, Wi-Fi connectivity and plenty of control over features.